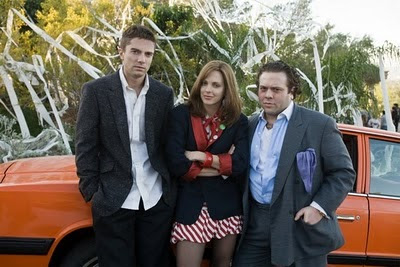 The old adage that everything is cyclical is especially apt in the case of “Take Me Home Tonight”, the new film from director Michael Dowse (“Fubar”). Not only is it an 80s nostalgia film, a genre that just won’t die, but it is also a throwback to raunchy, drug-addled, “one crazy night that changes everything” movies that, until “The Hangover” jumpstarted a revival, weren’t as prominent as they once were. It’s funny to compare “Take Me Home Tonight” to “The Hangover” because it actually predates Todd Phillips’s film by a couple of years. Originally shot in 2007, and titled “Kids In America”, “Take Me Home Tonight” sat on the shelf for a long time while the studio tried to figure out how to market a film that featured young people ingesting large amounts of the decade’s drug of choice, blow.


“Take Me Home Tonight” isn’t anything you haven’t seen before, in fact if you watched any movies made in the 1980s, especially anything John Hughes made involving teenagers, you know exactly what is going to happen. However, that doesn’t stop the movie from having some really big laughs, and a certain charm that does actually make you nostalgic for this kind of film. At first you’re afraid that the story, by a pair of writers from “That 70s Show” (remember the attempted spin off, “That 80s Show”, and what a miserable failure that was on every level?), is going to murder the premise within a few minutes with a faux “Fast Times at Ridgemont High” credits sequence, and forced catch phrases. It’s hard not to cringe when one character tells another that he’s “whipping it real good”. It’s worrisome to say the least. No one wants to sit through 90 minutes of Wang Chung jokes. Thankfully they drop this shtick after a few minutes.

Matt Franklin (Topher Grace) should be on his way to living his 80s yuppie, cocaine and big hair, Patrick Bateman “American Psycho” wet dream. He was the smart kid in high school, he went to MIT, and everyone, his family and himself included, expected big things. Instead, after college Matt works at a Suncoast Video at the mall, lives with his parents, and desperately hopes to run into Tori Frederking (Teresa Palmer), his high school crush who he never had the balls to ask out. She’s his white whale, his unicorn, and when this mythological beast wanders into his video store, Matt does what anyone in his situation would, he lies his ass off. She’s an investment banker, so he says he’s an investment banker, after ditching his Suncoast vest and nametag, of course. (By the way, they all went to Shermer High School, which is the name of the fictional town in Illinois where John Hughes set all of movies.)

With his chubby, curly-haired best buddy Barry (Dan Fogler), and his twin sister Wendy (Anna Faris), in tow, Matt sets out on the craziest night of his life. Over the course of the evening, your team steals a car, gets laid, has a dance off, gets into a fight, does some blow, wrecks the stolen car, and says things like “I’d really rather not spend tonight in L.A. County Jail giving some white supremacist a crying blowjob.” There are shenanigans aplenty. And if you’re familiar with the kind of movie they’re making here, the plot is pretty standard. Matt connects with Tori then offends her, and has to do something stupid and bold to prove to her, and to himself, that he’s a worthy mate; Barry, having just been fired from a job he hates, will have highs and lows, but ultimately wind up having the traditional “greatest night of my life”; and Wendy has her own life-changing revelation about her douchey, rich, popped-collar wearing boyfriend and her own future. Crazy, right?

Michael Biehn shows up as Matt’s cop father, and Angie Everhart has a small part a cougar who seduces Barry while her creepy, leather suit wearing, Eurotrash pal watches and giggles. While these two are awesome, there are a couple of wasted opportunities in the cameo department. Bob Odenkirk is Barry’s boss, but doesn’t say a word. His entire part consists of scowling once at Barry and drawing his finger across his throat menacingly. Michael Ian Black plays Tori’s skeevy, sexually harassing boss, but is really unused. He looks like a pompous jackass in his spectacles and bowtie, but that’s it.

Despite the predictability, “Take Me Home Tonight” winds up being a blast. The 80s theme is a little weary initially, but the characters, though familiar, are personable enough to keep you engaged, and again, did you read that white supremacist line? That kind of shit is all over the place. “Take Me Home Tonight” is raunchy and foul in all the right places, and cute and charming exactly where it should be. There is a discussion of “boob power”, important life lessons learned, and, as you can imagine, lives permanently altered.
Posted by Brent McKnight at 9:11 AM

I love when characters meet a girl and lie right off the bat. Matt lying about working at the video store was funny but he covered very well; nice script. I think everyone wants a do over with a girl but I don’t think anyone could screw it up as much as Matt. When I came across this on Blockbuster’s website I thought “hey, this looks great” but I couldn’t find the message by the end other than don’t be afraid of failing. Honestly the only redeeming quality is that the movie was free because I got my 3 month subscription to DVD’s by mail from Blockbuster as a new DISH Network customer. http://bit.ly/jYtohY Even though I’m an employee of DISH I still got the free membership.