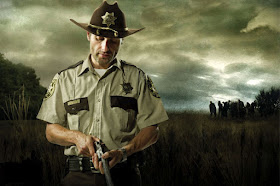 The second season of AMC’s zombie juggernaut “The Walking Dead”, now out on Blu-ray and DVD, is really a tale of two halves. Part one is chiefly concerned with the group, led by Rick Grimes (Andrew Lincoln), tracking down Sophia (Madison Lintz), a young girl in their party who gets lost amidst an undead swarm. The latter half of the season revolves around the escalating tension between Rick and Shane (John Bernthal).
Brent McKnight at 7:26 PM 1 comment:
Share 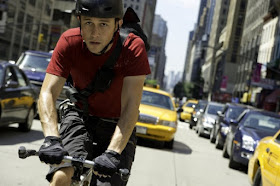 Hear that? That’s the sound of every bike messenger you’ve ever met getting a collective boner. While on paper writer/director David Koepp’s new movie “Premium Rush” sounds terrible, like they weren’t even trying to come up with a real narrative, the movie is actually a blast. It’s a hearty nod to 80’s underground sports movies like “Rad” and “Thrashin’”, though the most apt and obvious comparison is “Gleaming the Cube”. Those first two are ostensibly about the sports—BMX racing and skateboarding respectively—but “Gleaming the Cube” is a story where the characters just happen to be skate punks. “Premium Rush” is basically one long, extended chase scene, the primary characters simply happen to be New York City bike messengers.
Brent McKnight at 9:28 PM No comments:
Share 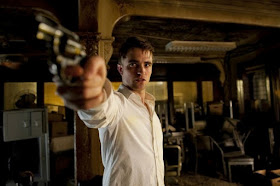 “Cosmopolis” is an interesting movie for a number of reasons. First and foremost is director David Cronenberg. That will always be a selling point. Second, it’s based on a Don Delillo novel, and while I have a hot and cold reaction the man’s work (loved “White Noise”, hated “Underworld”), his books are usually thought provoking at the very least. Finally, the film takes on a topic very much in the public eye, the current financial crisis, and with a strong anti-capitalist stance, it presets a viewpoint that you don’t often find in mainstream cinematic culture. While all of this is nice—that they’re trying to make a film that’s unique, that has a message—“Cosmopolis” isn’t a very good movie, and fails on a narrative level.
Brent McKnight at 9:25 PM 1 comment:
Share 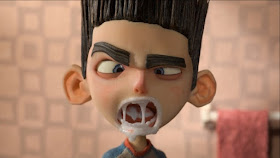 Packaged and marketed as a kid’s movie, “ParaNorman”, the new stop-motion animated offering from Laika—the folks behind “Coraline”—is everything you want out of this kind of movie. This is a horror movie aimed at children, one that is also funny, touching, and, most importantly, full of legitimate frights. Death—in the form of ghosts, zombies, corpses, and the potential for characters to die—is an ever-present specter. At every turn there’s a realistic chance that happily-ever-after might not happen. Scares blend with a strange gallows humor to create a fantastic movie that will get you as pumped up as it gets your kids. Horror fans will love this, as there are copious nods to the genre, including, but not limited to “Halloween”, “Friday the 13th”, and Romero’s “Dead” trilogy.
Brent McKnight at 3:50 PM No comments:
Share 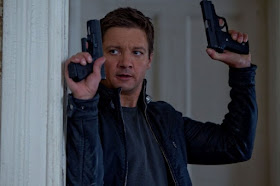 The legacy part of Tony Gilroy’s “The Bourne Legacy”—the new extension of the Robert Ludlum-based spy franchise—is forced and unnecessary. Throughout the film you get quick status updates on Jason Bourne. Someone mentions he was in Moscow recently, there’s a news report that he’s been involved in a shooting in New York, that sort of thing. Without actually appearing in the film, his presence looms large. You know it’s there to bind this installment to its predecessors, and once or twice would be fine, but this pattern persists. And it doesn’t stop at Bourne. Pamela Landy (Joan Allen), Noah Vosen (David Strathairn), Simon Ross (Paddy Considine), and more characters from the series, pop up for quick moments, for no other reason than to remind you that this is a “Bourne” movie.
Brent McKnight at 6:24 AM 2 comments:
Share

Walking into Len Wiseman’s “Total Recall”, you can’t help but wonder if you’re going to get a kickass action extravaganza or another unnecessary remake. To be honest, you get both. Best known for his “Underworld” movies, Wiseman is definitely a style-over-substance kind of director. For all their faults, however, his movies are never boring, and “Total Recall” is a slick science fiction actioner. It isn’t especially noteworthy, but neither is it terrible. This isn’t a film you need to see more than once, and even though it is ultimately forgettable, it keeps you entertained.
Brent McKnight at 1:57 PM No comments:
Share
‹
›
Home
View web version