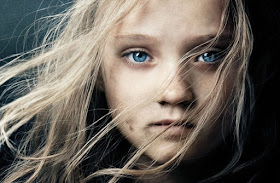 Having never read Victor Hugo’s novel, nor seen the legendary stage production, the vast majority of what I know about “Les Misérables” comes from an episode of “Animaniacs”. That said, I do love a good musical, and I rather enjoyed this long awaited film adaptation, though it is an up and down ride at times. Even if you’re not familiar with the play, you’ve heard these songs before, the cast is fantastic across the board, even people I don’t usually care for (Anne Hathaway, I’m looking at you), and the costumes and production design do a great job of making you feel like you’re in 19th century France. Everyone, even the upper class, are suitably grubby and smudged so that you believe they’ve spent their entire lives living in filth.

When it comes to watching film musicals, the characters lip-synching to their own voices, pantomiming the emotion they’re supposed to feel, is often a distraction. “Les Misérables” director Tom Hooper, however, insisted on recording his actors singing live. While this may not sound like a huge change, the difference is remarkable, and there is a much greater connection between the words coming out of their mouths, the movements of their bodies, and their facial expressions. It looks and sounds like people actually singing rather than acting, which is the whole point, especially for a movie where every single word is delivered via song. Okay, there are a handful of exceptions, but these are usually just a word or a short sentence, and it’s hard to sing two syllables.

The story of “Les Misérables” traces the life of Jean Valjean (Hugh Jackman). He begins the saga as a prisoner, a slave really, on the last day of a 19-year sentence for stealing bread to feed a starving child. But it’s tough on the outside for a con, and since he’s been dubbed a “dangerous man,” no one will hire him, no one wants him around, and he’ll be on parole for the rest of his natural born life. Out of everyone he encounters, only a priest shows him any kindness, which he then betrays, only to receive that much more benevolence from the man he wronged. Stunned at this reaction, Jean Valjean dedicates his life to doing good, no matter the personal cost.

From this point, from this moment of revelation, you follow Jean Valjean through various stages of his life. Each period presents him with escalating challenges to his faith. He befriends a dying prostitute, Fantine (Hathaway), and becomes guardian to her daughter, Cosette (played by Isabelle Allen and Amanda Seyfried). Because he was on parole, and no one would give him a legitimate shot, he walked away from his past to reinvent himself. Jean Valjean is, for all intents and purposes, dead. This isn’t going to stop local constable Javert (Russell Crowe) from doggedly pursuing the fugitive throughout the years, coming closer and closer each time they cross paths.

While Hooper’s choice to record all of voices live was a great one, many of his others don’t work nearly as well. He attempts to take possession of the story, to really make the film his own, and the result is that his fingerprints smear almost every frame. Sprawling wide shots, strange camera angles, close ups that cut you off from the rest of cast, and more clumsy camera work muddle things up. The close ups do work on occasion, like when Hathaway sings “I Dreamed a Dream”, which is haunting, but as a whole, it creates an uncomfortable claustrophobia.

You’d think something like “Les Misérables” would be ready made for a point-and-shoot approach. Not that it should be paint-by-numbers simple, mind you, but the strength is the music, that’s what people love, so why would you want to distract from that? We’re not talking a Baz Luhrmann flair for visual excess and flamboyance here, so a simple method would have worked better.

I know it’s in the source material, but the love story between Marius (Eddie Redmayne) and Cosette (Amanda Seyfried) has zero traction. No only do you not buy the love-at-first-site moment, which is tired, a cliché, and underdeveloped on its own, but the two actors have no romantic spark to speak of. Marius has a more earnest chemistry with all of his radical brothers in revolution, even though he turns out to be a rich kid playing at revolutionary.

On the other side of the coin, Sacha Baron Cohen and Helena Bonham Carter are terrific as Thénardier and his wife. Cosette’s original caretakers, the lecherous duo run a fleabag rooming house and tavern, the kind of place where the hookers pick your pockets, and you’ll walk away without a thread on your back or a cent to your name. Scumbags to be sure, they’re also fun time part people, and welcome comic relief in a bleak story of revolution, class warfare, extreme poverty, and a general sea of depressing themes. Cohen’s physical comedy chops serve him well here, and Bonham Carter’s shrill, witchy aesthetic is played up.

Jean Valjean’s life on the run creates some identity issues, and he has to figure out who he really is. Locked into a rigid personal code, one defined by the letter of the law, Javert is unable to accept that it is possible for a man to grow and evolve. Change is a traumatic, terrifying proposition, but he’s so inflexible in his stance that he’s little more than a one-trick-pony, with his fist shaking, “I’ll get you, Jean Valjean” rhetoric. The conclusion to his story should be a major emotional moment, but the way it is filmed denies the character any redemption.

For all its flaws, “Les Misérables” is strong, moving musical. I don’t know that it should be in the running for a best picture Academy Award or not, like many people seem to think, but it’s pretty damn good. An intricate layer of musical themes and cues, notes and songs repeat and reappear, connecting the characters, stories, and historical epochs. The Wachowski’s “Cloud Atlas” borrows this technique to great effect, and this tactic creates a through line that uses music and song as a driving force behind the narrative.
Brent McKnight at 2:35 PM
Share