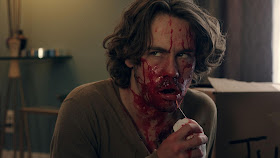 You might think a movie with three total characters—four if you count an occasional narrator—is, by necessity, simple and straightforward. After all, how much intrigue can a trio of early twenty-somethings really get up to? Maybe cool your jets a second, Hoss, and give Rob Grant’s thriller Harpoon a try.

At its core, Harpoon looks at friendship. Specifically the kind of friendships many of us have where we’re friends with people not because we love them, enjoy their company, or derive any use or pleasure from the connection, but simply because we’ve always been friends. They’ve just always been there. Occasionally we wonder why we’re still friends with these people, if it’s worth the effort, if we’re even actually still friends, or if, had we met this person today, would we have become friends in the first place? 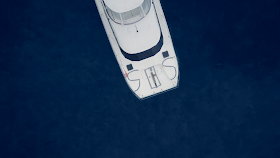 Harpoon focuses on three friends. There’s Jonah (Munro Chambers, Turbo Kid), an indecisive milquetoast who would probably still live with his parents if they hadn’t died in a recent car crash. Richard (Christopher Gray), is Jonah’s long-time best friend, a rich kid with a hot temper who uses his vast familial resources to smooth over his sporadic outbursts. Then we have Sasha (Emily Tyra), Richard’s long-time girlfriend, also a staple in Jonah’s life, who for some reason tolerates Richard and all of his nonsense. There’s also a dry, droll, sarcastic overhead narrator, voiced by Brett Gelman, who chimes in from time to time with new tidbits and observations.

The action begins with Richard, having misread a text message exchange between the other two and jumped to conclusions, beating the shit out of Jonah as he cleans out his dead parents’ house. True to form, to make up for this misdeed, he takes everyone out on his boat for the day. When they become stranded, far from shipping lanes or other aquatic traffic, and perilously low on supplies, all sorts of secrets, deceptions, rivalries, and tensions, sexual and otherwise, boil to the surface in dark, twisted, usually violent fashion. The plot does prominently feature a speargun. 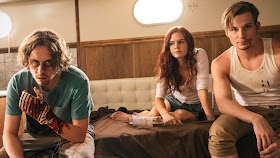 Even with just three players, Harpoon constantly shifts, evolves, and changes tack. Throughout, new information and reveals come to light that drastically alter how we view the characters and how they view each other. And it all happens in organic, naturalistic fashion—the script from Grant and Mike Kovac doesn’t just drop bombs to drop bombs. They all build on top of one another, one secret leads to the exposure of another, which leads to another and so on. Even as things escalate to near-absurdity, and beyond, the narrative generally earns each turn of the screw. Or at least moves fast enough not to care.

Things get downright nasty and gleefully mean-spirited—there’s no shortage of blood and brutality to satiate the horror fanatics in the crowd. But it’s also funny as hell, bursting with dark, vicious comedy. The three actors have a good chemistry and their relationship feels lived-in and authentic. They have the kind of familiar humor that friends develop over time, with in jokes, comic rhythms, and established roles. But that also means they know how to push each other’s buttons and precisely what to say to cause the deepest wounds. 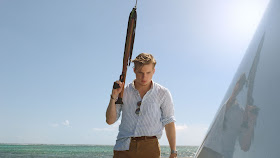 This line between horror and comedy can be a tricky one to tread, and if your aim is off on either side, the results are often not pretty. But Harpoon’s aim is largely true—if it does miss, it doesn’t often. It comes close to tumbling into unrealistic territory, and for some it might tip into incredulity, but largely it keeps things just real enough that it maintains control.

Some viewers might take issue with the twists and turns. For the most part, the pace trucks right along, bloody and rapid, so there’s not much time to get hung up. Though the pace does falter and slow a bit in the middle, and maybe some of the cracks start to show. By that point, most people should be on board enough that it’s a relatively minor infraction. And once it picks up steam again, it barrels to an appropriate, O. Henry style end that’s wholly fitting.

Dark and mean, uproarious and brutal, soaked in blood and steeped in long-expired friendship, Harpoon is a fine time. There are moments to laugh, sigh, and cringe. Grant uses confined space and a small cast to craft a gory, savage black comedy potboiler, with riotous, unruly results.