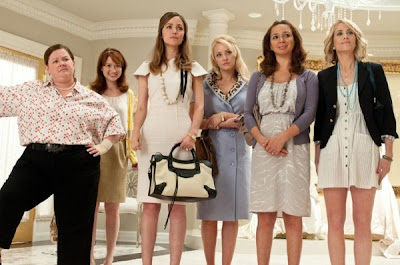 
If I still have your attention, now we can talk about “Bridesmaids”.

When you walk into a movie directed by Paul Feig and produced by Judd Apatow, you know pretty much what you’re going to get. There will be an ensemble cast of collected miscreants, crude humor of the dick and fart variety, and gems of off-the-cuff comedic improvisation. For a while the story will truck along, full of shenanigans and poop jokes, then it will take a serious turn when the two central figures decide they don’t want to be friends anymore, or break up if the film is more romantic in tone, and everything wraps up with some heavy-handed resolution where everybody hugs. It’s a formula for sure, but one that met with great success in “Superbad”, “Knocked Up”, and “The 40-Year-Old Virgin”, among others. Those movies are funny as hell, and you’re not watching them for story anyway, you’re watching them for boner jokes. “Bridesmaids” falls into this same category, though admittedly, with fewer actual boner jokes.

Initially, I was afraid that “Bridesmaids” was going to be atrocious. Part of this I chalk up to Krisen Wiig, the star and co-writer. I just don’t like her, never have. I couldn’t stand her on “Saturday Night Live”, and everything she’s done since has met with a similar reaction. There’s something about her demeanor and delivery that, not only isn’t funny, but actually makes me mad most of the time. Basically, I’m not a fan. The other part of my worry stemmed from the fact that set up is so tired, so fucking hackneyed, that it’s painful. Imagine every romantic comedy or sitcom ever made about marriage and you know the story. Wiig plays Annie. Her lifelong best friend Lillian (Maya Rudolph) announces that she’s going to get married and wants Annie to be her maid of honor. There is drama with the other bridesmaids. Annie’s life is in the crapper, she has a creepy roommate who reads her diary, and she feels like she’s drifting away from Lillian.

“Bridesmaids” meanders on like this for a while, driving home the fact that Annie is unlucky in business, love, and life. There are some light chuckles, the best of which are obviously spontaneous moments between Wiig and Rudolph, who do have a nice chemistry, but you dread where this is going next. Then a funny thing happens, “Bridesmaids” gets good, really good. The turning point is the scene that combines trying on bridesmaid’s dresses and an intense bout of collective food poisoning. There is excellent, and inventive use of both vomit and diarrhea that really take the film up a notch, and this scene serves as an icebreaker. Until this point “Bridesmaids” is playing it safe, but this is the moment where it unfurls its true colors. This is like the first time you see a new love interest with the flu. After blowing snot in front of you for hours they can’t pretend to be all cutesy and perfect anymore, and from there, things are different. In the case of “Bridesmaids”, things get out of hand quickly and descend into a raunchy, raunchy place.

It’s not all smooth sailing, though, and the film is uneven, and frequently mires down in schmaltz. The characters in the bridal party are like a who’s who of threadbare wedding movie types. Rose Byrne is the rich, pushy snob; Wendi McLendon-Covey is the haggard bitch who hates her husband and kids, and just wants to see strippers; Ellie Kemper is the idealistic woman-child who went to Disneyland on her honeymoon; and Melissa McCarthy is, well, the fat one. There are times when McCarthy almost becomes one of the characters from “The Fatties”, Jack Black’s spoof movies from “Tropic Thunder”. Each of the women get a scene where they get to break out of the mold, either comically or emotionally, but for the most part they’re props, not characters.

And for my money the sweetness in “Bridesmaids” is forced. Okay, not entirely. Annie meets Officer Rhodes (Chris O’Dowd)—who is Irish even though I spent the entire movie trying to decide if he was Canadian or not—a goofy-but-loveable State Trooper who likes Annie for Annie, even if she can’t see that. Wiig and O’Dowd are good together on screen, doubly impressive given my overall distaste for Wiig, and their relationship provides the most authentic connection in the entire film. Problems arise out of nowhere when Rhodes starts acting completely out of character, and you’re well aware that the movie only forces them apart to set up a triumphant reunion. This is a staple of Apatowian (I might trademark that) cinema, and while it has worked in the past, it’s a cheap trick in “Bridesmaids”.

I don’t mean to sound overly disparaging, because “Bridesmaids” is damn funny. It’s just easier to talk about the problems because I don’t want to give away any of the golden moment that you need to discover for yourself. While it takes a while to get there, “Bridesmaids” definitely arrives. If nothing else, this film is solid proof that gross out humor is not the exclusive property of the male gender (I didn’t even think that was a question anymore, but apparently I was wrong). The ladies want to get in on the act, too, and with “Bridesmaids” they do so in a big way. Wiig’s script, written along with Annie Mumolo, defies genre tropes and takes vulgarity in unexpected directions. I’ll just say this, the bachelorette party in Vegas doesn’t go down anything like you anticipate.
Posted by Brent McKnight at 5:25 PM