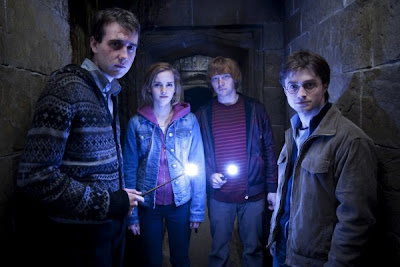 “Deathly Hallows: Part 2” definitely stands on the shoulders of the films before it. Picking up where “Part 1” ended, there is little time wasted on story, set up, character, or any of those pesky elements. If you haven’t watched the earlier movies, you won’t have much idea what’s going on, but really, what are you doing jumping into a series with the eighth installment? That’s like watching “Jason Takes Manhattan” first, and you have more sense than that. Before long you’re with Harry (Daniel Radcliffe), Hermione (Emma Watson), Ron (Rupert Grint), and a goblin, on a ride that is best described as a combination of an amusement park roller coaster and the coal car ride from “Temple of Doom”, only slightly more magical. The trio of friends is still neck deep in their quest to find and destroy all of Lord Voldemort’s (Ralph Fiennes) horcruxes, little trinkets where the evil wizard hid broken off chunks of his soul in order that he can never be truly killed. As Voldemort, backed into a corner, lashes out, wreaking havoc on the wizarding world, our heroes’ search leads them back to Hogwarts Academy of Witchcraft and Wizardry. Once a hopeful place, the school is now dark and dour, firmly under the control of the Dark Lord.

Everything in “Deathly Hallows: Part 2” builds towards the inevitable, to an epic clash of good versus evil where the fate of the entire world rests on the outcome. The whole film feels like a final chapter, and there are obvious parallels to other series ending films, like “Return of the Jedi” and “Return of the King”. The story quickly builds into a fierce, sprawling battle that comprises the bulk of the film, but while the majority of the cast of characters are engaged in a vicious fight for survival, the hero is on an ancillary quest, one that is both deeply personal, but also holds the key to ultimate victory for the forces of good. Like Luke on the Death Star and Frodo in Mordor, Harry must hunt down and destroy Voldemort, while the Battle of Hogwarts rages on the periphery.

“Deathly Hallows: Part 2” alternates between dark and moody scenes, and sweeping, all out war. Heavy with the weight of the world, Harry is surrounded by dead friends, destruction, and despair. I’m not too proud to admit, even though the film glosses over a couple of the heavier emotional parts from the book, I got misty a couple of times. Just because I look like a hobo doesn’t mean I don’t have an irrational bond to imaginary teenage wizards. Fans bring a hanky.

There are a couple of times where the schmaltz and melodrama almost become too much to bear, where you’re teetering on the verge of an episode of “The OC”, and I mean the crazy-ass later episodes when everything went off the rails. Luckily the pace never flags for long, and you’re never far away from something exploding, a sinister spell being cast, or a tragic occurrence. Near the conclusion there plot does veer off into a metaphysical meandering aside, but they had to do that because it’s in the book, and though it is strained and weird, it allows you to catch your breath for a moment before shit really hits the fan. I’m actually kind of proud of director David Yates and screenwriter Steve Kloves because they don’t let this moment get out of hand (in the book it goes on too long and seriously impacts the momentum of the story), and they handle the awkward, tacked-on epilogue from the book as well as can be expected. In the book the awkward, tacked-on epilogue rivals the awkward, tacked on epilogue from “Return of the King” for awkwardness and tacked-on-itude, but “Deathly Hallows: Part 2” streamlines it as much as possible and it is relatively painless.

So before you shed a tear for the end of a franchise, all you Harry Potter nuts out there in TV land should get to your local megaplex, sit back in one of those newfangled stadium seats that are so much more comfortable than any piece of furniture I’ve ever owned, and soak in all of the dragon riding, snake fighting, magic dueling, action and adventure of “Harry Potter and the Deathly Hallows: Part 2”. It is an epic end to one of the most adored, and profitable, film families since “Star Wars”.

All of my earlier talk about awkward, tacked-on endings makes me want to add one of my own, so here goes. If you can, go see “Harry Potter and the Deathly Hallows: Part 2” in standard, 2D. The 3D is not bad, or terribly intrusive (though there is one nausea inducing scene where the camera swirls nonstop around Harry, Hermione, and Ron, who are standing completely still), but it adds little or nothing to the experience. In fact, the design of the 3D glasses almost ruined the whole thing for me. They’re modeled after Harry’s circular spectacles, which is actually clever and kind of neat, but the problem is that they’re also the same size as Harry’s glasses. One, if you wear glasses you’re screwed and will spend most of movie desperately trying to keep the damn things on your face; and two, even if you don’t wear glasses, the lenses are so small that your field of vision is restricted to a ridiculous degree. If you don’t look straight ahead at all times, your eyes will stray across the boundaries of 3D into a fuzzed out blurry realm. There, that’s my rant for the day; make of it what you will.
Posted by Brent McKnight at 4:19 PM