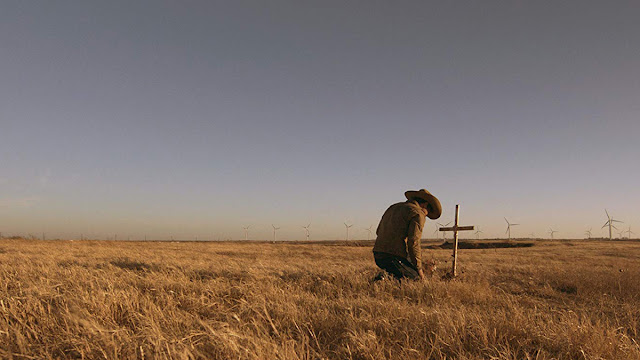 On the surface, The Bygone looks made for me. A sparse, gritty neo-western about clashing cultures, a disappearing way of life, hard-scrabble folk scraping to get by in a desolate land, all capped off with the potential for violence lurking just out of sight. The problem with the debut feature from brother co-director and co-writers Graham and Parker Phillips (Graham also stars) is that generally all it offers are surface elements, with little waiting below. In many ways, it’s a strong debut, in others, not so much.

Aesthetically, The Bygone is a gorgeous film. Working with cinematographer David J. Myrick, the brothers Graham paint a lovely picture. Set along the fracking belt in eastern Montana and the western Dakotas, they capture the stark beauty of the region, using the images of expansive plains full of wind turbines and oil rigs to visually set up the conflict between old and new. Sunset landscape shots speckled with burning oil flares against the evening sky are haunting.

[Related Reading: 'The Bygone' Trailer: This Grim Modern Western Should Have Left When it Had the Chance] 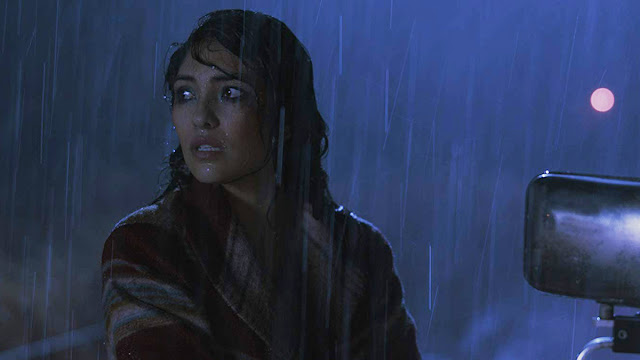 But while the film looks great, it lacks the matching internal life. The script has a great deal it wants to say, but winds up not saying much of anything. It begins with a quote about the epidemic of sexual violence against and human trafficking of Native American women, which sets a mood for sure. When Kip (Graham Phillips), a young, generational rancher, crosses paths with Waniya (Sydney Schafer), a young Lakota woman working against her will at a brothel, they form an uneasy trust. When she disappears, he attempts to track her down, only to discover this story has a much wider reach than he thought.

There are serious issues with the story in a variety of ways. Kip is the protagonist, but he’s also an obvious white savior trying to rescue Waniya in multiple ways. (There are hints that his deceased mother was Native American, but he's presented and coded as an archetype white hat-wearing cowboy hero.) Even though the script makes Waniya capable and strong in her own right, it plays primarily like a tired damsel in distress narrative. What's going on with the murder and disappearances of Native women is a huge issue, one not nearly enough people talk about, but again, while the movie touches on that, it's never addressed in any substantive way or even mentioned explicitly outside of the opening title card. We see the slow death of a way of life as Kip’s family ranch struggles to get by, but never explores that. It juxtaposes native cultures with that of the colonizers who usurped their land so long ago. The Bygone wants so bad to make a point about sexual assaulte and human trafficking, changing times, still-festering cultural wounds and resentments, and rampant racism, among other topics, but outside of pointing this things out, there’s not much beyond lip service. 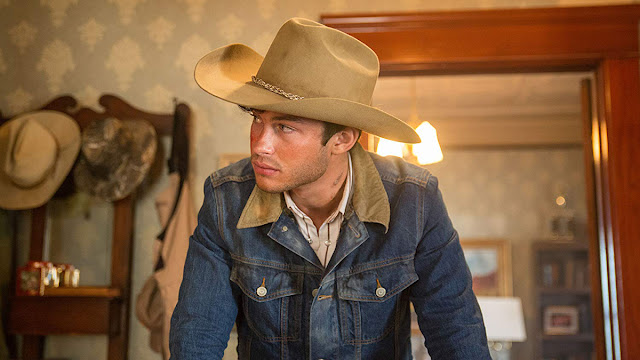 Graham Parker has a long resume as an actor, appearing in Riverdale, The Little Mermaid Live, The Good Wife, and tons more. So the brothers assembled a strong cast with the likes of Shawn Hatosy (Animal Kingdom) as the brutal pimp Paris, Jacqueline Toboni (Grimm) plays the equally vicious prostitute Jamie, and Jamie McShane (Bloodline) and Ritchie Coster (Happy) play Kip’s father and uncle, respectively.

While the actors all do an admirable job, it again, like so much here, all kind of rings empty. Though it’s visually appealing, the whole film plays like collection of clichés, like a caricature of a Cormac McCarthy novel or Taylor Sheridan film. It attempts to depict a place and a way of life that it doesn’t feel the creators know. The film hits the markers—there’s a half empty hotel swimming pool, the characters spout weary sounding bits of local wisdom, the primary antagonist has quirks like insisting he drive a Volvo in the heart of big truck country—but they’re more window dressing than substance. 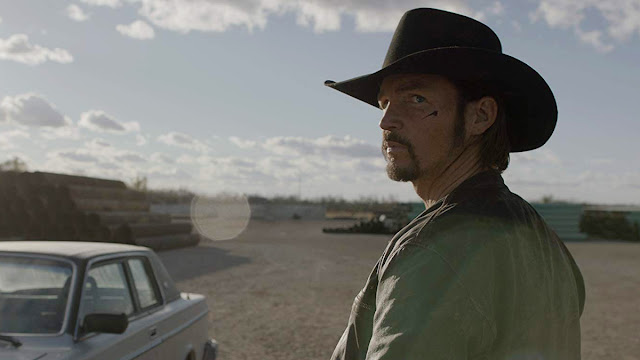 As the adage goes, still waters run deep, but The Bygone mistakes silence and quiet for depth, and we’re left with long, worried looks that…just look worried. It’s difficult to envision much beyond that, especially in Kip’s case. The bond between Kip and Waniya comes across more as what needs to happen in the story than natural in any way. It doesn’t help that Kip disappears from the narrative for a huge chunk of the middle act, as the film focuses on a local sheriff (Mike McColl) as he hunts Paris and the strife between Kip’s father and uncle.

For all its issues, climax of The Bygone is its strongest moment. Once Kip emerges back into the picture, the plot takes a drastic turn. While not wholly established or earned, it offers a tense, compelling peak and essentially becomes a crazy ass horror movie for a couple of scenes. 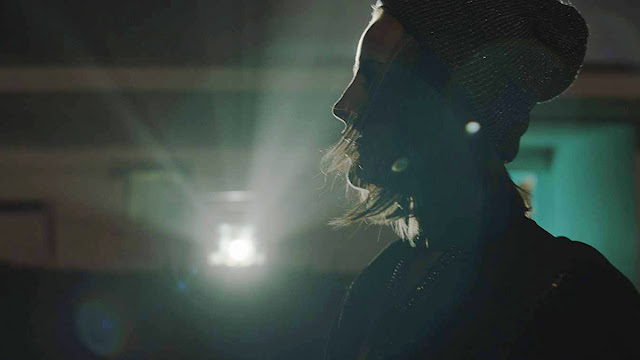 The Bygone is a frustrating watch because the possibilities are right there, but never quite materialize. With positive elements, and a sound grasp of the mechanics and technical side, Graham and Parker Phillips show definite potential. Their first feature, they’re also both only in their mid-20s and have tons of room to grow, especially in terms of story, character, and structure. But this is also the kind of movie that, though flawed, shows if they find the right script, we might see big things. [Grade: C]

Posted by Brent McKnight at 3:17 PM

No armadillos in Nort dakoahtah

The dialect is so difficlt for some non-natives

The ending was wack. A lot of it was weak. A man is not going let you do that to him.

You missed that Kip's mother was Lakota, making him half Lakota, so not exactly white savior.

Didn't miss that. As it says in the review, there's a throw away line about his mother being Lakota, but it's also one line when the entire rest of the movie presents him and portrays him as exactly the archetype white savior.

Beautifully stunning in visions. Initially confused as to whether it was a period piece or present day, until the GMC Sierra popped up! Also, was confused about location. Thought it was Oklahoma or panhandle Texas, nothing indicated Montana/Dakotas, unless I missed the reference. Overall, solid movie for a late night YouTube surfing. Enjoy.