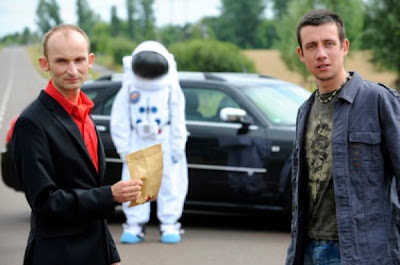 One of the coolest things about the Maelstrom International Fantastic Movie Festival is the shorts program. There were an absurd number of them, almost fifty, broken up into genre-specific chunks—a fantasy, animation, horror, and science fiction block. These are films that you’re not likely to see many other places. In a general sense shorts are wildly hit and miss—there are some great ones, but to get to them you have to sift through a crap load of garbage.

“R.O.A.C.H.” owes a large and obvious debt to a slew of sci-fi forbearers, most notably “Blade Runner”. Right out of the gate the influence is apparent thematically, tonally, and visually—some of the make up choices mimic that of the replicants from “Blade Runner”. Hell, the main villain is even named Deckard. There is also a healthy dose of “Matrix”, as well as the teensiest bit of “Fifth Element” thrown in for good measure.

The year is 2068, and the state of New Minsk has become an ultra-technocracy. Corporations rule everything, and the only freedom is found online, where hackers are freedom fighters, and resistance groups scream their pirate broadcasts from their digital soapboxes. There is also a nameless wanderer, a genetically engineered soldier and escapee from a government project. While rouge journalists and dissident computer junkies fight corruption, the warrior searches for a lost love while being hunted by the government.

“R.O.A.C.H” is a definite case of style over substance. So much time is spent on aesthetic concerns, the look and texture of the film, that the rest is jumbled and nonsensical. Three stories intertwine, and as a result “R.O.A.C.H” is scattered and unfocused. You never know or care about any of the characters, and by the time the film finally gets around to a shootout and a fight scene, you’re disenchanted by the vague anti-authoritarian posturing that ultimately doesn’t mean anything, and even what turns out to be a decent action sequence can’t pique your interest.

The first thing you notice about “Alley Dog” is the grim, gritty character of the animation. From the look alone you get a feel for the time and place. This is a future world where dirty, seedy back alleys cut like veins through a city with pretenses of being modern, clean, and safe. The filth and garbage contrast with immaculate, sleek, steel-and-chrome buildings that the city puts up as a public face.

These hidden pathways are home to a stray mechanical dog, a robotic canine foraging for whatever it uses as sustenance, and the action is chiefly concerned with the pursuit of his prey. There are no words, and no more story than that in “Alley Dog”, but from the look alone there is a dystopian sentiment to the film. How things came to this is never addressed, but however this world came to be, it is the type of place full of unattended robot creatures roaming unchecked and homeless.

In “Arthur”, what initially appears to be a simple story of a child’s foray into escapist imagination takes a much darker turn. When Arthur, a young boy with a bowl cut who hangs out in dinosaur pajamas and tinfoil armor, envisions himself as the heroic King Arthur of legend, he must battle a hideous creature in order to save a damsel in distress. Sounds pretty straight forward, right? However, when the film comes back to reality it turns out that there is a horrifying parallel to Arthur’s fantasy in his real life, one that is much more insidious, terrifying, and troubling than any fantastic monster.

Hats off to the producers of “Arthur” for taking what you first expect to be just a semi-cute little of a bored child trying to deal with a stale, mundane existence, and spinning it in such a way as to lend it a sharp emotional punch with a surprising number of unexpected shifts. While “Arthur” works in the realm of fantasy, the film is solidly grounded, which creates a great impact for so brief a film. This is easily one of my favorites shorts of MIFFF.

“Juan Con Miedo” starts off with children playing. A young boy, Juan, wanders off with a strange young girl, Mary. A creepy old man follows them, so they hide out in a rundown, ramshackle old house that, believe it or not, may be haunted. This is house that everyone in the neighborhood whispers about, that everyone has heard the urban legends about.

Parts of “Juan Con Miedo” are spooky enough to make for a successful ghostly tale—like a nice scarecrow attack—but, even at eleven minutes, the film is too long. There is too much set up and not enough payoff. It takes forever to get the kids into the house, which is where the real story begins. In a feature length film you can dilly dally and get away with wasting time, but in a short you need to hurry up and get to the point already.

Lonely has an imaginary friend named Bob. Bob has been around Lonely’s entire life, and is really his only friend, the only one Lonley has ever been able to depend on. To call their relationship dysfunctional is an understatement. Upon first meeting, they strike a deal where Bob will change Lonely’s life for the better. Whether or not this is true is a debatable point, but Bob has been the most important figure in Lonely’s life since childhood. All of this changes, however, when Lonely meets a strange, sultry woman, thus negating their bargain.

While the childhood trauma element of “Lonely” is heavy handed—the protagonist is named Lonely after all—the film has a cool ambiance and feel. Think psychological supernatural noir. Despite some ups and downs—the notes I took when I watched it say, “about half really awesome”—“Lonely” ends up a decent attempt at a creating a dark cerebral thriller.

You have two choices: suicide, or the arcade. Let’s be clear, this second option is a metaphysical arcade where a troubled teen hangs out with death, trying to break the record and talk his way into another chance, a new life as it were. Right away you can tell that this kid is into some dark stuff. Aside from being all buddy buddy with the grim reaper, he has lots of old, sinister looking leather bound books, draws spooky pictures on the ground in chalk, and sacrifices pigs in the cemetery.

For all the hemming and hawing and abstract philosophical posturing, “Pinball” never reaches any conclusions. To be honest it never really comes to any deeper conclusion than, “life is a lot like a game of pinball.”

“The Astronaut on the Roof”

Without a doubt “The Astronaut on the Roof” is my favorite short film at MIFFF. Against all odds it combines a road movie and bank heists with a post-modern take on the creative process. I know, I know, I know, that sounds boring and pretentious, and it should be, but “Astronaut” is sharp and fun, and clever as all hell.

Like a script, the film starts as nothing, as a blank page, where everything is possible. Two writers banter and narrate back and forth, and as they bounce ideas back and forth, working through plot holes, narratives slumps, and character decisions, their ideas spring to life on screen. Each writer has a different goal, one wants to make an arty homage to Godard, while the other wants a ninja-filled action opus, and they throw wrinkles and curve balls into each other’s ideas. The story loops back and forth, folding in on top of itself, over and over again. Structurally “The Astronaut on the Roof” is really quite ingenious, and, despite the metaphysical asides, it is a damn fine time.
Posted by Brent McKnight at 6:22 PM