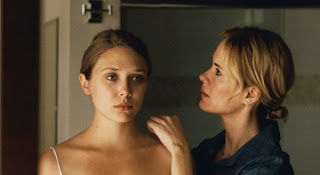 The haunting string arrangement over the opening credits of Sean Durkin’s thriller “Martha Marcy May Marlene” stirs definite echoes Hitchcock. In this case it makes a certain amount of sense to evoke the master of cinematic tension. The film is a long, slow build, where the pressure and apprehension grows and increases steadily throughout, wrapping you in a tight squeezing grip.
Besides ratcheting up the weight on your nerves, “Martha Marcy May Marlene” is getting a lot of notice in the press for one central reason. Let’s just say that it’s not the type of movie that “US Weekly” usually gives much attention to, but the quiet little indie piece is all over the latest issue. This big reason is because the star of the film, the titular Martha and Marcy May and Marlene, is an Olsen sister. Not an Olsen Twin, mind you, but their sister Elizabeth. Who knew that what Mary-Kate and Ashley apparently have in marketing acumen and ability to shill themselves, their younger sibling has equal talent in regards to acting. I have to admit that I didn’t see that one coming.
Olsen’s familial associations may add some fuel to the marketing press of “Martha Marcy May Marlene”, but the accolades she’s garnering for her performance are certainly well deserved. She carries the entire film on her shoulders, and her portrayal of Martha, a damaged young woman trying to escape the clutches of a violent cult while simultaneously trying to repair her relationship with her uptight, estranged sister Lucy (Sarah Paulson), is easily one of the best performances of the year. It’s hard to believe that this is only her second major role.
John Hawkes (“Winter’s Bone”) plays Patrick, the charismatic leader of the Manson-esque cult in rural New York. He’s takes in disenfranchised young people, renaming the girls—hence Martha becomes Marcy May—and filling a need in their troubled lives. All the while he brainwashes and sexually abuses the female members of his congregation. Hawkes is as magnetic as he is dangerous and unsettling. Lucy hasn’t seen or heard from Martha in years, and when she calls out of the blue, the two sisters are reunited, though the well-to-do, neo-hippie liberal Lucy has as much trouble readjusting to Martha as Martha has coming from the other direction.
The best trick of “Martha Marcy May Marlene” is how these two narrative threads intertwine. Both timelines—Martha’s time with the cult, and her reintroduction to her family—unfold concurrently and climb through their respective story arcs. The two plotlines are woven together so tightly that the film cuts back and forth between them not only within scenes, but also seemingly within single shots. The match edits, transitions, and story structure are handled with a deft, masterful touch. It flows back and forth in time with an effortless efficiency, encompassing the drama of Martha’s escape and family reconciliation, and her fragile mental state and increasing paranoia.
There are uncomfortable parallels between Martha’s past and present in more than just an aesthetic sense. Lucy’s husband, Ted (Hugh Dancy) is, much like Patrick, a creepy dude. He also has a twisted sense of what behavior is and is not acceptable, and tries to force his worldview and ethics onto her, dismissing her guarded, unraveling psyche as simply “insane”. Patrick and Ted are similarly tyrannical, initially welcoming and caring, though their true natures shine through soon enough.
There are a ton of wonderful elements in “Martha Marcy May Marlene”, a few I might even be tempted to describe as brilliant or inspired or some analogous word more at home in a blurb on a theater poster or DVD box cover. However, despite all the film has going for it, it never coalesces and comes together like it needs to. It is still an excellent film, one that is definitely worth watching—if for nothing else to witness Olsen, a refreshing new talent who should bring movie fans some big things in the coming years—but the pieces never quite add up. You’re left slightly unsatisfied, and as a result the overall effect is a bit muddy. I saw “Martha Marcy May Marlene” in August, and I’m still trying to wrap my brain around my partial ambivalence. At times it is a powerful and moving emotional thriller, but other times it left me flat, and I found myself wanting something more.
Posted by Brent McKnight at 3:41 PM