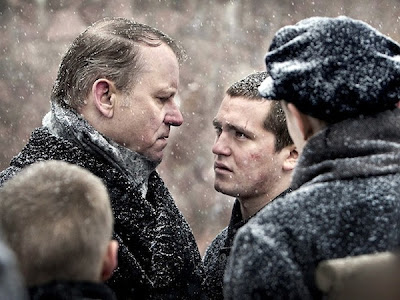 
Bastøy Island is a Norwegian reform school, essentially a juvenile detention facility on an island in the middle of the frigid northern seas. In 1915 things that can get a young man sent to this frozen rock include stealing from the church donation box, murder, and everything in between. Bastøy is a real place, though now it is an actual prison, and is trying to become the first green prison.

When Erling (Benjamin Helstad) arrives on the island, he changes everything. Not content to fall neatly in line and do his time quietly, he rocks the boat, tries to escape, and generally makes life harder for everyone around him, including short-timer Olav (Trond Nilssen). Erling is headstrong and tough, a harpooner on a whaling ship who killed someone, though that subject is never addressed directly. Olav is the first mate on this metaphorical ship. He’s been on the island for six years, for stealing what amounts to pocket change, and only wants to keep his head down and get the hell out.

The Bastøy boys are subjected to all manner of cruelty: restricted rations, working outdoors in frigid conditions with no warm clothes, whippings, and performing pointless tasks like moving a pile of rocks from one spot to another then back again, among other torments. They’re abused physically, mentally, and, occasionally sexually. The headmaster (Stellan Skarsgård) lords over the boys with a holier-than-thou god complex, all the while siphoning funds away from his wards to appease his young, materialistic wife. Bråthen (Kristoffer Joner) is a creepy, cruel pedophile that preys on the weak who can’t take care of themselves. After an initial rocky start, Erling and Olav become close friends, and inspire the boys around them to stand up against the brutality they endure.

Nothing inherent to this plot sets this apart from countless other movies and stories of fighting back against your oppressors. Where “King of Devil’s Island” distinguishes itself is not in the end result. Like I said, you see that coming from the very first frames. When you know the end, the film becomes more about the journey, about the boys, their relationships, hopes, and dreams. This is most apparent in a thread that runs through the movie. Erling can’t read, so Olav helps him write letters they can’t send to an unnamed female presence. More than a letter the two growing allies craft a fantastic story that recasts their circumstances as a whaling adventure. They find a brief bit of respite, of escape in these words, in direct conflict with the headmaster’s assurances that, “Escape is nothing but a childish fantasy.”

Along the way, the inmates of Bastøy learn all of the lessons their hypocritically religious captors try to force upon them. The boys learn all about dedication, devotion, self-sacrifice, teamwork, and, most importantly, compassion. Over time they build a sense of self, a sense of unity of purpose, and a collective identity, so that, when the breaking point arrives, it is less about organized resistance than collective outrage. It is not that one person has been pushed to far; it is that everyone has been pushed too far.

“King of Devil’s Island” is never as obvious as it could have been. Erling’s past is a prime example. He killed someone. It must have been an infamous affair because at times he seems almost like a modern day media celebrity, people have heard of him. But he never comments on his past, and all that lingers is rumor and innuendo. The same is true of the interactions between the boys. At times “King of Devil’s Island” is subtle, nuance, dare I say delicate, and never devolves into cheap sentimentality or melodrama like it easily could have. I can’t help but think of “Bad Boys” (the Sean Penn “Bad Boys” from the early 1983) as a good comparison.