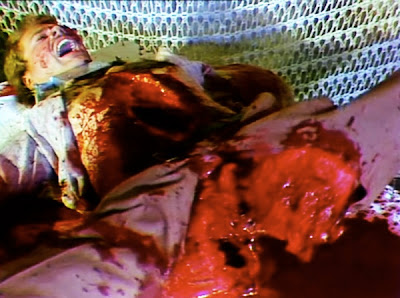 Do you like disemboweling? Do you like people being forced to eat their friend’s eyeballs? I knew you did. And because you have such discerning, gore-soaked taste, you’ll probably want to hurry out and pick up a copy of Olaf Ittenbach’s German blood-fest “The Burning Moon”. Seriously, there’s something horribly, and delightfully wrong with this dude. The film is a bit of a mythic figure, circulating on bootleg VHS tapes traded in seedy back rooms by an underground network of hardcore horror fanatics. At least that’s the way I imagine it going down. Given the cinematic mayhem that is now available on DVD, that would be an appropriately sketchy scenario.


Shot on video, and I mean grainy, crappy, cable-access-looking video, “The Burning Moon” looks terrible. Right out of the gate the acting is, well, lets just say it matches the picture quality. But neither of those things will be horribly off-putting to those of you who picked up this movie in the first place. That isn’t what “The Burning Moon” is all about. What it is all about, however, is blood and guts and violence and splatter and exploding heads, among other horrific things that will make all you gore hounds giggle like little school girls.

Ittenbach himself plays a junkie scumfuck, the type of dude who gets drunk and rolls a smoke in the middle of a job interview. His interests include getting together with a group of like-minded shit-bird friends to drink beer and rumble with a rival gang. He also still lives with his parents and isn’t above taking a swing at his mom on occasion. The shit really hits the fan when his folks force that ultimate insult, that most degrading duty upon him: babysitting. In a decisive “I’ll show you, mom and dad” moment, he proceeds to shoot up and traumatize his little sister with a pair of bedtime tales of terror.

The first story begins in a psych ward, and concerns a murderous escaped mental patient with swoopy bangs and a sweet Euro-pout who goes on a killing spree. It’s a severed head tossing, eyeball ingesting good time, and includes lines like, “I’m a cop and this asshole threw a head at my car.” Hilarious and blood-drenched, this segment, entitled “Julia’s Love” is schlocky, poorly dubbed, and, largely thanks to a spooky, droning score, also manages to be atmospheric as hell.

Story number two in “The Burning Moon”, “The Purity”, involves a country priest who gets all rapey and murdery, though his crimes get pinned on an innocent local farmer. It’s an “Of Mice and Men” sort of thing, where everyone blames things on the simple guy. After a series of Satanic rituals—blood drinking, pentagrams, candles, that kind of stuff—things devolve into a nonsensical, S&M hell. After that there isn’t much in the way of story, but what it lacks in coherence and plot “The Burning Moon” more than makes up for with entrails, faceless corpses, the rising dead, and a bat-shit insane concoction of unnecessary abdominal surgery and amateur dental work. There is an attempt to make use of religious imagery to create ambiance and set the mood, but the close up shots of crucifixes on the wall and similar iconography fail thoroughly in that respect, coming off more goofy than frightening.

The DVD comes with a 47-minute making of feature. There is a ton of footage from the set, which for most films is rather dull, but in this case you get a glimpse of how they staged and filmed some of the gruesome special effects shots. Every now and again Ittenbach pops in to tell a story from production or provide some context. When he talks about his movie he gets this dizzy, maniacal glint in his eye, and you can easily picture him behind the camera clapping his little German hands with demented glee.

Definitely not for everyone, “The Burning Moon” is a must for fans of excessive gore, twisted horror, and blood and guts. I imagine if you own or at least enjoy “Things” this is right up your alley. Though “The Burning Moon” is far better than “Things”, the two live in the same sick world. As questionable and no budget as some elements of the film are, it is not terrible, as an actual movie. It is schlock, exploitation, and calling it a B-movie would be generous, but it is more competent and watchable than you expect it to be. “The Burning Moon” is a dirty, nasty little joint that might just break your brain—a little or a lot depending on your cinematic proclivities. I think we all need to thank the good folks over at Intervision for dropping this little hidden gem on the unsuspecting populace.
Posted by Brent McKnight at 6:04 PM