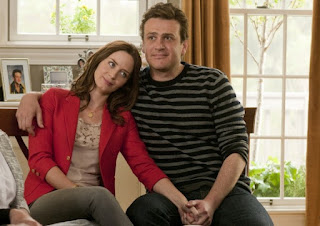 The final 20 or 25 minutes of “The Five-Year Engagement” is great, and finally lives up to the film’s potential. Too bad the first 100 or so (yes, it’s 124 minute long comedy we’re talking about) are a toothless, meandering waste of time. Jason Segel and Nicholas Stoller—the creative team behind “Forgetting Sarah Marshall” and “The Muppets”— are simply going through the motions here, and by the time they finally get around to the good stuff, the kind of charm and humor that makes their other movies engaging and fun, you’ve lost interest and really just want it all to be over. After the end the let down is so much more severe because you’ve seen how good the movie could have been.

Marketing for “The Five-Year Engagement” shamelessly invokes “Bridesmaids”. Both share producer Judd Apatow, and the plots revolve around weddings, but that’s where the similarities end. “Bridesmaids” is irreverent and raunchy. “Engagement” on the other hand is dressed up like a gross-out comedy, but is tepid and bland to the point of boredom. Ultimately the biggest problem with “Engagement” is the same problem that plagues nearly every Apatow produced movie, and most of his directorial work as well. Everything is included in the final product, and I mean everything. Gags run their course, and then some, going on two or three times longer than they should. Bits that serve no purpose are left in, and their presence gets in the way of story and pace. Not only does this make the movie too long, it makes it feel even longer.

In that way, “Engagement” is actually quite similar to “Bridesmaids”, only where that film got away with it, the bits in “Engagement” aren’t that funny. “Engagement” lacks that take-it-to-the-next-level attitude, and the vast majority of the film is mired in generic romantic comedy fluff. It’s not even particularly good as that. Repeated jokes are supposed to differentiate between acts, but they come off monotonous instead, and much of the plot hangs on a psychological experiment about stale donuts that is maddeningly idiotic. It’s so stupid that the moment you hear the idea you think it must be a joke.

The story is simple to the point where the title actually does give everything away. Violet (Emily Blunt), a psychology grad student, and Tom (Segel), a San Francisco sous chef, get engaged. For the next five years (who saw that coming) a wacky series of events, troubles, and misfortunes keep them from actually tying the knot. Blunt is fucking annoying as hell, and Tom is such a repressed man type that he can’t even express the smallest hint of displeasure at moving to Michigan and working in a deli when he could be whipping up world-class cuisine. The film wanders along after the lovers, through good times and bad, until you question if anything will actually ever happen.

The most redeeming part of the first three-quarters of “The Five-Year Engagement” is the supporting cast, the bit players. Chris Pratt (“Parks and Recreation”) stands tallest as Tom’s best friend Alex. He’s a crass, dimwitted womanizer who shows a slide show of all Tom’s exes at the engagement party, talks about “telepathic wiener missiles”, and then knocks up Suzie (Alison Brie, “Community”), Violet’s sister. Brie gets funny in the middle, but it takes a while for her to get going. Rhys Ifans (“The Amazing Spider-Man), Mindy Kaling (“The Office”), Chris Parnell (“Saturday Night Live”), Brian Posehn (“The Sarah Silverman Program), and Kevin Hart (“Think Like A Man”) all pop up and have nice laughs here and there, but those are spread thin between the lot and don’t amount to much.

“The Five-Year Engagement” does have a bit of charm to it, primarily because of Segel’s presence, but neither that, nor some hilarious hunting scenes, is enough. The movie is ultra frustrating because you know that Segel and Stoller can make some magic together. Not only that, but you witness first hand how good this specific film could have been. The end is so freaking good that it almost—repeat almost—saves the entire thing, almost makes it worth sitting through the more than an hour and a half of tedium. If all of “The Five-Year Engagement” was as good as the final act we’d be talking about it as one of the best comedies of the year instead of one of the biggest disappointments.
Posted by Brent McKnight at 2:50 PM