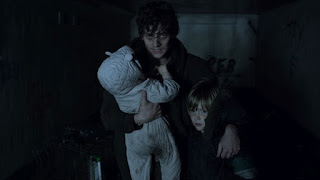 Writer/director Ciaran Foy’s “Citadel” is the creepiest, most affecting horror movie I’ve seen in quite some time. The film draws strength from a variety of sources, leaning heavily on supernatural and religious overtones. The true frights, however, come from the questions at the heart of “Citadel”. Is the source of this terror otherworldly, some “other”? Is it even real, or simply the paranoia of a sick mind? Or, most terrifyingly, is it a symptom of society gone wrong, of the evil lurking within humanity left alone to dwell and evolve into some hideous creature? It is easy to see why this film won the midnight award at SXSW. “Citadel” climbs into you skull and sticks around long after you walk away.

Tommy (Aneurin Barnard) and his pregnant wife are moving out of their apartment in a high rise Irish slum. Think one of the towers from “The Wire”, but even more grizzled. It looks bombed out. On his last trip, he sees a gang of feral teens brutally attack his wife. Trapped in a faulty elevator, all he can do is watch helplessly. The assailants leave her alive, but inject her with something, and though their daughter survives and is perfectly healthy, the wife remains in a mysterious coma. In the intervening months, Tommy develops a severe case of agoraphobia, barely able to leave home for any reason.

Barnard’s performance carries “Citadel” on his spindly shoulders. Everything about him embodies Tommy’s fear, from his harried expression, down to the way he hunches forward, timid and frightened, over his daughter’s stroller. He exists in the pose of a victim. Even the local priest (James Cosmo) picks on him. The camera work only enhances Tommy’s psychosis and illness. When he goes to a run down community hospital for treatment, the therapist puts him through a series of exercises, making him envision unknown assailants stalking him down the street. The frame is tight on Tommy’s face, eyes squeezed shut. As he stumbles around, sweating, quaking, you are right there with him, disoriented, claustrophobic, afraid.

Sinister graffiti covers the impoverished area where Tommy lives. Spray painted warnings of demons and photocopied flyers of missing children plaster the barren walls. At times the landscape looks post-apocalyptic, littered with abandoned buildings and the stripped down husks of cars. Tommy is haunted by specters of the urchins who attacked his wife. He sees them at his door, down the street, and freezes, convinced they’re after his daughter. He’s not even certain if they’re human or not, and you’re not entirely sure that they’re real and not a manifestation of his psychosis. Every element of “Citadel” comes together to create a thorough, weighty tension.

Marie (Wunmi Mosaka), a helpful, sympathetic hospice worker, has the misfortune to befriend Tommy, and tries to show him that his fears are all in his head. In her mind these are kids, misunderstood and neglected urchins. The priest, with his blind child sidekick—that’s not creepy or anything—claims to know the truth, but he may be crazier than Tommy, and has dark secrets of his own. You’re never entirely certain what the truth of the matter is. Are these feral children left to fend for themselves, living in the desiccated remains of a building? Are their intentions misinterpreted or something more sinister. At times they resemble a swarming horde of zombies lurching down deserted streets.

Foy asks these questions and doles out the answers gradually, all the while placing you right there with Tommy every step of the way. You’re trying to figure things out as he does, not certain you want to know. He tries desperately to leave, only to find every avenue blocked. You’re with Tommy, you identify with  him. “Citadel” is grim and bleak, piled high with moodiness, tension, and ominous atmosphere. It really is truly unsettling, and doesn’t dissipate easily. That’s exactly what you want out of a horror movie, and is a testament to the quality of the finished product. If there’s any justice in the world, “Citadel” is going to make even more noise on the horror scene than it already has.

Posted by Brent McKnight at 7:52 PM