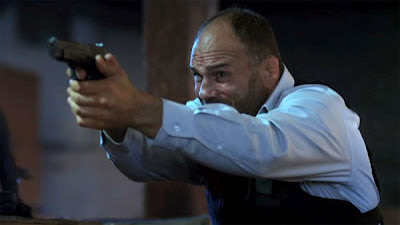 Randy “the Natural” Couture is a great fighter, a legend in the sport of mixed martial arts, but god damn, people need to stop giving him lines in movies. For all his heart in the cage, for all his technical combative prowess, and world-class grappling background, the man is not a good actor. Which is too bad, because he comes across as such a good dude, and he does have an imposing physical presence on the screen. But every time he opens his mouth you have to groan. Maybe he’ll get there, after all, he spent years learning to pummel people better, not necessarily to tap into his internal reservoirs in order to evoke emotions. His role in “The Expendables” is about as much as you can take, and he shouldn’t be saddled with the burden of carrying an entire film. Nowhere is this more evident than in Couture’s unfortunate new action film “Hijacked”.

For a movie that stars a professional fighter, and that has little to sell it aside from the promise of action, the lack of action in “Hijacked” is shocking. The story parallels the 1996 Steven Seagal/Kurt Russell vehicle “Executive Decision”—there are hijackers, a plane, characters with shared histories that are only hinted at—except the pacing is way off. Where “Executive Decision” cuts through the fluff and gets to the point in a timely manner, “Hijacked” hems and haws and meanders around. It takes more than 30 minutes to get to the point “Executive Decision” gets to in around ten: actually in flight, where the bulk of the story takes place.

When you don’t have compelling characters, a forceful narrative, or a particularly interesting story, you need to fall back on what you do have. “Hijacked” squanders this promise of high-octane fun. Paul Ross (Couture) is a special agent, maybe with the CIA, you’re never 100 percent certain on that front. He’s hunting an international crime/terrorism syndicate called “The Tribe”. Though most others in his field don’t believe they exist, “The Tribe” killed Paul’s best friend and bears a cursory responsibility for ending his engagement to Olivia (Tiffany Dupont). Through a contrived series of events, Paul and Olivia find themselves on the same jumbo jet—the plot is also rather similar to “Airplane!”—one that is just about to be taken over by members of “The Tribe”. Whoa, talk about coincidence.

Instead of letting Couture do his thing and kick the crap out of people, “Hijacked” wastes a lot of time trying to conjure up the pain of a breakup, background stories, and well-rounded characters. None of those are strong points. The issues aren’t entirely Couture’s fault, the script doesn’t provide much material to work with. When Ross first lays eyes on a bomb, he flatly mutters, “Geez, we got big troubles.”

Don’t worry about staging an action flick in a confined space, the plane, which belongs to a shady billionaire Bruce Lieb (Craig Fairbrass), is massive. We’re talking the size of a cruise ship here. A 747 is a large vehicle, to be sure, but this specific one happens to be a sprawling network of hallways, staterooms, storerooms, bars, lounges, and, of course, a secure panic room furnished like a luxury suite. As characters jog around the plane—the whole time blasting off haphazard rounds inside a pressurized metal container 35,000 feet above the ground without a care in the world—you can only wonder, exactly how big is this airborne monstrosity?

Outside of the acting issues and script problems, the mechanics of “Hijacked” don’t do the film any favors. Nothing makes a crowd scene feel empty like never showing the crowd. When Lieb is besieged by what is supposed to be a throng of reporters on the way to his car, every shot is so close you can only see the same two or three people. An early scene at a fancy gala has the same problem. You know that there are supposed to be hundreds of people, but you never see them, and the characters feel all alone in an empty room. Big scenes are difficult to pull off, they’re expensive and present logistical problems, but if you must have them, handle your business.

All of the fight scenes have similar issues. Instead of pulling back some and letting you see the characters throw down, each shot holds tight, and you see maybe from the mid chest to the top of their head. You don’t much the actual fighting, and every blow seemingly gets a cut. With no rhythm to the editing, the end result is a disorderly mess that’s cobbled together, quick, and cheap.

That statement goes for the entire film as well, not just the fight sequences. Watching “Hijacked” my girlfriend came into the room, saw 30 seconds, and said, “This is a bad movie.” My response was, “It’s not good.” In retrospect, this shouldn’t have been a surprise. There are warning signs, like the Blu-ray box. “Hijacked” comes without a single bonus feature. Absolutely nothing. There’s not even a trailer for the film. The menu has two options: “play movie” and “scene selection”. When you take that into consideration, it doesn’t look like Anchor Bay has particularly high hopes for “Hijacked”. Even the tagline, “Flying has never been so dangerous,” is lazy.

Posted by Brent McKnight at 3:10 PM