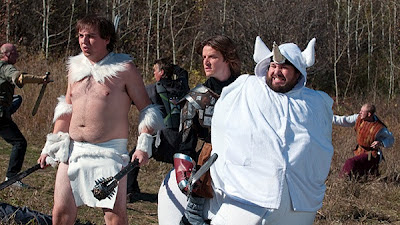 It’s about damn time that LARPers get their day in the sun. Their pasty skin could use some rays. For those of you unfamiliar with the term, LARPing stands for Live Action Role Playing. Think “Dungeons & Dragons”, but instead of gathering in a dank, dark basement, the players take to parks and other public spaces in order to whack each other about the head and torso with foam swords, and to throw tinfoil balls at each other in lieu of lightning bolts and spells. This is the world explored by “Lloyd the Conqueror”.

The LARPing realm, once a bastion of fun, friendship, and teamwork, has fallen under a long dark shadow. Derek the Unholy (Mike Smith, Bubbles from “Trailer Park Boys”) has launched a dark crusade, spreading fear, treachery, and you know, general badness across the land. He’s such a dickweed that no one wants to play anymore. In order to ensure that there are enough teams to stage a LARPing championship for him to win, Derek—a community college literature professor—coerces three slacker students into joining the league for a passing grade.

However, his own hubris may lead to his undoing. Lloyd (Evan Williams), Patrick (Jesse Reid), and Oswald (Scott Patey) are about to fail Derek’s class and lose their financial aid. In order to save their scholastic hides, they have to best Derek’s evil “Hordes of Chaos”. To complete their epic task, they enlist the help of hot Tae Kwon Do instructor, Cassandra (Tegan Moss), and the legendary White Wizard, AKA Andy (Brian Posehn).

Epic nerd fight montages, “virgins painted green”, and great lines like, “for the love of Odin’s sack”, and “I’m a level 80 wizard, I don’t have to do anything”, combine to create one hell of an entertaining movie. The costumes are awesomely shitty, like they are in real life—some players put hours and hours into carefully crafted outfits, while others just cobble something together out of whatever is close. And there’s always one guy who takes thing too serious, and goes too far in the battles.

It’s great to see this ultra-niche subculture explored. Derek lords over his realm like a tyrannical despot, and it consumes the entire lives of others. For some, LARPing is all that really matters in life. But when they come into contact with outsiders, who have no idea what the hell they’re talking about, they seem weird and awkward. Those moments are hilarious. Lloyd and crew start out as nonbelievers, but become entrenched in the LARP over the course of the film, which itself is structured like a fantasy quest, where newcomers much brave great peril in order to free the land from oppression and cruelty.

A little long at times—the action drags some in the middle as Lloyd chases Cassandra, the team comes to terms with how nerdy they truly are, and the world of LARPing is explained in great detail—this is still a lot of damn fun. The heroic trio of Lloyd, Patrick, and Oswald, have great chemistry. Lloyd is a screw up with aims of being something more, while Patrick and Oswald are perfectly content to do as little as humanly possible to coast through their community-college-centric life. Though with little to no prompting, Lloyd slides onto the couch next to his buddies for a videogame marathon instead of working on a presentation that would have helped them avoid their predicament.

“Lloyd the Conqueror” is cheap, juvenile, cheesy, and utterly ridiculous, in all the best possible ways. The film played at this year’s Maelstrom International Fantastic Film Festival, and if you’re fans of other Canadian comedies like “Fubar” and “Trailer Park Boys”, then “Lloyd” is something right up your alley.
Posted by Brent McKnight at 5:53 PM