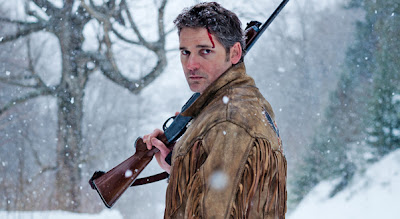 On the surface, Stefan Ruzowitzky’s crime-thriller “Deadfall” has a huge upside. When brother-sister robbers Addison (Eric Bana) and Liza (Olivia Wilde) knock over a casino—Liza’s first big score—and make a clean getaway, things look good. On their way to the Canadian border things take a turn for the worse and problems arise, for the characters and the film. When they hit a deer and wander into the wilderness, a harsh Michigan blizzard forces them to separate and fend for themselves in the bleak, windswept tundra.

Bana is fully badass, while Wilde turns in a decent, if uneven performance. Addison is a hardened murderer, running on instinct, and detached enough to kill at the slightest urging. The script, however, bounces Liza back and forth between cunning seductress, and pure-as-snow angel, and the pair cuts a vague silhouette of incestuous siblings. A supporting cast that includes Kris Kristofferson, Charlie Hunnam, and a quietly brilliant Sissy Spacek—strong and tough and calm—only adds to what should be a better movie. The bleak, raw landscape is a great setting for a hard-boiled crime tale full of desolate characters wandering on intersecting paths.

“Deadfall” has the potential to be something truly tremendous. It falters, however, with a string of completely undeveloped subplots and side stories. Kate Mara plays Hanna, a small town deputy. Just accepted to the FBI academy, her father (Treat Williams), the sheriff, doesn’t think she’s a capable officer because she’s a woman and he’s a dick, and belittles her at every turn. That set up is rich territory for family drama, and for Hanna to prove what she can do. Only nothing ever happens in this aside.

Jay (Hunnam) is a former Olympic boxer. Just out of prison for his involvement in fight fixing, he has a lot to contend with. There’s a troubled relationship with his father and former coach (Kristofferson), his own shame at what his life and career could have been, and he’s on the run because he accidentally killed the guy he threw the fight for. This last bit may or may not have happened, and, like everything else, none of this ever amounts to much.

Everything in “Deadfall” happens on the surface. Looking at it purely from a plot perspective, it could, and probably should be a really good time. There are secrets, lies, murder, shadow-filled histories, and a ton of other things that often serve to enhance a gritty criminal saga. But it falls so flat, and fails to deliver so often, that by the end it just isn’t interesting at all. For every kickass snowmobile chase through the woods, there’s a contrived moment, like when Jay just happens to be wearing his silver medal from the Beijing Olympics while telling Liza about it at a bar.

A forced love story between Liza and Jay weighs down the story and the pace. So unlikely, this connection happens instantly and without anything real or authentic to drive it, and you think that she must be playing him, using Jay for a ride and a place to hideout. After a while you realize that she’s serious, that she’s falling for this guy she just met—Jay introduces her to his parents at Thanksgiving (really) after less than 24 hours (he did just get out of prison)—and you’re taken aback. It makes them both come across as stupid and naïve. The intended emotion is unearned, awkward, and uncomfortable.

Although it isn’t a terrible movie, mediocre and disappointment are the words that keep springing to mind when looking to describe “Deadfall”. Wasted potential is another apt portrayal. It could have been so much better, especially considering Ruzowitzky’s 2007 war film, “The Counterfeiters”, won the Oscar for best foreign language feature. “Deadfall”, his first English language picture, pales in comparison, and while it looks slick and professional on the most superficial layers, it is not something that you need to watch.
Posted by Brent McKnight at 9:21 PM