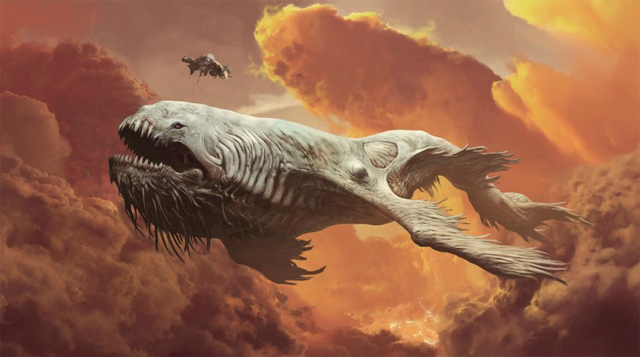 A while back, a proof of concept video for Ruairi Robinson’s (The Last Days on Mars) incredible looking sci-fi Leviathan made the rounds. All you could do was gape at awesome looking flying beast monsters and wish with every fiber of your being that this was a real movie. And now it’s going to be, and it’s bringing a couple of big Hollywood names along for the ride.

The story takes place in the 22nd century. Mankind has been able to colonize many new worlds thanks to faster-than-light travel fueled by the eggs of the largest creatures humans have ever encountered, the aforementioned flying creatures. As you can imagine, harvesting these eggs is no easy task, and those tasked with his job are mostly draftees, conscripts, and involuntary labor. That last part sounds right up Blomkamp’s alley.

There aren’t a ton of additional details about this, but you can bet your ass we’ll be keeping both our eyes and one of yours on this. And if you haven’t yet, check out the Leviathan proof of concept video below, it’s the best three-and-a-half-minute sci-fi movie you’ll see all day.

Posted by Brent McKnight at 3:24 PM