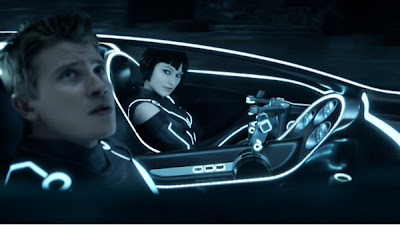 “Tron: Legacy”, Joseph Kosinski’s sequel to the 1982 cult fave “Tron”, starts out promisingly enough. Okay, that’s not entirely true, it starts out idiotic, but idiotic in a way you can cope with. Sam Flynn (Garett Hedlund) is an orphan. His father, cyber-visionary/digital freedom fighter Kevin Flynn (Jeff Bridges), disappeared in 1989 immediately after telling his young son about a “miracle” he experienced. In 2010, the elder Flynn’s videogame company, Encom, has transformed into a global technology juggernaut. While Sam has controlling interest in Encom, he prefers to the board of directors run the company, choosing instead to live the life of a bored, motorcycle riding twenty-something that has never worked a day in his life. And he plays yearly pranks his own company, like putting their new operating system on the internet for free, then base jumping off of the Encom Tower.


Through a series of improbable events, and entirely unexplained technology, Sam finds himself sucked into “The Grid”, a three-dimensional world that exists inside a computer, or a chip, or maybe just the “Tron” videogame at ye olde family arcade. In “The Grid” programs take human form, and Sam has to fight for his life against guys in helmets and tight black suits with neon piping, while a bass heavy score by Daft Punk rumbles around.

Sam discovers that the overlord of this world is a guy named CLU, a program his father created in his own image, and charged with building the perfect system. Only CLU has been corrupted, and rules like a fascist dictator, putting on gladiatorial games to appease the masses. Just in time, Quorra (Olivia Wilde), a badass rogue warrior program, or something like that, rescues Sam from this high-tech Thunderdome.

Up until this point “Tron: Legacy” is stupid, but in a flashy, entertaining way. There are some decent chase scenes, ample action, and the world of “The Grid”, especially the light cycle sequence, looks pretty awesome. The whole thing is set up like an epic scale videogame, which is exactly what you want it look like. Pace wise the story moves fast enough that you can ignore all of the gaping plot holes and dumb shit, and just gawk at the eye candy. In reality the best parts are little more than updated elements from the original “Tron”, but it is fun to watch.

After Quorra rescues Sam, however, the movie takes a giant crap. Quorra takes Sam to his father, who lives “off the grid”, which basically means out in the wilderness where you need something like a cyber Jeep to get to. Bridges plays Kevin like a watered-down version of The Dude from “The Big Lebowski”. He’s a Zen programmer who meditates, reads philosophy, and says things like, “Dogs are cool, man”. His shtick gets old real quick.

All of the action stops for what feels like an hour, and the movie becomes a series of awkward flashbacks as the script attempts to explain everything that happened in the two decades since Kevin disappeared, and half-hearted emotion between Kevin and Sam. It’s tedious, and kills any momentum there was. Without all of the bells and whistles to prop up the weak ass story, you realize how paper-thin it really is, and “Tron: Legacy” begins a sharp downward spiral that lasts for the rest of the film. What plot there was grinds to a screeching halt, and you get bored for a while. By the time things actually start to happen again, you’re too disinterested to care. And what does happen involves Michael Sheen doing what amounts to an obnoxious, over the top David Bowie impression. In a stupid movie full of stupid shit, this is by far the stupidest.

The overall effect is something like a science fiction soap opera where you’re never quite sure what is at stake. CLU plans to lead some sort of army from “The Grid” into the real world, and apparently that will be bad, but it’s unclear how, or why, or what it will actually entail. “Tron: Legacy” is full of vain attempts to make some obscure point about striving for perfection at the cost destroying the perfect things that are right in front of you, and selflessness and sacrifice. It really, really wants to mean something, anything, but ultimately it has nothing to say.

You can forgive a movie with no story if there are at least characters to latch on to, but there aren’t any of those either. There is no emotional core whatsoever. Sure, Olivia Wilde is nice to look at, but outside of that, don’t expect to care much about anyone since the characters are as empty as the rest of the movie. The only consequential decision Sam makes is to go looking for his father, and then winds up getting sucked into cyber space, which doesn’t seem to surprise him at all. In fact, he takes all of the crazy stuff that happens to him in stride, and accepts things like doing gladiatorial battle in a digital arena as a matter of course. Maybe the life of young Sam Flynn is just so exciting that this is on par with an average Tuesday night. When he tries to explain to Kevin what the world is like now, it is painful. And CLU (as well as the young version of Jeff Bridges that appears in the first scene) is a plasticine, stone-faced CGI representation of, well, a young Jeff Bridges. He looks like a cutting room floor leftover from “The Polar Express”.

If “Tron: Legacy” was 40 shorter it would still be stupid and pointless, but it would at least be pretty to look at. But alas, the damn thing clocks in at an unnecessarily long two plus hours. There are a few laugh-out-loud moments, but the laughs aren’t intentional. Whenever Kevin says pretty much anything get ready to chuckle. After the first half of the movie, “Tron: Legacy” is dull, to the point of being excruciating. There is one tent pole action sequence later in the movie, but you’ve already scene it, and scene it done better, in “Star Wars”.

Maybe, just maybe, if you can get past the glaring story problems and bland characters, and don’t ask too many questions (like how the hell do these people get sucked into “The Grid”? Where do their bodies go? At least “The Matrix” deals with that.), then you might be able to enjoy “Tron: Legacy”, but don’t count on it. Which is too bad, because the movie started out looking like it might be dumb, but at least entertaining, and wound up completely vanilla and toothless instead. The word disappointment springs readily to mind.
Posted by Brent McKnight at 10:18 AM

Tron Legacy nice movie in 2010. Nice information your share. I really to reading your post.thanks sharing