'Season of the Witch' Movie Review 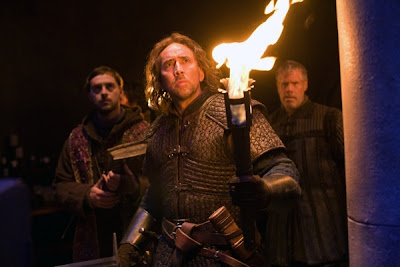 “Season of the Witch” has been a long time coming. The film has been in some stage of production in one form or another since 2000 when Bragi F. Schut first wrote the script. Originally scheduled for a March 2010 release, then again in October 2010, “Season of the Witch” finally hits theaters at the tail end of the first week of 2011. And goddamn if it wasn’t worth the wait. In reality “Season of the Witch” isn’t all that good, but it’s not all that good in the most entertaining way possible. Completely mis-marketed as an epic, 14th century adventure, this is one of the funniest, most ridiculous movies to come out in a long time. There are times when “Season” borders on slapstick, and even more moments when you fully expect the entire cast of “Monty Python” poke their heads around a corner.


Behmen (Nicolas Cage) and his old-timey bro Felson (Ron Perlman) are knights of the Crusades, which means most of what they do entails killing lots of people. In fact, after quick prologue where some witches are strung up, the movie gives you a sweet montage of epic, slow-motion battles. Not a bad way to begin a movie. After growing tired of the hypocrisy of the church, which compels them to kill innocent people in the name of god, the two knights desert their holy quest. The old friends walk the earth, only to find a land ravaged by a mysterious plague that leaves victims looking more silly than frightening. Less than a month later, Behmen and Felson are discovered, arrested, and forced to help transport an accused witch (Claire Foy) to a monastery for trial. A priest (Stephen Campbell Moore), a knight (Ulrich Thomsen), and a petty thief named Hagamar the Swindler (Stephen Graham) accompany them on their journey. The whole set up sounds like the beginning of a joke. Their crew also has a young hanger on, Kay (Robert Sheehan), who looks like a cross between James Franco and the guy who played Warren in “Empire Records”, only with scraggly, pubescent facial hair.

“Season of the Witch” fails miserably as a serious adventure film. It’s like a SyFy movie, where nothing quite looks real. The dirtiness and grime are never dirty, nor grimy enough to appear authentic. Think about a western where everyone has perfect teeth, or a post-apocalyptic movie where all the men are clean-shaven, and you’re on the right track. However, a few minutes in, you realize that’s not the movie they were trying to make. The cast, especially Perlman, is having a blast. He plays the entire film with a wink and a smirk, and delivers a constant stream of one-liners. And we’re talking Schwarzenegger in “Commando” or “Predator” one-liners. When Behmen remarks that they haven’t seen a soul all day, Felson replies, “Keep your souls, let me find a chicken.” Cage bug-eyes his way through the entire film, almost daring you to take it seriously. Everyone is well aware of how absurd this is, and instead of fighting it, the entire cast dives in headfirst and wallows in it’s own crapulence, which makes the film all the more delightful.

The pace bogs down for a bit in the middle, where the story attempts to get dire and grave, but fortunately, you are never far removed from a fight scene, Ron Perlman cracking wise, or the story becoming so overly serious that the only rational response is to raucous laughter. By the time you get to the climax, “Season of the Witch” has fully descended into madness. Without spoiling things, just know that this includes winged demons, zombie monks, and back-to-back “Jaws” and “Ghostbusters” references. You can almost tell the exact moment where they gave up trying to be serious and decided to get rad instead.

Somehow “Season of the Witch” survives a mediocre premise, poorly executed CGI, and questionable acting. Watching it will require some giant leaps of faith, and drinking a little bit during a viewing will only enhance the experience, but it is way more fun than you ever expected it to be. It’s cheesy and dumb, but it’s also bat-shit crazy and really entertaining. If you want to be amused for 90 minutes, watch “Season of the Witch”, you’ll come out of the experience laughing and loving Ron Perlman more than you already should.
Posted by Brent McKnight at 10:58 AM

We witness how one man’s courage will decide the fate of mankind. Who to trust? Find out which one of your friends is the most trustworthy and which one is the least trustworthy on this dangerous Season of the Witch adventure!

I struggled to watch this movie till the end, believing this Hungarian artistic endeavor would produce some unique surprises
that justified it's overlong length. No such luck. Scroll through the never-ending credits and mentally compute , for all the CGI graphics, foreign location, food, transport, salaries, etc. what this film cost. My guess; 3 times the cost of Lawrence of Arabia in today's dollars. PROFLIGATE is the only way to describe.