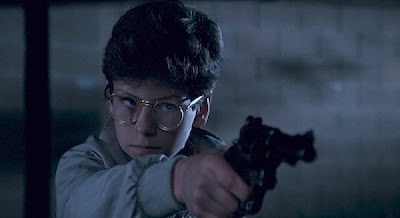 Severin Films kicks this summer season off right, releasing a trio of obscure, little-seen horror films from the 1970s and early 80s, or as I like to call them, three more reasons not to go out in the sun. We get two entries into the slasher movie sweepstakes, “Bloody Birthday” and “Nightmares”, and one, what-the-hell-is-wrong-with-people flick, “The Baby”.

Sure, when you peek out through your blinds like the paranoid, creepy horror fan that you are, the sun is shining, and you may think to yourself, I should be out there, socializing and soaking up some rays. But don’t give in to thoughts like that. Find these films, lock yourself away, and tent your fingers maniacally as you wile away your day. There will be other sunny afternoons, why waste an opportunity to watch some newly available genre gems.

Ten years ago three babies, two boys and a girl, were born at the height of a total eclipse. If that’s not an ominous sign, I don’t know what is. Now, on the even of their tenth birthday, these soulless little brats go on a killing spree to rival those in most grown-up slasher fare. There are strangulations, stabbings, shootings, poisonings, and even an attempted vehicular homicide in a junkyard. “Bloody Birthday” isn’t a normal ‘creepy kids’ horror movie, where the murderous children are pasty, blank-faced little shits who speak in a spooky monotone. No, this trio of pint-sized psychopaths plots out their crimes, taking the time to set the stage, dispose of evidence, and cover their tracks. They go about their business with a sociopathic glee.

“Bloody Birthday” has all the faults you would expect from a low-budget horror film from 1981, but it is also a lot of fun, and is worth checking out for genre fans. There is an inventiveness to the film that makes it stand apart somewhat. For one, the heroine and her little brother have to use astrology to save the day, so that’s fun, and, once again, horror cinema drives home the point that nothing good will come of cemetery sex, especially if you have sex in an actual grave. I know you don’t want anyone to see you, but seriously, who has sex in a grave? Look carefully and you’ll see some familiar faces, like a young Michael Dudikoff of “American Ninja” fame, Joe Penny from “Jake and the Fatman”, and if you ever wanted to see a perky Julie Brown dance around topless for no apparent reason, this is your movie.

The high point of the bonus features is a 15-minute documentary that explores the history of slasher films, from the predecessors like “Psycho” and the films of Herschel Gordon Lewis, through the Italian giallos, and into the heyday of franchises like “Friday the 13th”. But the rest of the extras are worth checking out, too, including a fun recent interview with star Lori Lethin, who fondly recalls her days as a scream queen in cookie cutter horror films that were shot on a shoestring budget over the course of a few short weeks. A 51-minute audio interview with director Ed Hunt rounds out what is overall a solid release.

Aussie sleaze fest “Nightmares” AKA “Stagefright”, available here uncut and uncensored for the first time outside of its native land, is a twisted concoction of sex and blood in the giallo vein of things. A definite Argento knock-off, “Nightmares” starts off with a young girl, Helen, walking in on her parents knocking those sweet, sweet boots. A month later Helen tries to stop her mom and another dude from making out while driving in the rain. Like cemetery sex, we all know it’s not safe to grope and drive, that’s even deadlier than texting behind the wheel. They crash, mom and guy are killed when they launch through the window, and the next time we see Helen, now played by Jenny Neumann, she is an adult actress. That’s poor phrasing that makes her sound like a porn star. How’s this, Helen has grown up, and become an actress—much better—but an actress tortured by her past. She falls for her on-stage co-star, but as the anniversary of her early-in-life tragedy approaches, she becomes increasingly unstable. She’s fine one moment, but the very next she gets all slashy, and cuts up a naked lady’s boob with a shard of glass. To be fair, she also slices and dices her fair share of guys.

“Nightmares” is framed as a murder mystery marinated in sex and blood, but there’s never any real mystery to the proceedings. You never have a second thought that the unseen killer—director John Lamond uses the slasher-movie staple POV shot—is actually Helen, and as you near the end you start to fear a oncoming, ill-advised twist. And no one seems to care that lots of people keep getting killed. None of the actors notice that their numbers keep dwindling, and the police show up for one brief scene, but other than that, “Nightmares” is one murder after another with little else. Of course that plot has some merit, but in the end, coupled with the nonsensical plot, terrible acting, and questionable, at best, motivations, murder can only carry the film so far.

Lamond, most known as a producer of soft-core pornography, has no illusions about the quality of his venture into slasher films. The commentary track with Lamond and Mark Hartley, director of the documentary “Not Quite Hollywood: The Wild, Untold Story of Ozploitation!”, have an engaging discussion that not only covers the final film and the production, but also the Australian film industry as a whole. When Lamond, quite old by this point, starts to falter or go off point, Hartley is there to rein things in and steer the conversation. The result is a nice back and forth that is entertaining and informative. The special features are filled out by a the same “A Brief History of Slasher Films” featurette as “Bloody Birthday”, and a reel of trailers for Lamond’s other films, which are exclusively light-hearted, comedic soft-core pictures full of buxom young topless women in exotic locations like Hong Kong and French Polynesia.

All in all, “Nightmares” is one for the more hardcore genre fanatic.

Where to start with “The Baby”? “The Baby” is a bizarre exploration of violence in suburbia, sexual obsession, and depravation. Fucked up is probably the best description. Ann Gentry (Anjanette Comer) is an earnest social worker assigned to the Wadsworth family, which has four members. There is Mrs. Wadsworth (Ruth Roman, “Strangers on a Train”); her daughters, the sultry Germaine (Marianna Hill, “High Plains Drifter”), and the pigtail-wearing Alba (Susanne Zenor, “The Way We Were”); and, of course, Baby (David Manzy), a full-grown, mentally disabled man who never progressed beyond infancy. He sleeps in a crib, wears a diaper, and wants to suckle his mama’s teat.

Ann quickly develops a pronounced interest in Baby and his family. They are similar characters in some regards, both trapped in time, stranded in the past, unable to progress past a specific point in their lives. Ann’s husband was in a horrible accident that incapacitated him, and she lives with his mother; and Baby, well, despite signs that suggest he could mature and advance, his family keeps him static through a combination of punishments. There’s a particularly interesting scene where Alba disciplines Baby with a cattle prod.

Then things get weird. “The Baby” is a twisted, bizarre spectacle that is fascinates and repels at the same time. You really do have to see this one to fully understand just how warped and perverse this film is. Not so much of a horror film, “The Baby” is freak show set in the swinging 70s, one that doesn’t entirely fit into any specific genre except incredibly damn strange.

Out of the three of these new DVDs “The Baby” comes with the weakest package, only a pair of audio interviews to speak of. Listening to director Ted Post—known for helming “Magnum Force”, “Hang ‘Em High”, and “Beneath the Planet of the Apes”—you sense his initial reluctance to tackle a film like “The Baby”. He knew writer Abe Polsky, but he can’t recall how, or why. Baby himself, David Mooney (formerly David Manzy), fills the second slot with his reminiscences. Though these interviews are interesting for a while, they are hard to watch without any visuals to back them up, and begin to drag.
Posted by Brent McKnight at 9:27 PM