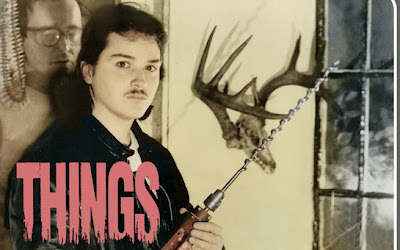 “Things” is in fact many things. First off it is the 1989 horror collaboration by mulleted Canadian buddies Barry J. Gillis and Andrew Jordan. It is also schlocky, frustrating, haphazard, and strange beyond belief. Shot on Super 8 and dubbed afterwards, “Things” is grainy to watch, muddy to listen to—when the sound doesn’t cut out completely—and feels like “Beavis and Butthead” are responsible for most of the dialogue. At times you actually expect the voices to start making fun of the movie. The score, from everyone’s favorite super group Stryk-9, doesn’t just sound like it was made on a cheap Casio keyboard, it actually was. Watching “Things”, you’re never 100 percent sure what’s going on, characters die or have body parts hacked off, only to reappear later alive and/or fully intact.

The narrative moves forward at a snail’s pace, and while Gillis and Jordan have an obvious love of the genre, name dropping or referencing “Evil Dead”, “Texas Chainsaw Massacre”, “The Last House on the Left”, and more, they have an almost complete disregard for plot, story telling, and the basics of filmmaking. In one of the extras on the new DVD, an interviewee remarks that “Things” obliterates the language of film. But, honestly, that’s what you should expect from a movie that starts out with a naked woman wearing a devil mask in a dimly lit basement. You should anticipate that a movie like this will spend five minutes exploring a bathroom, a small bathroom, with a flashlight, instead of trying to advance the plot, develop characters, or do much of anything. This is the kind of movie where it is okay to dump whiskey on your crying friend.

The story of “Things” follows two pals, Don (Gillis) and Fred (Bruce Roach), who go visit a third friend, Doug (Doug Bunston), at a cabin in the woods. In a refrigerator they find a tape recorder that says some demonic sounding words. They proceed to drink all of the beer and put dead roaches in each other’s sandwiches. There are some cut scenes of television reporter (porn star Amber Lynn), who is apparently broadcasting from the future, and knows exactly what is going on inside the cabin; and some scenes of what could be torture, or could be a mad scientist doing mad scientisty types of things—there are lots of severed heads and plucked out eyeballs. “Things” is a more than a little bit vague.

Eventually Doug’s pregnant wife, Susan (Patricia Sadler), is ripped open from the inside by an insidious little beasty that looks like an overgrown ant had a baby with “Alien”. “Things” then becomes a tale, albeit a very slow, tangential tale, about the three friends trying to stay alive as these creatures, which multiply somehow, gradually take over the cabin.

“Things” is not an easy movie to watch. Not because of the gore, though there is a great deal of that, but because it is random, chaotic fiasco. It is a jumbled mass of nonsensical behaviors, lighting that changes shot to shot, and hesitant attempts to be shocking. Alternately fun, painful, bizarre, and simply puzzling, “Things” may be worth a cursory glance for the hardcore horror fan, though it is ideally watched under the influence of some illicit substance, anything will do really, and with a room full of similarly impaired, like-minded friends. Watching it alone, sober, in the middle of the day, is a little to depressing for words.

The DVD arrives with a stacked collection of extras, and the best of the bunch are the “Testimonials”. People like Jason Eisener and Rob Cotterill (“Hobo With A Shotgun”), Paul Corupe of canuxploitation.com, and the guys from Bleeding Skull; all chime in with their thoughts on “Things”. More than just the usual praise in segments like this, these folks basically use this forum as a place to work out their own, often ambivalent, feelings about the movies. None of them are super gung-ho, you-have-to-see-this-movie. It’s more restrained, curious fascination with an artifact from another world. When Gillis ambushes Tobe Hooper, all but forcing the director to sit down and watch the trailer for “Things”, Hooper has a similar reaction, awkward curiosity for this unexpected oddity in front of him.

Some of the extras are almost as bizarre as the film itself, like the “Things” 20th anniversary cast and crew reunion, which is moderated by a man with puppet. An audio viewing party with the Cinefamily is one guy who has seen “Things” chuckling to himself while three others, who have never witnessed the phenomenon, attempt to understand and unravel what is happening on screen. The commentary track with Gillis and Jordan should have been a lot of fun, but is completely ruined by the presence of a shrill, obnoxious woman, whose presence is never explained or justified. All she does is tell Gillis and Jordan how much their movie sucks, get combative over every point, and randomly yell for no apparent reason. No joke, her voice upset both of my dogs and they left the room.

Rounding out the bonus features are some behind-the-scenes clips of Lynn, who Gillis remarks that they couldn’t pay enough to get naked in their movie, and an archived collection of TV appearances from Gillis. Watching him and his pencil-thin mustache squirm is more fun than anything that happens in the actual film. All in all, it is a nice package for an awful, though strangely intriguing movie.
Posted by Brent McKnight at 10:15 PM