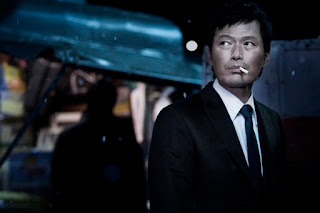 Tae Gun-ho (Jeong Jae-yeong) is a badass in the classic tough guy vein. Watching him in South Korean director Huh Jong-ho’s thriller “Countdown”, you can’t help but be reminded of guys like Steve McQueen or Jack Lord. He wears straight, simple suits, doesn’t say much, and doesn’t get traditionally angry, but he’ll take you down regardless. And the man can certainly fight with a high-powered tazer.

The very first scene in “Countdown” gives you good idea of Tae’s personality. He works for a collection agency, he’s their best man; in fact he’s the only competent agent they have. Capable of getting any debt from anyone, he stops at nothing. A man whose car Tae is repossessing douses himself in diesel fuel, but doesn’t have a source of fire. Tae nonchalantly lights a cigarette and offers the man his own lighter, saying he better shit or get off the pot. That’s tough.

After the initial exposition, the getting to know you moments with Tae, he learns that he has liver cancer, fast acting and terminal unless he can find a donor. There is one perfect match, Cha Ha-yeon (Jeon Do-yeon), who received a heart transplant from Tae’s dead son. Like Tae, Cha is also a bit of a throwback to an earlier era, with her mod haircut and style, and her cavalier attitude. Cha is also something of con artist, a grifter always playing some angle. She’s also in prison, and being hunted by the Chinese mob, who she conned out of a ton of cash. Not only does Tae have to convince this swindle artist to give up part of her liver, he also has to keep her alive until the surgery, no easy task.

“Countdown” is really a tale of two halves. The first portion of the film plays like a classic caper. Despite the life or death seriousness of the situation, for both Tae and Cha, there is a light bounce to the pace and tone. Cha tries to reclaim some money stolen from her, Tae tries to keep tabs on Cha, and prevent her from falling into the clutches of the mob. You’re constantly running here and there, in the thick of scams, cons, and plays.

There is a fun playfulness to the proceedings that contrasts nicely with the gravity of their respective predicaments. A deadpan gallows humor permeates things, like when Tae quits his job and asks his boss if he can punch him in the face, and there are a collection of solid fights and chase scenes. The plot twists and turns and Huh balances all of the threads, making sure each receives the proper amount of emphasis. Nothing feels short changed, and the breezy feel whips you right along.

Then things change. The brisk, almost cheerful tone evaporates, and things take a much darker tack. Before you knew lives were on the line, but now the consequences are much more dire and concrete. Secrets hidden down deep, pushed to the furthest recesses bubble up to the surface, bringing hurt, pain, and trauma with them.

This is not necessarily a bad move, but it is definitely a drastic shift in mood. At times this latter portion teeters precariously on the verge of melodrama, especially in regards to Tae’s son. I do have to admit that I was less engaged in the latter portion of “Countdown”. While this section would be fine in any other movie, it doesn’t live up to the first portion, which is pretty fucking great. “Countdown” may not in the same league as recent South Korean thrillers, due to the uneven contrast between halves. But it is still a damn fine time.

Posted by Brent McKnight at 2:37 PM