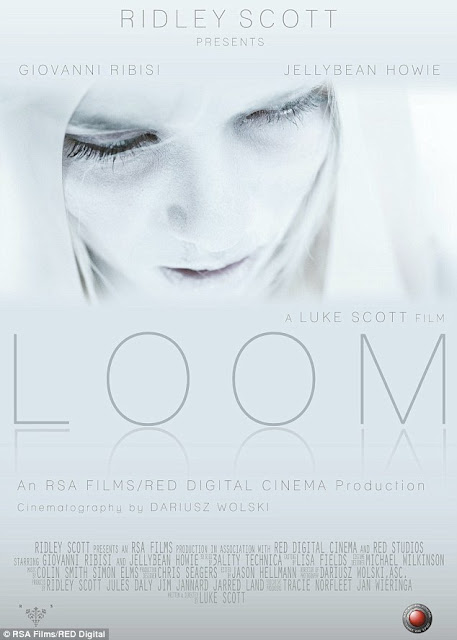 An established commercial director in his own right, Luke Scott is stepping into the realm long-roamed by his famous father, Ridley Scott. That realm happens to be science fiction film, and from the look and feel of his short genre thriller, Loom, Luke has inherited a certain aesthetic sensibility and acumen from dear old dad.

Loom is garnering a number of comparisons to the elder Scott’s iconic 1982 film Blade Runner, and to be sure there are certain visual and thematic similarities. Both films take place in a moody, dystopian future, and the look and feel of the places share specific traits. To be fair this is due more to working in this genre than to any genetic or familial connection. In the decades since Blade Runner it is rare to come across a sci-fi film that doesn’t bear some of these trademarks. There are also obvious nods to Stanley Kubrick’s 2001: A Space Odyssey, no shared DNA required.

Loom lacks the scope, the wider angles, of bigger films like Blade Runner, and is more focused in on a specific story and character, rather than a larger world. Giovanni Ribisi (Avatar) plays Tommy, a low-level geneticist and science weirdo who helps grow meat in a lab in order to feed an overpopulated world. Tommy, however, also has plans of his own, plans that involve a secret, highly illegal at-home project. There are hints that, despite his low standing, he is particularly gifted in his chosen field, as if it is a conscious decision that he is where he is. As the narrative progresses, Tommy’s aims come into gradual focus.

Loom was shot entirely on a prototype RED camera, and was conceived as an exercise to push the boundaries of exposure and color range, with an eye on capturing the delicate detail often lost in darker scenes. Cinematographer Dariusz Wolski (Prometheus) uses this technology to great effect. Filmed almost entirely in small, tight spaces—like an apartment, lab, or bus—the short never feels limited or constricted. Exquisitely framed scenes contrast light and dark, highlight colors, and combine into a beautiful 20-minute piece.

In typical short fashion, and in typical form for speculative fiction in general, Loom poses more questions than it answers. You feel like you’re getting a glimpse into a story that has gone through many cycles already, and that will continue to go through many more in the future, as Tommy creeps nearer and nearer his ultimate goal.