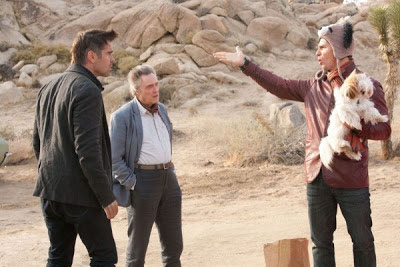 Writer/director Martin McDonagh’s new film, “Seven Psychopaths”, has everything a dude wants out of a movie. It’s awash in violence, booze, laughter, dog thievery, and the titular madmen. Emphasis on the men. At one point, the protagonist, Marty (Colin Farell), a busted Irish screenwriter, is accused of only writing female characters so they can be killed off later. That charge has been leveled at McDonagh a time or two. We’re talking a testosterone-fueled, pseudo-road movie with a story that’s smart, quick-witted, and self-referential. Pulling off stories within stories, films within the film, the narrative is an endlessly inventive, looping spiral of dark humor, blood, and earnest emotion.

While this sounds like it could turn into a messy mishmash of gimmicks and ideas, McDonagh balances everything with a light touch and sharp eye. There’s a constant rise and fall to these elements in the plot, while the pace never falters for a beat. Graphic bursts of carnage are countered by humor, and when the film is about to become too cheeky, he drops something genuine and touching on you, just to keep things from getting predictable.

Farell’s Marty may be a lovable drunken Irish lout to all of us, though lately he’s done way more drinking than writing, but his charms have started to wear thin on his girlfriend (Abbie Cornish). His latest script has a title, weirdly enough it’s “Seven Psychopaths” (the protagonist happens to have the same name as the film’s writer, curious), but no actual script. His actor buddy, Billy (Sam Rockwell), has his back, however. Rockwell is in full gleeful wing-nut mode as the type of guy who gets into a fistfight with the director at auditions, and who steals dogs on the side, returning them for reward money.

When Billy steals the wrong dog—it belongs to Charlie Costello (Woody Harrelson), a brutal, pitiless gangster, who, in all the world, only loves his Shih Tzu—they find themselves, along with Hans (Christopher Walken), pursued by a psychotic thug. Hiding out in the desert, the trio takes peyote and they collaborate on Marty’s script. And Walken tripping balls in Joshua Tree, talking into a handheld tape recorder, while Marty drinks himself into oblivion, and Billy plots their final, bloody, triumphant standoff, is one of the best things you’ll see in a movie this year.

There’s a strange internal beauty, and a manic, lunatic logic to McDonagh’s characters and narrative. At the core, the film is really about stories and storytelling. Through the writing process, and the subsequent scenes that come to life inside of “Seven Psychopaths” itself, you witness the inner desires, neuroses, fears, and hopes of each of the primary characters. Stories unfold around them, enveloping them, informed by, and informing, their predicament.

Each tale, and each individual, is soaked in its own sense of sadness and loss, but a pitch-black gallows humor, and the occasional exploding head, keeps the proceedings from getting too weighty and grave. In this the film is wildly successful. For a script this intricately layered and thematically dense, the film never falters as it builds towards the only climax that can satisfy all that the story demands.

In case you haven’t grasped it yet, the point to all of this is that you should go see “Seven Psychopaths”. Despite the fact that I think it is great, it’s been difficult to write about. At the basic level it’s a blast, bitingly clever and inventive, and ludicrous in its violence. The friendship between Marty, Billy, and Hans is heartfelt and genuine, and as absurd as the premise is—seriously, Tom Waits as a bunny-cuddling serial killer killer?—it somehow never rings false. A movie obsessed with itself—though one that never comes across as pretentious our self-important, a credit to McDonagh and the actors—it presents the problem of living life as if it were a movie, and the misguided expectations and tragic disappointments of existing that way.\
Posted by Brent McKnight at 10:21 PM