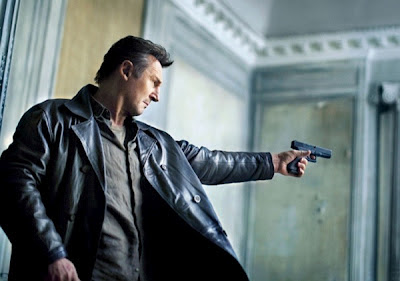 Bryan Mills (Liam Neeson) is one pissed off dad. And he’s back for another round of daughter-protecting ass kicking in “Taken 2”. Sure, he’s a little stiffer, a little greyer, and things hurt a little more—he grimaces every time he stands up, like maybe he has bad knees. Still, he manages to bring it pretty well. “Taken 2” is predictable, comically serious, and in reality, kind of shitty. So of course a part of me loves it, though I won’t claim that it’s any good.

If “Taken 2” featured anyone other than Liam Neeson, it would be a direct-to-video footnote. The Academy Award nominee sure is slumming it here. In fact, the only thing that truly sets the film apart from the DTV herd is the production value. Director Olivier Megaton (“Columbiana”) tosses in an array of big, sweeping helicopter shots. A funeral at a cliff-side Albanian cemetery, a foot-chase across tightly packed Turkish rooftops, and random, innocuous scenes of cars driving up dirt roads, are all given similar treatment.

Mills killed a lot of bad dudes in the first movie. No one shed any tears for them, except of course their families. Caricature gangster Murad Krasniqi’s (Rade Serbedzija) son was among the dead. Remember the guy that got hooked up to a car battery? That was Murad’s kid. So he gets together with some of his stock Albanian criminal bros, and they set about on a mission of revenge. This turns out to be easier than you might think, especially because through a contrived set of circumstances, Mills, his daughter Kim (Maggie Grace), and ex-wife Lenny (Famke Janssen) just so happen to be nearby, vacationing in Istanbul. What a coincidence.

When the family gets to Turkey things seem hunky-dory all around. Bryan is happy to have his little girl nearby. Kim, in turn, seems to be coping well with having been abducted, drugged, and sold as a sex slave. She even sets her mom and dad up on a date so they can rekindle their romance. Adorable. But then guess what happens? You’ll never get this, not in a million years. The Albanians try to kidnap everyone, with murder and pimping on their mind. What? Bet you didn’t see that one coming.

That’s the biggest problem with “Taken 2”, it’s completely obvious at every step, and predictable to the point where every ounce of tension evaporates. No matter how many scenes you stage of Mills stalking down a dimly lit corridor like a man on a mission, while driving music plays over the top, you can’t create tension where the is none. This isn’t only an issue with the sequel, the first installment suffered from the same affliction.

You never once, not for one single moment, believe that the hero won’t succeed. Even when fighting four armed men, Mills is never in any actual danger. In a movie like this you certainly need to have a badass hero, but to a point. When you go too far, make a character nearly invincible, it hurts the film. There has to be some realistic peril, no matter how extensive his “particular set of skills”, and watching “Taken 2” you know that it is only a matter of time until he gets what he wants. There’s no worry involved.

Full of family friendly PG-13 violence, Bryan pummels his way though a sea of faceless villains, all over Istanbul like he owns the joint. For everyone that dies in this film, you rarely see any blood other than slip lip. Nor is shooting a continuous act. The pull of the trigger and flash of the muzzle are followed by a shot of a man falling down. There’s a strange level of disconnect between cause and effect in these moments. A nice car chase roughly bisects the film, but the fighting in “Taken 2” leaves much to be desired. We get it, he’s older, slower, but the fisticuffs are hacked up and cobbled together in a frantic mess of lightning quick cuts. The way they’re edited, they resemble spastic cinematic slap fights.

Not a good movie by any stretch of the imagination, I admittedly enjoy “Taken 2” once it gets moving. Be warned, this isn’t necessarily a recommendation for most of you since my tolerance for questionable movies with gaping, glaring flaws is quite high. Subpar in so many ways, there’s something appealing about a movie with absolutely no sentimentality and not a trace of moralizing. Mills killed Murad’s kid because they kidnapped his daughter. Murad wants to kill Mills because of those earlier killings. Mills wants to kill the Albanians because they’re after his family.

Simple, practical, and detail oriented, the movie moves forward much like Bryan Mills, with one goal, and the straightest possible path to get there. Don’t expect subtlety or intricacies. The best way out of his particular sticky situation is to kill everyone who could possibly come after him in the future. So that’s what he does. Fans of DTV action will dig “Taken 2” the most, but the whole thing is just blah and immediately forgettable.
Posted by Brent McKnight at 9:52 PM

Great review Brent. Loud, dumb, and idiotic, but also a bunch of fun if you love seeing Neeson run around, shooting, driving, and killing anybody that gets in his way. Can’t say I loved it, but I had a good time with it.