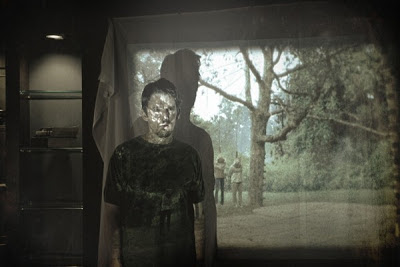 Though it isn’t going to blow any minds, and won’t win over a landslide of new horror fans, Scott Derrickson’s (“The Exorcism of Emily Rose”) latest outing, “Sinister”, is a solid spookfest. You’ll find some well-worn genre tropes—think creepy kids, mysterious footsteps in the empty attic, and a house that’s always dark, even in the middle of the day—and you’re going to chuckle a few times at some cheesy bits, but overall, the film accomplishes what it sets out to do.

Following the once-you-see-something-you-can’t-unsee-it train of though, “Sinister” toys with the idea of the found footage subgenre. Ellison Oswalt (Ethan Hawke) is a harried true-crime writer, who, a decade ago, scored a critical and financial success with his first book. The intervening years have been spent chasing that particular dragon, dragging his family from the scene of one grizzly murder to another, hoping to replicate his earlier triumph.

Ellison is prone to plopping his family down in a house near a crime scene. Though this time, desperate and in dire financial straights, he moves his dutiful wife Tracy (Juliet Rylance), and awkward kids, Ashley (Clare Foley) and Trevor (Michael Hall D’Addario), straight into the house where an entire family was strung up in a backyard tree. And of course he doesn’t say anything about the house’s history. That strategy can’t possibly backfire.

Upon moving into the death house, Ellison discovers a cardboard box full of super-8 reels. Seeking inspiration, some insight into the family’s daily life, he sits down to watch what he thinks are their home movies. Instead of preserved scenes of domestic bliss, he’s horrified to discover the films contain a series of brutal murders. Shot from the point of view of the killer, these scenes are the most effective part of “Sinister”. Dark and gritty, it is unnerving and uncomfortable to sit in the dark and bear witness, along with Ellison, to these hideous crimes. Each is disquieting in its own special way. Fresh twists on found footage, these images are the highpoints of “Sinister”, and nothing else in the movie lives up to these moments.

Ellison’s first reaction is a natural one: call the cops, who, incidentally, don’t much like him, as his books are often critical of their profession. But most of us aren’t driven by an all-consuming desire for fame, anxious about reclaiming past glories. He, however, is so predisposed, and realizing he’s onto something huge, keeps the films to himself. Hawke, who doesn’t seem to age, personifies this conflict. In his heart he’s torn between seeking justice for the victims of unsolved crimes, and gaining a place in the public eye again. Not even honest with himself about his own motives, Ellison’s desires push him further and further into the darkness of the films.

At times you suspect that you’re supposed to wonder if Ellison is actually being haunted as such, or if he’s simply losing his shit due to a combination of pressure and alcohol abuse. This feels like something that may have been a part of the script at some point, but it is such a minor hitch that you never seriously question that the spooky things going on are actually happening. The is-this-all-in-his-head idea has been done a lot lately, and it is nice to see a horror film content to just tell a scary story and not be some sort of deconstructionist essay on genre filmmaking.

While “Sinister” is definitely an Ethan Hawke vehicle—most of the film is taken up by Ellison wandering through his under lit home, making frightened faces—James Ransone (“The Wire”) hijacks every scene he’s in. Dubbed Deputy So-and-So, he’s a local cop, one you initially take as a stock country rube. After proving that there’s more to the character than meets the eye, he brings an honesty, shoot-from-the-hip straight talk, and sense of humor that play off of both Ellison’s character and the overall atmosphere of the film.

“Sinister” runs into a large problem when it comes time to explain things. As Ellison searches for answers, discovering connections between the obviously related killings, new issues and questions arise. By the time he’s Skyping with a college professor (Vincent D’Onofrio), the answers he gives (which you already know if you’ve seen any of the trailers or TV spots) feel like an afterthought. And the old-world supernatural evil that stands-in as the villain—and bears he unfortunate name Mr. Boogie—is a blatant attempt to launch another family of horror films. It easy to imagine a world where a new, hastily made installment of the “Sinister” franchise drops every year about this time.

For the most part, “Sinister” is standard stuff. You get some spooky atmosphere, a few moments of laugh-out-loud silliness, and a great number of things going bump in the dark. You wonder why Ellison doesn’t watch all of the movies at once, instead choosing to draw out the process, and the end won’t shock or amaze anyone even marginally versed in the genre. However typical, “Sinister” does work okay, and is exactly what it tries to be: a spooky, perfectly serviceable horror movie, just in time for spooky-horror-movie season.
Posted by Brent McKnight at 9:43 PM

Good review Brent. Not as terrifying as I would have liked it to be, but still a pretty freaky movie that builds and builds up to a pretty intense ending.