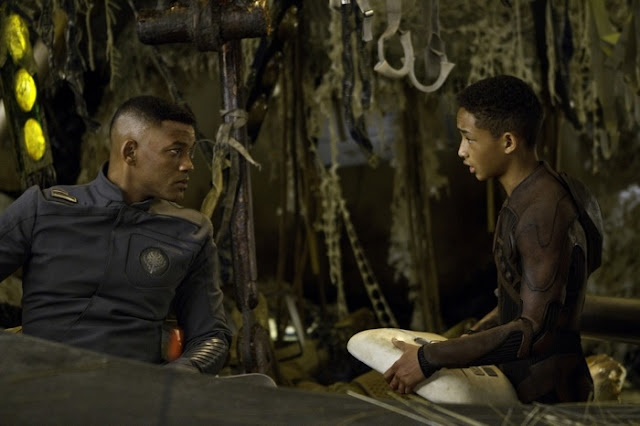 You have to hand it to M. Night Shyamalan. For a filmmaker most known for forcing unearned, out-of-left field—some may say asinine—twists into every movie at inopportune moments, he certainly resisted that urge with his new sci-fi adventure After Earth. It couldn't have been easy for him, and there are times in the film when you, and the entire audience, wait for that holy-shit-it-was-all-a-dream moment, a moment that thankfully never materializes. There are a few groaners, but the closest thing to a twist is nothing more than a poor decision in the writing process that bestows way too much empathetic power on a giant bird.


There is, however, a back side to this particular coin. Unfortunately, the lack of unnecessary complications is the only thing After Earth has going for it. I was rooting for the guy, too, but this is a pretty bad movie. The entire film is predictable, dull, and boring as all hell. It’s the opposite of what you expect, as if Shyamalan, who co-wrote the script with Gary Whitta, took great pains not to stray from the most obvious path, to not to try anything different.

2013 is a year where science fiction renders the surface of our planet uninhabitable, or, at the very least, damn near. Between Elysium, Snowpiercer, Oblivion, Fringe, and probably more to come, our little blue planet is in for a rough go. In the case of After Earth, when we ruin the planet for implied reasons of massive environmental degradation and war, we abandon ship for the vague haven of a planet called Nova Prime. This evacuation was 1000 years ago.


Aside from being tedious, the biggest problem with After Earth is that it does zero world building. Shyamalan shows you a few futuristic structures, the characters wear full body space suits, and Jaden Smith’s voice over feeds you a couple nuggets of informaiton, and you’re expected to accept everything else as this hazy, unclear blob, this floating undefined mass of a future. Even in straight up fiction you have to set the stage better than that, and creating a believable universe is doubly important in the speculative realm. This omission is too bad, too, because this is a huge missed opportunity, and there are some potentially cool things going on. For example, the ships.

From all appearances, the crafts that carry the slightly estranged, and unfortunately named, father-son duo Cypher and Kitai Raige (real life father and son Will and Jaden Smith) on a bit of an interstellar road trip, are organic in nature. At times they appear alive, as if they’re breathing. Viewed from within, there’s a framework that resembles the interior support structure of an old wooden ship—a thematic fit for their voyage into the unknown—but this framework also resembles the ribcage of some massive animal. That’s a pretty cool idea, right, that maybe they were able to merge technology with a living creature? But nothing ever comes of that, and you’re left wondering why the hell they made their spaceship out of what looks like balsa wood. This is just one example of how After Earth spends no time or effort establishing the world the characters inhabit. All you get are CGI backgrounds, props, and oblique mentions of things you have no context for, like an intergalactic governing body that is never spoken of again. 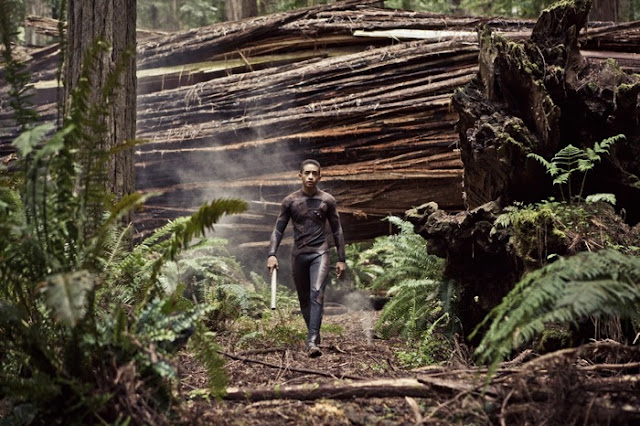 Though it provides refuge to the human race, Nova Prime is not without its own specific problems. There are Ursa, alien hunters that, while blind, can smell a pheromone your body excretes when frightened. They literally smell your fear, which is an issue because they look like the bastard child of the Rancor and Giger’s aliens. Try not to crap your pants when you stumble upon one of these things whle out for a jog. Lucky for the human race we have Cypher Raige, a super space commando, on our side. He pioneers a skill called “ghosting,” a badass Zen technique to control your fear. Being such a heroic tough guy, which an ultra contrived scene with a wounded soldier he once saved tells you, he’s also an absentee father. When he’s home, he has no idea how to interact with his boy, treating him like a subordinate instead of a child.

A river of resentment and misunderstanding flows both ways between them, but hopefully this trip will fix that. You’ve seen this story countless times before in Lifetime movies and After School Specials. Cypher is so matter of fact that he’s laughable. You get the point, he’s removed and disassociated, but it’s still funny on the rare occasions where it isn’t annoying. And in the future everyone talks in a silly, stilted manner. Speech patterns are sure to evolve over millennia, but that doesn’t mean listening to ridiculous accents won’t provide unintentional comic relief. Given the monotone performance by Smith senior, and an angst filled turn by Jaden—he’s the opposite of his father, full to the brim with feelings—After Earth isn’t particularly interesting from a content perspective. You’re never invested in either character—they’re too stock—and when there are really only two people in your movie, you better give a shit about at least one.

The bulk of After Earth takes place after Cypher and Kitai crash-land on a planet that turns out to be Earth, now reverted to a feral, natural state. Cypher is gravely wounded, and sits back, guiding his miniature self on a 100-kilometer trek across the wilderness to retrieve a homing beacon. Along the way the kid fights monkeys, birds, snakes, jungle cats, and all sorts of other beasties. And yeah, they were transporting an imprisoned Ursa, which is now on the loose, but you don’t have to worry about that for most of the movie. Kitai displays no sense of wonder, awe, or curiosity at seeing home world for first time, and despite all the adventures, the pace drags, the action is tepid, and the plot plods on through a series of predictable scenarios with equally predictable outcomes.

The science is…lets just call it questionable. Like when Cypher tells Kitai that every creature he will encounter out there has evolved to kill humans. First, its only been 1000 years, and the changes seen over that period of time wouldn’t be quite as drastic as old dad makes them seem. And second, how can animals and plants evolve to kill humans when there are none around? These are most likely the only human being any living things on this rock has ever encountered. The rest just sounds like they’re making shit up as they go, without taking any scientific realities into account.

After Earth even looks like crap. Despite questionable narrative choices in many of Shyamalan’s previous films, the man has a great eye for composition and staging, and strong sense of camera movement. He makes pretty films, but none of that ability is on display here. From a technical standpoint, this film is of the most basic, phoned in sort.

Attempts to create tension fail at every turn, you know the only character that can stand up isn’t going to die 20 minutes in. The cumulative result of all of these disasters is that After Earth is a weak, ugly, forgettable science fiction movie, and a waste of 100 minutes of your life. For that fact alone this is a disappointment.