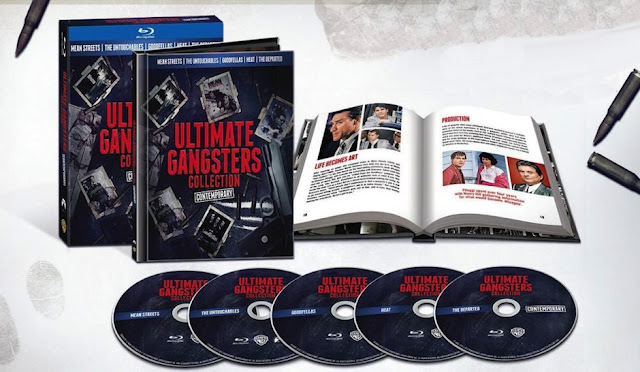 As a kid “Top Gun” told me I should to be a fighter pilot, James Bond movies showed me how awesome it is to be a spy, and gangster movies made me want to be a gangster and live a life outside the law. None of those career options panned out, but to celebrate the long, illustrious history of mobsters in cinema, Warner Bros. has released their “Ultimate GangsterCollection” so you can live vicariously through some of he all-time fiercest movie criminals in history.

The “Contemporary” installment features five modern classics from masters of the genre Martin Scorsese, Brian De Palma, and Michael Mann. This is quite a package, and includes crisp new Blu-rays, a metric ton of cool extras, and a 32-page booklet that may be as interesting as the movies themselves. All of the bonus material on the discs themselves has been released before in one form or another, but they’re still worth a gander. If you’re a fan of gangster movies, do yourself a solid and pick this up today.

We begin our foray into the dark underbelly of society with Scorsese’s 1973 “Mean Streets.” Perhaps more than any other film in his cannon, this sets the tone for his career, especially the early stagers. Not just the subject matter, “Mean Streets” is the thematic and tonal godfather for so much of his body of work that follows. As Roger Ebert said, “Mean Streets” is “one of the source points of modern movies.” He meant that as more than just gangster movies, and he isn’t wrong.

The film captures the grim, gritty reality of  New York City street life, with many of the characters based on people Scorsese actually knew growing up in Little Italy. And themes of sin, religion, strict but skewed moral codes, survival on the outside conventional lifestyles, and more, provided fertile material here and for the celebrated director’s future work. This is also the jumping off point for the collaboration that lead to Robert De Niro’s best work.

The Blu-ray comes with the short, vintage documentary “Back on the Block,” which follows Scorsese and a couple buddies on a walking tour of the old neighborhood. Then 31-years-old, it’s fun to see for yourself how he managed to portray the streets he grew up on in his film.

De Palma’s offering in this collection, “The Untouchables,” is both a contemporary film as well as a throwback to the classic heyday of the American gangster, Prohibition. It also features the great white shark of all mobsters, cinematic or otherwise, Chicago’s own Scarface Al Capone (De Niro again, he pops up rather often in this collection). Following the exploits of law enforcement superhero Eliot Ness (Kevin Costner) and his band of hooch hating do-gooders, this is worth watching just to listen to Sean Connery talk about how you take down Capone. Remember, never bring a knife to a gunfight. Words to live by indeed. There are countless other reasons to check out “The Untouchables,” but this is chief among them.

Put together in 2004, “The Script, the Cast,” is a 19-minute documentary comprised of archival footage that digs into the behind the scenes matters on “The Untouchables.” Did you know that Mel Gibson almost played Eliot Ness? How would that change your perception of the finished product?

I know multiple people who cite the year “Goodfellas” lost out on the Best Picture Academy Award to “Dances With Wolves” as the very moment that they stopped putting any stock in the Oscars, and I don’t disagree. It was a travesty. And I like “Dances With Wolves,” but there isn’t even an argument to be made that it’s a better movie than “Goodfellas.” “Goodfellas” is a true American epic. This rags to riches story about pulling yourself up by your bootstraps, then losing it all through greed and corruption, is quintessential Americana given a modern update.

Based on a true story, you relish in Henry Hill’s (Ray Liotta) scrape up the ladder from small time errand boy to well respected, powerful gangster, and his ultimate fall from grace. We love to watch them get built up almost as much as we loves to see them torn down right in front of our faces. Throw in a cast includes De Niro, Joe Pesci, Lorraine Bracco, Paul Sorvino, and everyone else in Hollywood who looks like they’ve actually broken a man’s knee with a baseball bat, and you’ve got one of the best movies ever made, gangster or otherwise.

The “Goodfellas” Blu comes with not one, but two feature length commentaries. The first, “Cast and Crew,” features a ton of people, including Scorsese, writer Nicholas Pileggi, Liotta, Sorvino, Bracco, more actors, cinematographer Michael Ballhaus, and a couple producers. Then there’s the “Cop and Crook” track that is the real Henry Hill and Edward McDonald, the former FBI agent who took Hill into witness protection. Listening to Hill talk about the fictionalized movie based on his life makes this one of the more unique and interesting commentaries you’re going to come across.

You know you’re doing something right in your movie if it inspires a copycat heist and an insane, real-life shootout that goes down in the streets. Michael Mann’s “Heat” did just that. Even in our present state of frantic, Michael Bay induced, energy drink fueled action movie, that epic gun battle through the streets of Los Angeles is seriously nuts. “Heat” is more of an action heavy thriller, than traditional gangster fare, but I’ll never get tired of watching Al Pacino’s Vincent Hanna beat the crap out of Henry Rollins. Brings a smile to my face even on the darkest days.

While most of movie gangster culture centers around the classic haunts of New York and Chicago, “Heat” shows that, even though it’s sunny all of the damn time, LA can hang with big boys, and brought a little darkness to the City of Angels. De Niro and Pacino are close to their peaks as performers in “Heat,” and the story is a complex, layered marathon full of insightful, real characters, and whip smart dialogue.

This disc comes with eleven—that’s right, I said eleven—deleted scenes. Some of them are interesting and worth a look for fans, but for a movie that already clocks in at 170 minutes, you don’t need too much more. A nice extra, but you have to be glad they were left out, otherwise you’d be there all night long.

We close out our collection with the most recent offering, and, shocker, it’s another Martin Scorsese picture, 2006’s “The Departed.” This is also notable because it’s the only movie in this compendium that doesn’t prominently feature Robert De Niro. The role De Niro would have played is taken up by Jack Nicholson, so you’re not losing much, if anything. And the rest of the cast includes Leonardo Di Caprio, Matt Damon, Mark Walhberg, and a who’s who of others, so you might not even notice old Bobby D isn’t there.

A loose remake of Andy Lau’s 2002 Hong Kong thriller “Internal Affairs,” “The Departed” dives headfirst into Boston’s criminal underworld, and ranks up there with Scorsese’s best and most celebrated work. It also happens to be the film that finally sent him home with a Best Director Oscar. Twisted, epic, and tragic, “The Departed” is full of lies and betrayals and all manner of twists and turns. It’s a damn entertaining film, and brings Scorsese back to what he does best, tell sprawling tales of hardened men that somehow manage to resonate with the rest of us.

Like “Heat,” “The Departed” comes with a glut of deleted scenes, nine to be exact. They also arrive with an introduction from Scorsese himself. “The Departed” is not a short movie by any means, the run time is 151 minutes, and you probably don’t need to watch that much more of it. It’s a nice extra, but be glad something, anything wound up on the cutting room floor, or this movie may never end. 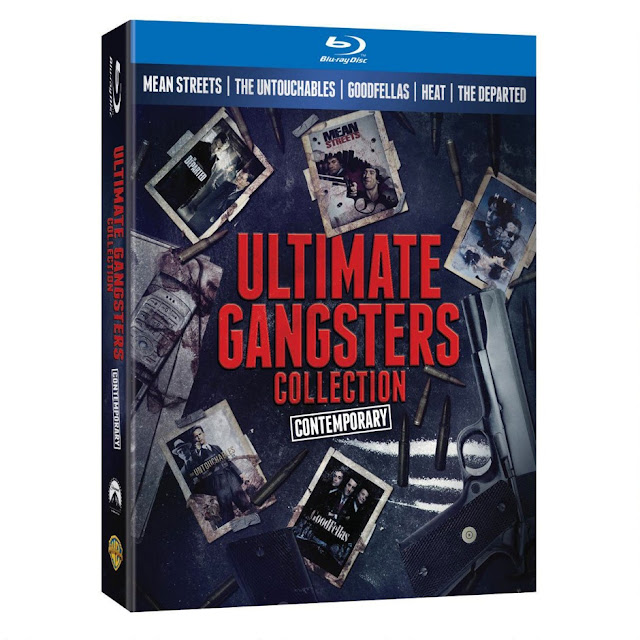 Posted by Brent McKnight at 9:53 PM