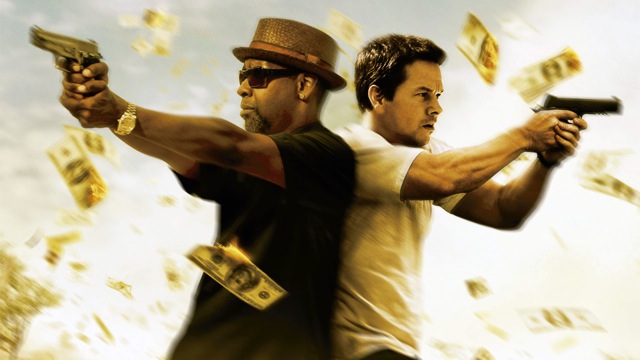 If you walk away from Baltasar Kormakur’s latest actioner, “2 Guns,” having learned one lesson it will be this: everyone will betray you, always. That’s the basic point of the movie. Everyone will screw you over in the end, even the people you call your People, and when they do it, that’s when it hurts the most. That’s also why undercover DEA agent Bobby Trench (Denzel Washington) doesn’t have people. In fact, he has a few connections as possible. That’s about as deep as you’ll get in “2 Guns,” which falls into that category of late summer—or at least post-every massive blockbuster of the season—action film that looks groan worthy and generic before hand, but turns out to be a ton of goddamn fun. Last year “Premium Rush” surprised a lot of people, this year “2 Guns” might just do the same.

While he has yet to blaze any new trails, Kormakur proves himself, once again, capable of making solid, entertaining action yarns. Following up “Contraband,” a remake of his own “Reykjavik-Rotterdam,” he explores the same, gritty territory, only this time he frames it as a throwback to R-rated action comedies from the 80s and 90s. You know what we’re talking about—“Lethal Weapon,” “48 Hours”—the ones where there was always a ton of violence, just as many laughs, ample F-bombs, and that always, always contained at least one topless woman, often at surprising moment. (I’m thinking of that early parking garage chase scene in “Tango & Cash” when one car slams into a parked car, and a topless woman pops up from the back seat for no reason whatsoever other than to be topless.). “2 Guns” takes this formula and runs with it.

Trench only has two people in his life, Deb (Paula Patton), who exists solely to get naked, be used as bait, and ultimately screw him over, and his outlaw partner Stig (Mark Wahlberg), a shit-talking sharp-shooter who, oh yeah, turns out to be a Navy cop. Minds blown, unless you already knew anything about the movie—like you saw the movie poster on the way into the theater. A convoluted plot, seemingly a symptom of the 2013 summer movie season, boils down to this: by robbing a bank they think they’ll be able to take down a vicious Mexican drug lord (Edward James Olmos). However, when they find exponentially more cash in the vault—$43 million as opposed to the expected $3 million—it turns out the bank was the stash house for a secret CIA slush fund. Then everyone tries to kill them. A lot. 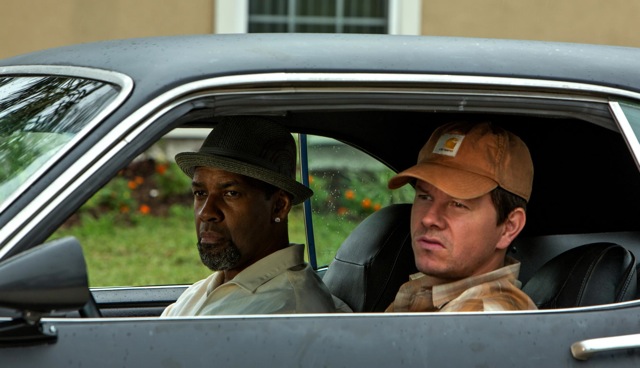 The real fun of “2 Guns” is the interaction between Washington and Wahlberg. Bobby is slick and smooth, the guy who knows a guy, the guy who can get you whatever you need, no ifs, ands, or buts. On the other side, Stig never shuts his damn mouth. He has no filter, and absolutely no boundaries, the kind of guy who is exhausting to be around for an extended time, but who is a freaking blast to watch on screen. And Wahlberg is in his element here, flirting with waitresses and showing up thugged-out goons, despite the fact that they’re walking around with some dude’s head in a bowling bag. The script tries to do more, to create a dueling sense of dueling ethos between the two men, but it never truly develops. One simply believes there is a code, one believes there isn’t, and while neither is completely right, neither is completely wrong. The two leads definitely seem to like each other, each brings personality and charisma to their characters, and the dialogue is sharp and cracks throughout. All grins and smiles on the surface, violence lurks not far below, just to keep you tethered to the real world consequences.

As much fun as Washington and Wahlberg are, the real star of the show is Bill Paxton as Earl, the bolo-tie wearing CIA agent who wants his damn money back, and is willing to do just about everything, including playing Russian roulette with a man’s testicles, to make that happen. Last time out, in “Contraband,” Kormakur had Giovanni Ribisi as the villain with silly facial hair and a weird voice. In “2 Guns,” it’s Paxton’s turn to fill this space. With his spotty, pubescent mustache, and faux-southern drawl, he’s both goofy and terrifying, and also having a ton of fun. That’s the key to “2 Guns,” everyone involved is having a great time, from the top down to James Marsden’s double-crossing Navy officer.

Bobby and Stig tool around in their badass American muscle car, or ultra-manly trucks, being macho, looking cool as shit. Based on Steve Grant’s comic, you definitely get that adaptation feel. The action and humor are overblown in that way that makes them pop on the page, which rarely translates well to screen—this is an exception—and you can practically break the plot down into individual issues, each chapter with its own internal arc and focus. Because of this fact, and the mixture of action and humor, you can put “2 Guns” in the same category with the “RED” movies, only the violence is much more realistic—you know, for a Hollywood action movie—and the comedy is much more profane. Both of which you totally appreciate.

“2 Guns” doesn’t delve into any unexplored territory, but it delivers precisely what the it promises, shootouts and wise cracks. This isn’t the kind of action vehicle you all that often anymore. There are no huge, computer generated spectacles, or rapid-fire editing that gives you seizures. This calls to mind my favorite style of action, from a time when every movie didn’t have to cost $100 million, and when movie stars made movies that kicked a whole lot of ass. And to finally have that this summer, is a nice breath of fresh air.

Posted by Brent McKnight at 8:07 PM