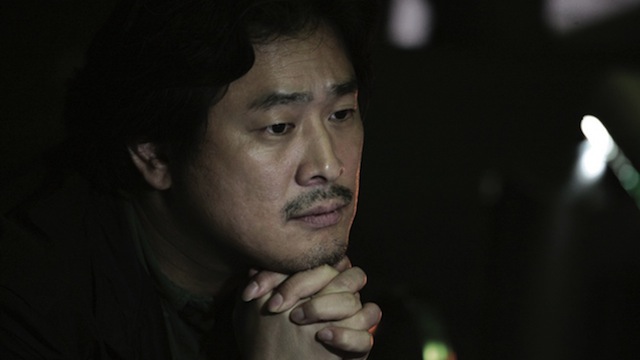 Anytime Park Chan-wook makes a movie, I will be the one at the front of the line jumping, clapping, possibly squealing, and burbling and drooling like an idiot. The Vengeance Trilogy (Sympathy For Mr. Vengeance, Oldboy, and Sympathy For Lady Vengeance) is damn near perfect, Thirst is one hell of a spin on the vampire tale, and his English-language debut, Stoker, was my favorite movie of 2013. He’s not the most prolific filmmaker, but he’s a damn hit factory, and he’s got one in the works that sounds phenomenal.

His films are gorgeous and steeped in the darkness that lurks inside of us all, which makes Tracking Board’s report that he’s adapting Japanese writer Project Itoh’s sci-fi novel Genocidal Organ the best news I’ve heard all week. Grim and ugly, this sounds like it has a much broader scope than most of Park’s movies, but themes of death, deconstruction, global terror, self-aware storytelling, and more, sound right up his cinematic alley.

Here’s a synopsis of the book from Amazon:

The war on terror exploded, literally, the day Sarajevo was destroyed by a homemade nuclear device. The leading democracies transformed into total surveillance states, and the developing world has drowned under a wave of genocides. The mysterious American John Paul seems to be behind the collapse of the world system, and it’s up to intelligence agent Clavis Shepherd to track John Paul across the wreckage of civilizations, and to find the true heart of darkness—a genocidal organ.

There’s no word on when Genocidal Organ might get rolling, but it could be a while as Park is currently working on a Korean adaptation of Sarah Waters’ Victorian crime novel Fingermsmith, retitled Agassi, and has the western The Brigands of Rattleborge in the works. Fortunately it sounds like this is still in the early stages of development, but it’s certainly one I’ll be keeping my eye on.
Posted by Brent McKnight at 1:02 PM