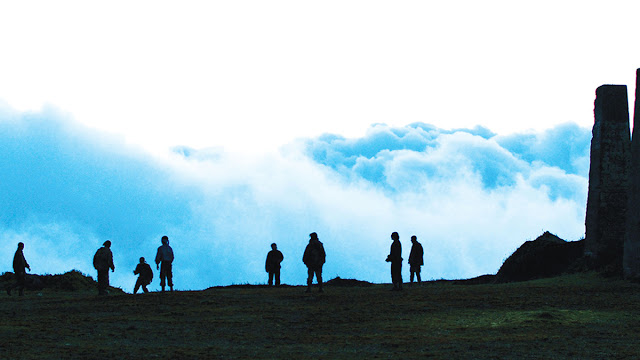 High atop a remote mountain, a cadre of eight teenagers with names like Rambo, Smurf, Boom Boom, and Swede, armed with automatic weapons, guard a prisoner and keep watch over a milk cow. A faction of a mysterious group known only as The Organization, this adolescent guerilla squad, left to their own devices, breaks down as loyalties shift and allegiances falter, and their crumbling structure and sanity build towards violence.

Columbian director Alejandro Landes’ Monos watches like a pubescent war-is-hell fever dream; a lush, languid nightmare scape. It’s garnered well-deserved comparisons to Apocalypse Now and Lord of the Flies—there are obvious callbacks to both—but for my money, it’s Red Dawn filtered through the nihilistic sensibilities of Herzog or Jodorowsky. Maybe Aguirre: The Wrath of God by way of Predator.

More tactile sensation and mood than beat-for-beat narrative, Monos cultivates a surreal, dreamy vibe. Starting out, these kids border on feral, and as the film progresses they cling to the very edges of mental and physical survival. But what begins as unsupervised children blowing off steam and enacting hormone-driven desires quickly turns dark and sinister. Some manage to keep hold, while others go fully wild, relishing in untethered savagery, experiencing the freedom of flight as they plummet of the cliff.

Landes and cinematographer Jasper Wolf make excellent use of the various natural surroundings. Aerial shots drive home the isolation, dwarfing and engulfing the teen army, using scope and scale to illustrate how minor and insignificant we are in the grand scheme. Handheld cameras frame the jungle as an immersive, inescapable prison. The landscape is both gorgeous and harrowing, beautiful and dangerous, familiar and otherworldly. This isn’t a wholly alien environment, but the way it’s filmed and staged, often awash in omnipresent fog, feels ethereal and eerie.

[Read More: Werner Herzog's 'Ant-Man' Would Have Been So Much Cooler]

Mica Levi’s score enhances the mounting sense of dread as the hormonal soldiers take shrooms, ride a glow-stick-covered cow, and randomly discharge their weapons—what could possibly go wrong? The music and sound design fashion an apocalyptic aural wash, oppressive and squeezing as the tension and pressure escalate.

The young actors generally give raw, visceral performances, encompassing both the grim nature of their story, but also the alternating insecurity, joy, and excitement of youth. Moises Arias as Bigfoot stands out, with a kind of flip-side-of-the-coin rendition of his Kings of Summer role, though others by no means lag. They offer various portrayals of and reactions to innocence and youth exploited and manipulated, enlisted in a vague cause they barely seem to notice let alone grasp.

Still, some of the characters lack definition. In reality, more than eight different people with distinct personalities, they blend together into blobs. Rather than eight individuals, they present as two groups—those who are unsure of their current trajectory and those who dive headfirst into the chaos.

Monos does splinter and lose focus at times. Late in the game, threads split off and spool out in new directions, creating a scattered feel where it was once tightly honed in. Even at a hair over 100 minutes, portions of the middle lag and slow the pace, tempo, and narrative momentum to a crawl. It picks up again, but there’s a definite decrease in velocity in the midst.