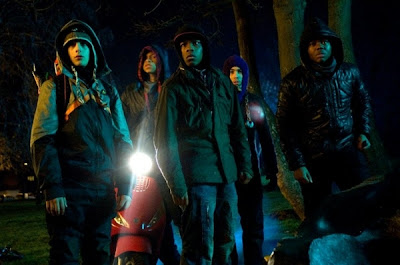 Working with a group of young, unknown actors, Cornish elicits incredible performances from all of them. Not only do they do they have the quick, sarcastic back and forth that makes them feel like an actual group of friends, but they pull off an emotional depth that you don’t find in many younger performers. They care about each other, and in turn you care about the little fuckers. They even get to have a fully realized character arc, transforming from a gang of punks mugging one of their neighbors in the opening scene, into defenders of their neighborhood who display all of the characteristics of true heroe. They’re brave, dedicated, live by a strict code of honor, and are willing to sacrifice themselves for the greater good.

After the gang made up of Moses (John Boyega), Pest (Alex Esmail), Dennis (Franz Drameh), Jerome (Leeon Jones), and Biggz (Simon Howard), robs Sam (Jodie Whitaker), a nurse who lives in their South London housing project, a UFO crashes into a parked car next to them. Since Moses is the leader he investigates, only to be attacked by a creature described later by Ron (Nick Frost) that looks as if a “monkey fucked a fish” and had a baby. The boys stomp the creature to death, and brazenly show off their trophy, full of cocky bravado as they recount their deeds. Little do they suspect, however, that this is only the beginning, and before long other aliens plummet to Earth. Only these new visitors are much more aggressive and difficult to kill than the gang’s first encounter.

The aliens are pretty rad. They’re basically a gorilla-esque outline with little concrete detail, so black that they’re little more than shadow creatures even in full light, and the only thing you can see good and proper is their mouthful of vicious glowing teeth. Spooky and sinister, the FX guys rely on subtly rather than going for the photorealistic close-ups that most big-budget fare rely on, you know the ones I’m talking about, the ones that generally look silly instead of frightening.

Not only do Moses and crew have aliens to contend with, they got problems all over. First of all, they run afoul of Hi-Hatz (Jumayn Hunter), the local drug kingpin who runs the block with a violent hand. He wants to step Moses up to a low-level street dealer. When you watch Hi-Hatz hand Moses a package, you hope that he has the sense to say no, to step away—he’s just a kid after all, and you know there’s good in him—but this isn’t that kind of fairy tale. Moses accepts the promotion with a welcome smile, and he’s on a dark, slippery path. That, in fact, is Moses’s journey, from a kid making questionable choices, to a man making the right choices, even when those choices are incredibly difficult.

They also have to contend with the cops who spend most of their time harassing the kids, who happen to be mostly black. This is where the social criticisms come in, about how the authorities don’t give a damn about poor neighborhoods, how the only time the cops show an interest in the block is when they’re there to arrest someone, and how an otherwise decent kid, like Moses, can embark on a criminal career. You get a glimpse of the home lives of the boys, but it is just enough to let you draw your own conclusions. Class, race, and crime are not a black and white issues in “Attack the Block”, some of the kids come from wretched places, but others come from decently happy, intact families. Cornish wisely lets you to take it for what it is. These elements are present, but aren’t so heavy that they distract from the overall movie. If you want to consider different thematic levels, feel free, but it’s just as easy to gloss over them and let the alien invasion mayhem wash over you.

Before long the kids even find themselves on the same side as Sam, their victim from earlier in the evening. And at the core, these are scared kids, trying to be tough and brave, but also being foolhardy and reckless. Remember when you were a kid and you thought fireworks would make excellent weapons in the event of an invasion? (In my case I was preparing for the Russian invasion that movies and TV assured me was imminent by stockpiling bottle rockets and M-80s.) But if nothing else they have heart, they have gumption, attitude, and scream a big fuck-you in the face of authority, aliens, and growing up.

“Attack the Block” is exciting and fun and hilarious and action-packed and a whole slew other descriptions. The story is tight, the characters are smart-ass little bastards, the monsters are freaky. All in all it is a goddamn good time and delivers the best of sci-fi as a genre. “Attack the Block” gets a limited release this weekend, and if you’re in the market for an alien invasion film this weekend, and it is playing near you, you’re way better off going to see this than “Cowboys & Aliens”, in my humble opinion.
Posted by Brent McKnight at 4:53 PM