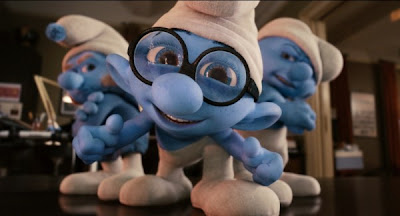 The point I’m trying to make is that I’ve had a special place in my heart for those little blue fuckers for most of my adolescent and adult life. Yeah, that’s gone now. Just poof, disappeared, vanished into thin air. Any residual nostalgia, any fond, lingering memoires are just that, memories. Thanks a lot “Smurfs”, thank you for killing yet another treasured piece of my youth. I’ll bury that shit right next to “G.I. Joe”, “Transformers”, Santa Claus, and “Daredevil”. “The Smurfs” is exactly as bad as most of you, at least those of you out there capable of rational thought, expected it to be.

You know the basics. Smurfs, the brainchild of Belgian drug-user Peyo, are three apples high, inhabit a magical forest, and live in giant psychedelic mushroom houses. There are 99 dude Smurfs, and only one woman, which is creepy. All of them, except Smurfette, the lone lady, and Papa, the patriarch, are named after their dominant personality trait: Greedy Smurf, Vanity Smurf, Passive Aggressive Smurf (not making that one up), Incontinent Smurf (that one I did make up), you get the idea. They are hunted by a crazed, incompetent wizard named Gargamel, who wants to steal the Smurf’s “essence”, which will give him great power.

In this story everything is peachy-keen in Smurf Village. Gargamel (played with over-the-top glee by Hank Azaria) is an idiot and easily fooled. But oh no, Papa Smurf (voiced by Jonathan Winters, who I legitimately thought was dead) has a smurf-pocalyptic vision that Clumsy Smurf (Anton Yelchin) inadvertently helps create. Clumsy, being, well, the clumsy one, smurfs up and leads the evil wizard right to Smurf Village. Through a series of events you don’t give a smurf about, six Smurfs—Papa, Clumsy, Smurfette (Katy Perry), Brainy (Fred Armisen), Grouchy (George Lopez), and Gutsy (Alan Cumming)—get sucked through a magical hole and wind up in New York City. There they meet Patrick Winslow (Neil Patrick Harris) and his pregnant wife Grace (Jayma Mays). Patrick is a middle-management type advertising exec at a cosmetics firm, and he has a chance to make it to the big time if only he can get this ad campaign done on time.

As you can imagine, the Smurfs throw a monkey wrench into his plans. Gargamel teams up with Patrick’s shark of a boss, Odile (Sophia Vergara), and Patrick has to help the Smurfs get home, save his job, and keep his wife from realizing that he’s a complete smurfing tool. Of course, along the way, the Smurfs are going to teach Patrick a thing or two about what is really important in life, like love, friends, loved ones, hugging and kissing and love (did I mention that?) and cuddles and puppy dogs and moonbeams and shit. Like I said, if you do get dragged to this, bring a barf bag because you’re going to need it by the end. It’s so sickly sweet it’s like power-chugging Kool-Aid cut with chocolate syrup.

Obviously “The Smurfs” is aimed at children (you’ll be amazed how many times little blue dudes stabbing a wizard in the ass can make a child laugh), but it also attempts to be one of those kid’s-movies-that-adults-will-like-too. There is the constant use of the word “smurf” in place of curse words, but the intent is readily apparent. It’s like swearing by proxy, and without any of the impact of proper profanity. And let me see, there are references to “Lethal Weapon” (Papa is too old for this smurf), “Braveheart”, “Brokeback Mountain”, and “Midnight Cowboy”, as well as an MMA joke and an ass-licking joke. You’ll also cringe when the Smurf crew—with NPH shredding on the axe—reenacts “Walk This Way” by RUN-DMC. Yep, that happens. It is not okay.

But outside of a few jokes and asides, “The Smurfs” doesn’t do anything to play with conventions or actually make the movie anything but stale. The plot plays out exactly like you know it will, down to Clumsy’s accident that puts Patrick’s job in jeopardy, but that we know in advance will ultimately benefit him. The story is so incredibly by-the-book it feels like they wrote the script on the spot while filming.

One of the most curious elements of “The Smurfs 3D” is the weird fatherly bonding between Papa Smurf and soon-to-be-father Patrick (who spends a fair amount of his time in a CBGB t-shirt, which is a strange juxtaposition). You get the distinct impression that Patrick doesn’t want to be a father, and, I suspect, he has considered trying to escape through some magical whirling hole of his own. But Papa ain’t having none of that. He schools Patrick proper, until he’s stoked that he’s about to have a rug rat running around—smearing crap into the carpet, yanking on his basset hound’s ears—like he didn’t make a horrible, horrible mistake.

“The Smurfs” is a constant, bubbly stream of positive affirmations, aw-shucks-you’re-good-enough-just-the-way-you-are encouragement, and reminders that you really should believe in yourself above all things. It is the most over-simplified, single-note message you’ll ever see in a movie. Sure I feel like a dick trashing a kids movie, but damn, even as a child I would’ve seen through this nonsense.
Posted by Brent McKnight at 4:51 PM

The effects really became quite amazing and I’m glad they took advantage of today’s CGI to make this movie a sensational representation of many other sci-fi and fantasy movies of today. The end is something I recommend anyone would see. I also love how they made Azriel in this movie too, quite funny. My kids liked it though and they have been begging me to buy it on Dec. 2nd so I put the movie on my Blockbuster Movie Pass queue even though it’s not available until Dec. 2nd. It’s so convenient and I get everything on my one DISH Network employee service bill. It’s free for new customers too.