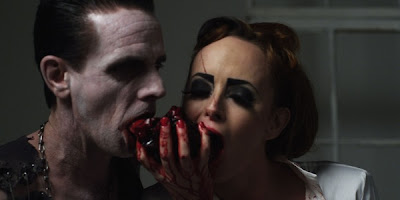 Horror anthologies are a hit and miss affair. While some installments succeed wildly, others invariably fall flat on their face. “The Theatre Bizarre”, the latest in a long and distinguished line of these films, is very much in this category. Moments of near greatness exist right along side segments where you’re counting the seconds until it ends. That’s also part of the fun of anthologies. There’s a sense of giddy mayhem when something clicks and comes together. It gets in, does its thing, and gets the hell out without wasting any time. Shorts can be efficient little buggers from time to time. And even when things don’t work, the time commitment is minor.


“The Theatre Bizarre” calls to mind “Tales from the Crypt” in that the individual chapters are strung together in a framework of another story. Possible schizophrenic Penny (Virginia Newcomb) stares out the window of her dingy apartment, the walls covered in demented scribbling and canted images. She can’t take her eyes off the disheveled theater across the way. When she finally enters the dilapidated auditorium, she finds that it is not abandoned, but inhabited by a troupe of what appear to be automatons acting out horrific scenarios. They are led by ventriloquist dummy come to life, Udo Kier, a demented emcee, host, and guide. These frame sections, written by “Wizard of Gore” helmer Zach Chassler, are where the most striking images of the film live. Penny, with wide, shadow heavy eyes, watches as the plasticine moderator introduces these short forays into the horrifying.

Most of the installments in “The Theatre Bizarre” are low-budget fare, many shot in a single location with minimal cast, and stand as good examples of filmmakers doing a lot with a little. Unfortunately, the most ambitious episode is also the weakest, and the first. Richard Stanley (“Hardware”) directs “The Mother of Toads”, which is just terrible, really regrettable. An anthropologist and his girlfriend scour the French countryside looking for the Necronomican, of course, only to be taken in by a creepy Gypsy woman who has a dark secret of her own. Don’t you hate waking up next to a giant toad creature that you just banged? I certainly do. It doesn’t do anything or go anywhere, the monster effects are dreadful, and the acting makes the monsters look good.

Gore FX luminary Tom Savini adds his two cents with “Wet Dreams”, which doesn’t have much in the way of story, but it does have genital mutilation and a woman with a “Lovecraftian vagina”, so that’s something. Watching this you can’t help but think it’s just an excuse for Savini to tear off some limbs, which, as you can imagine, is a blast. I’ve watched movies for less.

Karim Hussain’s (cinematographer for “Hobo with a Shotgun”) “Vision Stains” has the most ambitious story. A woman discovers that by sucking the ocular fluid out of the eye at the moment of death and injecting it into her own, she can see her victim’s memories, recollections of the life that flashes before their eyes as the die. “Vision Stains” never fully delivers on the promise of the premise, but it is an interesting attempt to do something different rather than a rehash of the standard, expected premises.

The two strongest chapters in “The Theatre Bizarre” are Buddy Giovinazzo’s (“Combat Shock”) “I Love You”, and Douglas Buck’s “The Accident”. In “I Love You”, a smothering alcoholic wakes up covered in blood and has to piece together the dissolution of his relationship. He’s manipulative, passive aggressive, and you want to throttle him yourself, so when his wife says things mean things like, “your penis and my vagina never liked each other,” you feel where she is coming from.

Despite images of death, including a brutal scene where a grizzled biker kills a wounded moose, “The Accident” focuses more on psychological trauma than the horrific. Framed as a little girl asking her mother about the nature of death, why we die, where we go, and all of the usual things kids want to know. The daughter is obsessed with the sinister side of kid’s stories, a proclivity that is exacerbated when she witnesses a man die in a motorcycle accident. More a meditation on death than a straight horror movie, “The Accident” is an effective little joint.

“The Theatre Bizarre” is reminiscent of many of the horror compendiums that preceded it. An up and down and down mish mash of styles and sub genres, overall this is a fun, dark, gory, intriguing, addition to the fold. When one segment stumbles, there isn’t long to wait for something better to come along, and most have at least something to recommend the or make them stand out.

Posted by Brent McKnight at 5:17 PM