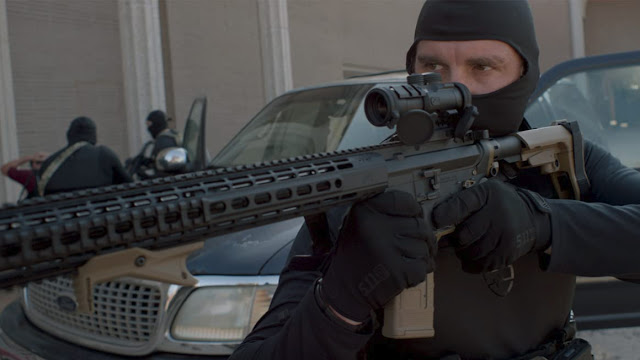 If you’re ever a criminal and think to yourself, “I’m out after this one last job,” just walk away. Right there. Right then. Seriously, nothing good will come from your efforts. You won’t wind up sipping mai tais on a tropical beach, you won’t pay off your lingering medical debt, you won’t wind up in that cozy dream cabin with your happy family or whatever dream you’re after. When you chase a final score, it only ends terribly for you and everyone you care about. Movies teach us this time and time again, but if you still haven’t grasped the concept, Out of Exile is here to remind you one more time.

After a 16-year bit, recently paroled Gabriel Russell (Adam Hampton) is up to his old tricks robbing armored cars. But don’t worry, he has a noble reason, to help get his estranged daughter, Dawn (Hayley McFarland), away from her abusive boyfriend. When a job goes wrong and they kill a guard, Gabe, his brother Wesley (Kyle Jacob Henry) and their partner Marcos (Wilson Navas) find themselves the subject of an FBI manhunt led by Special Agent Brett Solomon (Ryan Merriman). 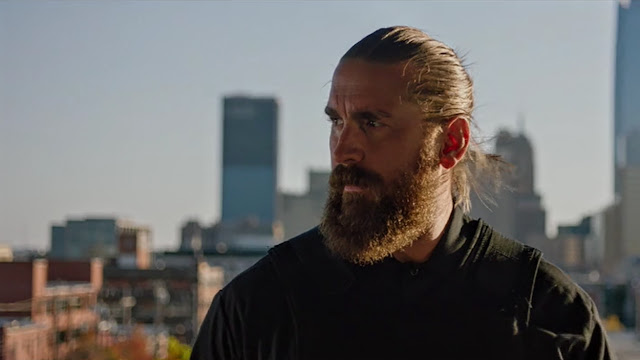 Writer/director Kyle Kauwika Harris’ first narrative feature aims to tell a sprawling, epic crime saga in the vein of Heat or Den of Thieves, a hard-boiled tale of hard men living hard lives and making hard choices. It wants to be about maintaining your soul while living in a moral gray zone, the generational trauma we both inherit and pass down, and cycles of violence that may or may not be inescapable.

And on the surface, it hits all the genre markers. Gabe’s father is a career criminal who handed off his proclivities down to his sons, which in turn informed Dawn’s life. Solomon’s father was also a federal agent, who we are told was at Waco, which haunts him. For a scene. Everyone is ensnared in this tangled web of criminality in one form or another. Even Wes’ attempt to escape, via joining the military, only leave him more warped and broken in different, though similar ways. 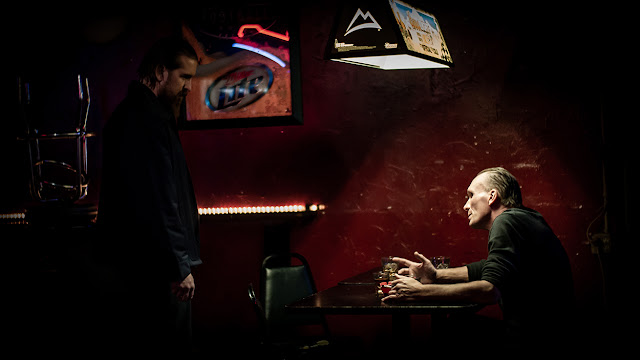 The problem is, it’s all a veneer and Out of Exile winds up an overly familiar paint-by-numbers affair. Gabe agrees to one last job, even though he has a bad feeling about it. The boss, Whitman Rader (Peter Greene), obviously doesn’t have their back as much as he says. Marcos is the doomed sympathetic character who only wants to provide for his family. That never goes well. Wes is the wild card, which if you couldn’t tell by his chaotic behavior, the tattoo written in felt pen on his neck that says “WAR” clues you in. Even down to Gabe wiping a steam-covered mirror to stare into the bleakness of his own heart, you’ve seen this all many times before.

The back third of the film picks up as it largely jettisons the subplots that clutter the narrative. Everything with the FBI is terminally uninteresting, including the brief cameo by legendary wrestler Jake “The Snake” Roberts, so abandoning that smooths things out. The same goes for an unnecessary thread with a crew of Mexican gangsters, most of the family stuff, and a few others. There’s potential in the final act, but already overlong at 107 minutes, it’s too little too late. 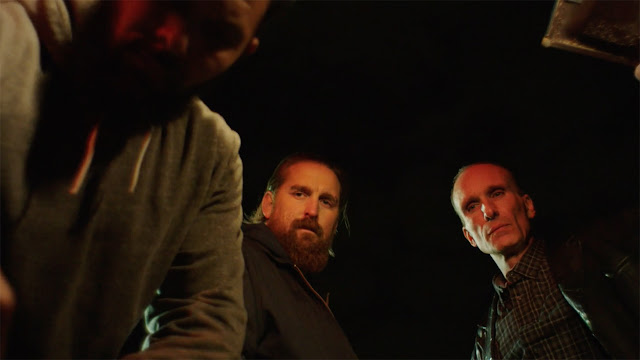 Hampton has a solid presence and menace, but not necessarily the charisma to be the lead and carry a movie at this stage. If we go back to Den of Thieves, he could be a member of Gerard Butler’s crew, but not Gerard Butler himself. Though there is a weathered, downtrodden resemblance. The script setting him up as the stoic silent type doesn’t do him any favors. Greene smirks and slimes his way through his role in the way he does so well. Everyone else is just kind of there; fine, but nothing notable. (Dawn’s scumbag boyfriend does have a laughable drawn-on anarchy symbol tattoo behind one ear, so that’s fun.)

There’s ambition in Out of Exile, and it has something on its mind, which is admirable. But ultimately the lo-fi, no-frills DTV-style crime thriller (it presents as an action movie, but even in the heist scenes, the action remains minimal) has big ideas hampered by threadbare execution, and there’s unfortunately not much to recommend. [Grade: C]