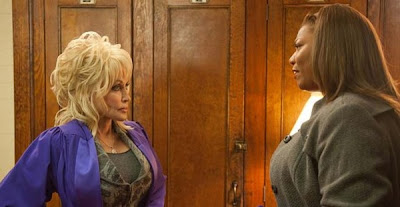 I certainly didn’t intend to see “Joyful Noise”. You know the one I mean, the uplifting, feel good, everybody hug, Dolly Parton/Queen Latifah joint about competitive gospel choirs. The one where you see the commercials and think, who the hell is going to watch that? Apparently I will. Like I said, it was unintentional. I went downtown to attend a screening of “Contraband”, which is much more the speed of everyone who reads this site. That was the plan. But here’s the problem, I’m an idiot. I didn’t bother to double check what theater “Contraband” was showing at, and I just went to the one where the vast majority of local screenings are held. Like usual I wandered up to the obvious PR firm intern standing at the door with a list, told her I was here for the screening, wrote down my name and who I write for, and headed for the appropriate theater. Security didn’t even wand me.


I’m perpetually early for everything in my life, so I sat there reading my book as the theater gradually filled up. For a moment I was vaguely curious why someone was setting up an organ in front of the theater. However, it wasn’t until the full, and I mean full gospel choir lined up and sang a few numbers that it dawned on me, holy shit, I’m in the wrong place. Or at least I wasn’t where I intended to be, perhaps I was in the exact right place I should be. By now it was too late to make “Contraband”, and I briefly considered leaving, but, you know, what the hell?

“Joyful Noise” is something. I won’t say a good thing, I won’t say a bad thing, but it is a thing to behold. Here’s the best way I’ve come up with to describe the movie. “Joyful Noise” is like an episode of “Glee” knocked up an Afterschool Special, and a bat-shit-crazy uncle raised that child. Part of it is the most watered down tripe you’ve ever witnessed, like they came up with the plot in fifteen minutes over too many shots. There’s a hard-luck town in Georgia where the only thing they have going for them is the church choir. Everyone’s got troubles, but even the homeless love the choir. Within the choir there’s a rivalry between Gigi Sparrow (Parton, who is looking like a catfish in a blonde wig) and Vi Rose Hill (Latifah). Gigi has a grandson, Randy (Jeremy Johnson). He’s troubled in a “Cosby Show” kind of way. Vi Rose has a daughter, Olivia (Keke Palmer). Those crazy kids love each other. Gigi and Vi Rose don’t approve. Stir in a bunch of musical numbers, and you can imagine the rest, at least as far as the story goes.

What you can’t imagine is exactly how ludicrous everything else in this fucking movie is. Parton isn’t in “Joyful Noise” quite as much as advertised. She mostly pops in to look freaky and drop bits of down-home wisdom, like how there’s always free cheese in the mousetrap, but the mice there ain’t happy, and “God gives you daughters so you mama can say I told you so.” It’s like watching her meltdown on screen. At one point there is a child with Asperger’s Syndrome crying and screaming that he hates god. There’s the weakest, but most hilarious fight scene you’ve ever seen between Randy and his main rival for Olivia’s affections, a tough guy who is about as threatening as the back-up dancers from Michael Jackson’s “Bad” video. Seriously, it’s like a little girl slap fight. They’re on the verge of settling their differences through angry interpretive dance. And don’t even get me started on the “choir gets funky” montage.

For all the mayhem and what the fuck moments, there are three true peaks in “Joyful Noise”. First is when Gigi and Vi Rose get into a fight in a diner. Parton chucks rolls at Latifah while screaming. Latifah mocks Parton’s questionable plastic surgery choices, then puts her in a headlock while urging a patron to film the incident with his phone. The second is when Vi Rose gives a speech that is basically “fuck the kids, let’s crush them”. And the third is a minor point, something that shouldn’t really be in the movie at all, but a dude gets fucked to death. Let me repeat that. A guy gets fucked to death. Watching “Joyful Noise”, I felt like something deep down inside me snapped, like I was having some sort of psychotic break and would never be able to view the world in quite the same way ever again.

At one point I became convinced that I had in fact died, and that I was trapped in some sort of purgatory—not quite hell, but close—that I couldn’t escape from, because “Joyful Noise” just won’t end. For some reason this movie is 117 minutes long, and it’s a clunky, uneven 117 minutes. At times it feels like they didn’t have an editor. It goes on and on and on, and it sags for a moment in the middle. You think the crazy is long gone, you think it is becoming another stale Lifetime rip off, but then, bam, crazy comes roaring back for a triumphant encore.

Idiotic plot and nonexistent manufactured conflict are just two of the problems with “Joyful Noise”. Everyone says Randy is bad news despite the fact that all he does is help an autistic boy play piano and get the choir to sing pop songs. He’s trouble in a Hallmark Channel sense. I don’t feel like I can say that you should see this—it is shoddily made, dumb as a pile of rocks, and questionably acted—but part of me feels like there is a certain faction of you out there that will appreciate this for being an insane piece of modern cinema. This is half tired retread, some of the stupidest shit you’ve ever seen, half insane crazy nonsense. It makes me wish I did drugs. Lots of drugs. Hard drugs.
Posted by Brent McKnight at 3:40 PM