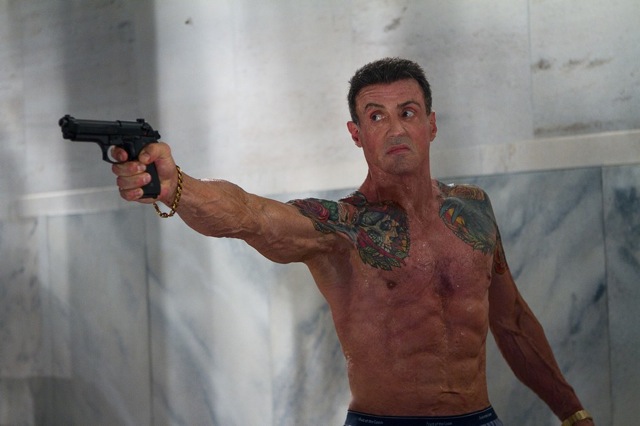 As James “Jimmy Bobo” Bonomo (Sylvester Stallone) says in Walter Hill’s “Bullet to the Head”, “Guns don’t kill people.” Jimmy Bobo, however, most certainly does. With guns, knives, cars, bombs, his hands, walls, even an apple, he kills many, many people. Often at the drop of a hat. This wanton disregard for human life is pretty much the point of the whole movie, and when Hill lets his protagonist out to play, is when “Bullet to the Head” is at its best. The rest of the time, when they try to insert story or character—or to paraphrase one viewer, any time there are words—you run into problems.

Hill is responsible for some of the best tough guy action films of the 70s and 80s. Films like “The Warriors”, “Southern Comfort”, and “Streets of Fire” rate among my personal favorites. Even his comedic outings like “48 Hours” and “Brewster’s Millions” still retain that rough edge. “Bullet to the Head” feels likes it’s trying to find a middle ground between these two sides of Hill’s cinematic personality, but never delivers on either front. The dirty, grimy setting of the New Orleans underworld, full of crooks, killers, and corrupt cops, is a great backdrop for this kind of story, but plays out more like a cartoon.

Professional hitman Jimmy Bobo and his sidekick, the new-to-town cop, Taylor Kwon (Sung Kang, “Fast Five”), who has a black and white sense of morality, develop this instant repartee as if they’ve been acquainted for years. Develop is the wrong word. They’re given their back and forth, which is never earned, and though you’re supposed to view it as quick, witty banter, it’s clumsy, and listening to Stallone try to be hip and cool is painful.

The story is simple, or should be. Jimmy Bobo (it hasn’t stopped making me laugh yet) and his partner Louis (John Seda) kill a guy for money. When they try to collect what is owed them, they’re betrayed, Louis is killed, and the stage is set for revenge. Easy, right? Then Kwon shows up, looking to solve the murder Jimmy and Louis pulled, and the two form an uneasy, unlikely alliance as they search for the responsible party. If left like that, “Bullet to the Head” would have been a perfectly serviceable old school story of violent retribution, one full of tough guys being tough guys.

Even with its problems, “Bullet to the Head” remains passable. It’s been a while since Hill’s last film, and anything he delivers is worth celebrating. This isn’t the style of action movie that usually makes it to theaters anymore, and it’s a style I dearly love. There are no Michael Bay-scale car chases, no robots, no massive set pieces, and you’re well aware that Stallone’s presence is the only thing that saved this from being dumped on the direct-to-video market. “Bullet” is Stallone doing what he does best, play a goofball tough guy with a heart of gold. Except for the occasional murder, he’s really just a big old teddy bear.

But Stallone’s not at his best here, or at least the material and the support structure around him aren’t up to par. One thing I want to get out of the way is that it’s really, really difficult to take a characters named Jimmy Bobo seriously. It’s a ridiculous moniker, one that they insist on using repeatedly throughout “Bullet to the Head”. Every time someone utters the nickname you can’t help but picture a deranged orangutan in a party hat.

Unnecessary complications and attempts to make “Bullet to the Head” something more than what it is, ultimately sink the film. The marketing campaign leans on the revenge story, and why isn’t that good enough? Jimmy Bobo has a code, a set of rules to live by, which is an increasingly annoying trait in modern movie criminals. Everyone has a strict policy that, when ignored, leads to trouble. We get that. He also has a liability, I mean a daughter (Sarah Shahi, “Fairly Legal”). She doubles as an awkward love interest for Kwon, who you’ll want to slap after the 50th time he tells Jimmy Bobo, “when this is done, I’m taking you in.” His statement is less and less convincing every time. Stallone can pull off a muscle-bound thug, but Kang is a monochromatic joke.

Keegan (Jason Momoa, “Game of Thrones”, “Conan”) is the main villain. He’s a psychotic mercenary who does what he does more for the thrill than for the cash. Apparently you can’t trust someone who doesn’t value money above all things. A utilitarian antagonist, Keegan only has one note—again, problems arise when there are words—but plays his part well enough. Unfortunately, the convoluted plot has him working for some rich, crooked land developers. These are tissue-paper bad guys, and matter so little that Christian Slater plays one of them. You do get to watch Rambo fight Conan. It doesn’t go down the way you’ve always imagined it—shirtless Stallone versus shirtless Schwarzenegger—but it’s still a fun little moment.

Based on a graphic novel, “Bullet to the Head” is best viewed when you’re in the mood for an R-rated tough guy romp, especially if you’re a fan of that kind of action. Because both feature an aging action icon, and due to the proximity of their releases, you can draw a direct parallel to “The Last Stand”. This may not be a fair comparison. “The Last Stand” is lighter and more stylized, while “Bullet” aims to be a grim portrait of a tough guy. There’s some grit, but not as much as there should be to stand with Hill’s previous films, and in the end, Kim Jee-woon’s offering is the better movie.
Posted by Brent McKnight at 7:18 PM