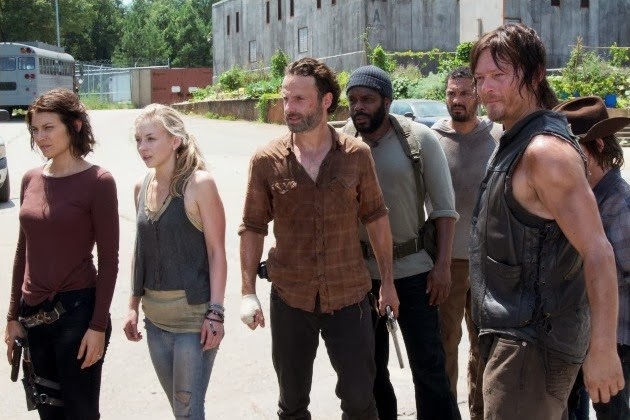 The last two weeks on AMC’s The WalkingDead have been spent catching up with that nefarious villain from season three, the Governor (David Morrissey). They’ve essentially been two weeks worth of him pretending to change while we build up toward this week’s mid-season finale, “Too Far Gone,” and the inevitable conflict between the Governor and the survivors at the prison. When we left him, the Governor was drawing a bead on Michonne (Danai Gurira) and Hershel (Scott Wilson). How does this situation evolve, where does that go, and who is going to die? Read on to find out the answers to all of these and more.

This week picks up with the Governor doing what he does best, manipulating people who have put their trust in him, who have been blinded by his smooth talk and lies spun about Rick (Andrew Lincoln) and the rest of his crew. He conveniently glosses over all of the events at Woodbury, and just in cast his new crew doesn’t realize he’s serious, he’s got a plan, a plan that involves using his two hostages, Hershel and Michonne, as leverage to force Rick and company out. No matter how he tries to sell it, how much he massages the truth, this course of action doesn’t sit well with many of his new followers, though it seems to suit Mitch (Kirk Acevedo), the resident tank driver, just fine.

Hershel, the eternal diplomat, tries to reach an accord between the sides, though Michonne doesn’t help matters much by threatening to kill the man she scoured the countryside looking for. Is he, as he claims, just trying to protect what he cares about, regardless of the cost, or is this the sign of a maniacal fascist out for power and the destruction of his enemies? You know the answer to this.

Back at the prison, they’re still recovering from the plague. Glenn (Steven Yeun) is sick, but still recovering, and Maggie (Lauren Cohan) dotes on him. Rick has finally told Daryl (Norman Reedus) about banishing Carol, and he’s having a shit fit, as you would expect. The two were inexplicably close, even though we were never able to get a clear read on the nature of their relationship. Bob (Lawrence Gilliard Jr.) and Sasha (Sonequa Martin-Green) have a moment, and when Tyreese (Chad L. Coleman) shows Rick and Daryl the weird rat-sacrifice-voodoo-monument thing, they think their biggest problem of the day is going to be finding out which one of them is a straight up weirdo. Boy are they in for a surprise.

At the exact moment when Rick and Daryl are going to tell Tyreese that it was Carol that killed his lady friend, boom, explosion, and things go downhill from there. Never mind the spurious logic behind blasting the holy hell out of the place that you want to live, and making a ton of racket to attract every zombie within miles, the Governor and his folk are outside the walls, knocking to be let in.

This is where “Too Far Gone” almost falls into the trap that has plagued The Walking Dead since the beginning. Instead of action, instead of making a decision, they devolve into excessive talk that goes back and forth, but never arrives at any conclusion. Both sides know this is pointless dialogue, and what Rick should be doing is giving his own people time to tool up for battle. While they do that a little, preparing to execute their pre-ordained escape plan, mostly they stand there and watch, as if they can hear what’s going on.

Most of “Too Far Gone” is just biding time before the fireworks start. Rick dillie-dallies, much to Hershel’s delight, with his “we’re not too far gone, we can come back from this,” rhetoric. Finally, the Governor has had enough, and unveils his true colors to his flock by beheading an old, defenseless man. That’s right, the Governor, like the true dick that he is, hacks off Hershel’s head, with Michonne’s sword no less. As much as you expect it and see it coming, you are left a little dumbfounded, especially with the brutal nature of the attack. As you would expect, this is the spark that sets off the proverbial powder keg.

What follows is a full-on shootout, with zombies, reluctant participates on both sides, and lots of devastating emotional reveals, many of them involving children. The Governor’s pseudo-daughter bites the dust after a walker sinks its teeth into her, and the moment is really wasted. What could have been, what should have been, the instant where he truly, irreparably breaks, where the last thing connecting him to his humanity is snatched away, is a throw away moment where he puts a bullet through the head of a small corpse. There’s nothing deeper than that, and it’s too bad since it was tailor made to be more.

“Too Far Gone” does prove that The Walking Dead isn’t going to shy away from putting kids in compromising positions. We’ve see Carl (Chandler Riggs) grow into a hardened warrior, but when Tyreese is in trouble, pinned down, about to get clipped by two of the Governor’s goons, who steps in to pull his ass out of the fire but that grim little blond girl Carol left behind. An adolescent girl totally murders two people without blinking. That’s growing up hard.

And just in case you thought things were getting soft, remember baby Judith? Sure, she’s been pushed to the background for the majority of this season, only seen once in awhile, usually in the arms of someone not even remotely related to her, but they pull her off the bench for one last big kick in the teeth. That’s right, the baby, the baby, dies in “Too Far Gone.” You shouldn’t be too terribly surprised, as she’s been a non-factor for most of her existence, and readers of the comics may recall the particularly mean-spirited way Robert Kirkman excises her from the black and white pages of The Walking Dead. Still, the image of that empty, blood-soaked baby-carrier delivers the blow to the solar plexus it was intended to. Basically, tonight was not a good night to be young on this particular show.

By the end everything lies in ruins. The Governor is dead. The prison is a smoking, zombie-infested pile of rubble. The group has split up, and Rick and Carl stumble, bruised and broken, into the wilderness once again.

Overall this was a strong way to send the show into an extended break. The Walking Dead is at its best when the focus is on the characters, and “Too Far Gone” is more about the people than the zombies, or even the action at the end. The primary concern is how all of these events impact the people on the show. For once the deaths actually mean something, instead of being another faceless new addition, just there to add to the body count.