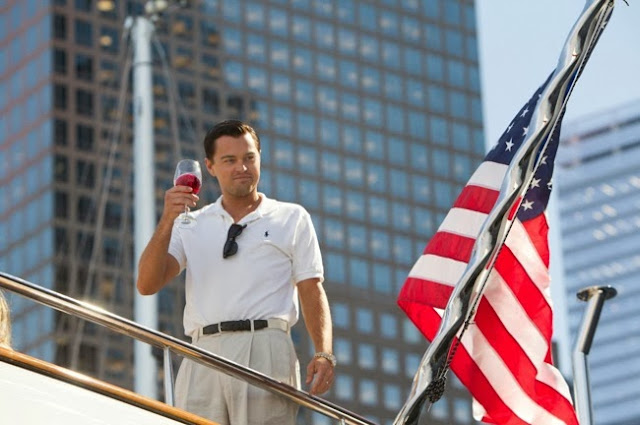 You learn right away what you've gotten yourself into with “The Wolf of Wall Street.” Among the first things director Martin Scorsese shows you are a group of rabid, feral stockbrokers, cranked out of their minds on cocaine, testosterone, and adrenaline, throwing dwarves at a target; and Jordan Belfort (Leonardo DiCaprio) doing blow out of a prostitute’s lady parts. And from there the movie gets crazy.

So you know you’ve walked into something a little bit different. If you expected a straight dramatic examination of the corporate greed and decadence of the 1980s, “The Wolf of Wall Street” may break your mind. This is sharp, bombastic satire with overt political overtones; over the top, crude, crass, and more than anything, an incredible amount of fun. Working from a script by Terence Winter, based on a book by the real Jordan Belfort, Scorsese uses the same schtick as in “Goodfellas,” the first-person protagonist recounting his meteoric rise from nothing to god-like status, only to experience a precipitous fall.

Jordan begins as an earnest, 22-year-old trying to get into the Wall Street game, only to be seduced and corrupted by the like of Mark Hanna (Matthew McConaughey in a brief, but weighty and important role), his spiritual, chest-pumping shaman of greed. Before long Jordan starts his own firm. Using vaguely legal strong-arm sales tactics, he manipulates the market, and plays fanatical religious leader to an ever-growing cult of cash-crazed underlings. Fueled by a constant stream of every drug you can name—and a few you can’t—sex, and money, Jordan’s world becomes a hedonistic wonderland where nothing is taboo and nothing is out of reach. With his caricature right hand man, Donnie Azoff (Jonah Hill), at his side—the proverbial cartoon devil on his shoulder—Jordan can’t lose, at least until he pops up on radar of FBI Agent Patrick Denham (Kyle Chandler), the one-note law-enforcement foil.

As you know from word one, this rocket ship can’t shoot straight up forever, but the trajectory doesn’t flatten out or take a nosedive before reaching insane heights of debauched mayhem. Jordan’s firm, Stratton Oakmont—there’s a lion on the crest—is less an group of businessmen than it is a decadent tribe, blindly following their chief to great riches and ruin. You don’t necessarily expect it, but you’re glad for lines like, “Smoke crack with me, bro.”

An in depth look at the culture of greed, “The Wolf of Wall Street” follows unchecked wealth and power to a mad, logical end. Jordan is married at first, and his wife (Cristin Miloti), and her conscience, is what keeps him tethered to reality, at least for a time. She also inadvertently gives him the inspiration for his biggest scheme, but that was an accident. Even she is unable to combat Jordan’s insatiable lust and greed and appetites. So under the spell of green, he can’t help but use her up, break her, and leave her in his wake like he does so many others. And with her goes his last vestige of humanity, left to snort, fuck, and scam his way to oblivion.

People have been talking about DiCaprio’s performance, and rightly so. In the persona of Jordan he goes for it with such livid gusto, such a larger than life not-giving-a-damn bravado, that he’s impossible not to watch. A horrible human being in every way, you don’t necessarily root for him as much as you wait to see what he’s going to do next. Within this wild, raucous enthusiasm, it’s easy to overlook the nuance and subtle skill that DiCaprio brings to the role. A scene where Jordan has ingested one too many slow acting Quaaludes, and as to get home to prevent a potential disaster, illustrates just how on his game he is. Jordan loses damn near every last bit physical over his body, crawling, practically oozing, to his car. An impressive feat of physical acting, you realize how in control he has to be to play out of control. In one long take he inches his frame down stairs, across concrete, and into his Lamborghini. As hilarious as this moment is, and you’re cracking up the entire time, you have to marvel at his performance.

Like it’s protagonist, “The Wolf of Wall Street” is wild, sprawling and out of control. Clocking in at a very full, very manic 180-minutes, it is a massive beast of a thing, propped up by fantastic supporting players. Hill’s Azoff is perfect as an archetype Jew attempting to pass as something else, a layer of meanness lurking under good-time-guy cover. Rob Reiner is Jordan’s middle-class accountant father, the so-called Equalizer, who attempts to reign in his son. From Jon Bernthal as a pill-dealing money-laundering pal, to P.J. Byrne’s Rugrat, everyone has bought into Scorsese’s jacked-up madness.

As good as “The Wolf of Wall Street” is—slick and fast-moving—eventually it hits you that this is indeed a three hour movie. Apparently the first cut was four and a half, so there’s that. It’s not like there are many scenes that could be removed. A couple drive home the same point, but removing them would still alter the landscape of the film. The scenes on their own are great, but you get to a point where you feel that many of them could be a minute or two shorter. Watching comedic heads like Rob Reiner and Jonah Hill go at each other is fantastic, but by the end they’re treading the same territory over and over again, and it’s time to move on. DiCaprio gives numerous, lengthy speeches to rally his troops, to whip them into a moneymaking frenzy. These, too, are wonderful, but after you experience a few, you’re ready to move on and see what comes next. In the big picture, this is a minor quibble. As a three-hour movie, “The Wolf of Wall Street” is great, at two-and-a-half-hours, it might be damn near perfect. As it is, this ranks with Scorsese’s best, and that fact alone speaks volumes.
Posted by Brent McKnight at 10:37 AM