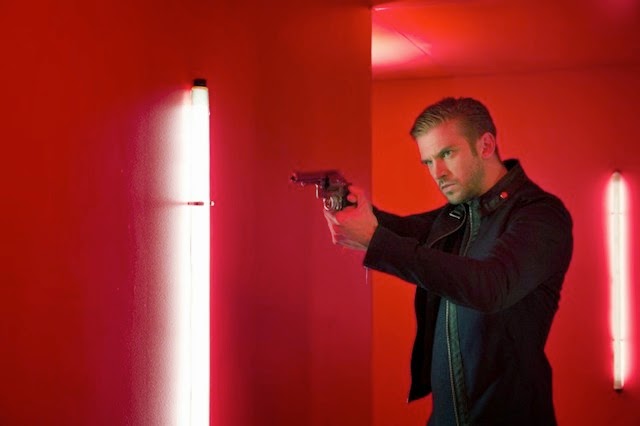 Director Adam Wingard and writer Simon Barrett are the duo responsible for last year’s indie horror hit “You’re Next.” While it doesn’t reinvent the wheel, it’s a super fun home invasion yarn, and full of solid scares and action (it’s hard to ever go completely wrong whenever you have dudes in creepy animal masks breaking into houses and terrorizing folks). When their latest collaboration, “The Guest,” starts out, you think you’re in for a similar ride. But that’s not how it all goes down, and what they’ve crafted here is a dark, entertaining thriller that’s familiar but still inventive in all the right places.

The first act is a solid, stranger comes to town narrative. The Peterson family—father Spencer (Leland Orser), mother Laura (Sheila Kelley), son Luke (Brendan Meyer), and daughter Anna (Maika Monroe)—recently lost their oldest son Caleb, a soldier who was killed in action in Afghanistan. They’re understandably devastated, and when David Collins (Dan Stevens) shows up on their doorstep, claiming to be Caleb’s friend from the service who promised his dying buddy that he would check in on his beloved family, they welcome him into their home with open arms, despite the fact that he brings up a painful array of feelings and emotions.

As is the pattern in stories like this, David is too good to be true; flawlessly handsome, overly polite, and willing to help out in any way he can. This includes everything from picking Luke up at school, to “taking care” of the bullies who have been picking on the kid in a particularly awesome, brutal fight scene. That’s when you get your first glimpse of who he really is. In fact, the first act of “The Guest” is little more than David being a total badass, pitching in and helping damsels, and others, in distress. And Stevens fits perfectly in the role, balancing his aww shucks style down home manners and humility with the lurking darkness and flashpoint propensity for swift violence. It’s definitely a striking change from his turn on “Downton Abbey.” 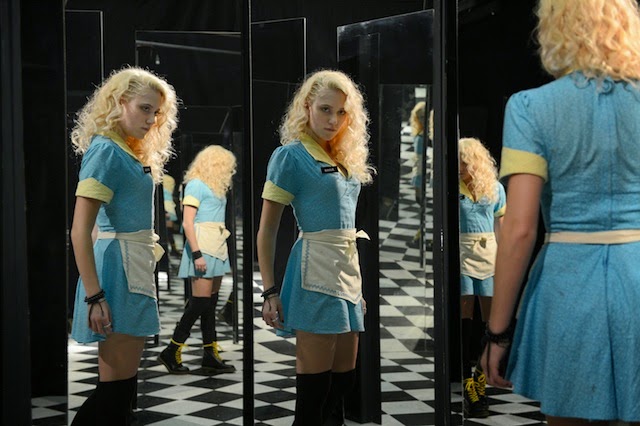 Still, there’s something not right about him. He’s too perfect in a way that’s off putting, especially to Anna, and the way Wingard sets the stage, you know there are secrets he’s not telling. This feels like John Carpenter working at the height of his game in the late 1970s or early 1980s in the way he creates tension with his camera work, editing, and Steve Moore’s (from the band Zombi, who, the first time I heard more than ten years ago, I wanted to score movies) throbbing synth-heavy score.

And as tense and violent as “The Guest” is throughout, it’s also darkly funny, gleefully so. It strikes an unusual, but pleasant, balance between the pressure and humor and thrills. It finds a way to be cheesy and off the wall and chilling all at the same, and fires on all cylinders, hitting all of the right notes that a movie like this needs to find in order to be successful.

Up to a point you’re on board, enjoying yourself immensely, but all things considered, “The Guest,” though solid, isn’t doing anything groundbreaking, operating very much within certain throwback genre constraints. But then it takes a turn that changes everything. This isn’t quite the monumental genre tweak of say “Cabin in the Woods,” but it’s definitely in that same ballpark in how it shifts the entire landscape of the film with a single moment. You expect a reveal to come, but not in the way it does, and certainly not the one that you get. 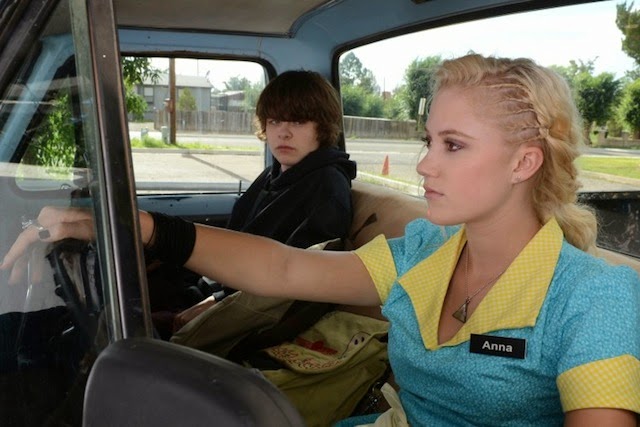 While Stevens is obviously doing the bulk of the work, the supporting players carry their weight as well. Orser and Kelly do what is asked of them as the harried parents, not only trying to keep their family together, but maintain their own composure, without always winning that particular battle. Meyer is solid as the son, dealing with enough on his own that he doesn’t need the added torment he receives on every level at school. Watching David dismantle the jocks that persecute him, his reaction is the perfect natural blend of revulsion and this-is-so-damn-awesome. You can’t help but take at least a little pleasure in seeing that. Lance Reddick turns up playing that stiff government official that, after turns on “The Wire” and “Fringe,” he can do in his sleep.

It’s really Monroe, however, who holds her own best with Stevens. Initially, you chalk her suspicions up to her recent trauma and the youthful rebel stance she adopts, but it is really her whose actions push the drama and the narrative forward. Her world is the one David infiltrates most completely, and she, more than anyone else, is the hero and protagonist of this story.

“The Guest” is sure to elicit a similar immediate reaction as “You’re Next,” but this offering from Wingard and Barrett, while largely operating within very specific genre confines, does more with the form than their previous film. Without ever completely breaking out of mold, they push the boundaries much more than before, making “The Guest” feel fresher and less familiar. And it doesn’t hurt matters that the constraints they work in here are less worn and tired than the home invasion, and this is more of a throwback, an homage, than “You’re Next.”

However you break it down, “The Guest” is still definitely worth your time and money. It’s a fun, taut thriller that hits where it needs to, keeps up the pace throughout, and should prove more than satisfactory, especially for those of you with a proclivity towards the low-budget exploitation fare of a bygone era.

Posted by Brent McKnight at 2:43 PM