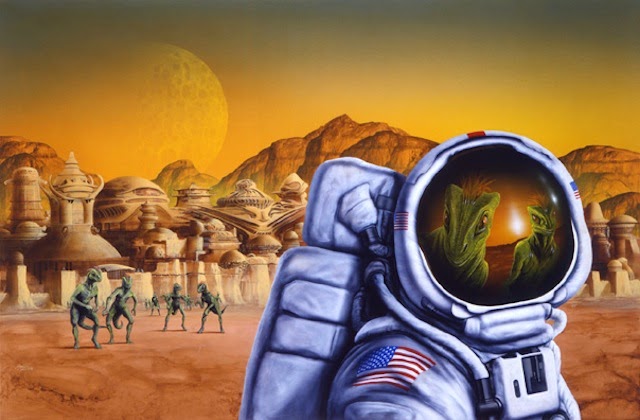 Even if the name Jim Burns doesn’t immediately ring any bells, odds are that, as an avid consumer of science fiction over the previous decades, you’ve encountered more of his art than you know. He has worked on movies, games, and books for longer than many of us have been alive, and his shelves at home are speckled with trophies that include multiple Hugo Awards and numerous British Science Fiction Awards, among others. His gorgeous new book, The Art of Jim Burns: Hyperluminal is scheduled to hit bookstores (both brick and mortar as well as digital) at the end of this month and collects may of his paintings and covers, both that you’ve seen and that you haven’t.

Burns is probably most known for his concept work on Ridley Scott’s Blade Runner. He’s largely responsible for the look of the flying cars that, while modern, still maintain some classic lines. (In addition to that, he also did some work for Scott on his adaptation of Frank Herbert’s Dune, a film that, sadly, never came to fruition.) As author Joe Haldeman (The Forever War) says in his introduction, while Burns has all the technical bells and whistles—clean lines, good composition, unique color work—it’s this ability to take everyday objects and give them a “science fictionalization,” to take the mundane and make it something fantastic and otherworldly, many infused with a sense of eroticism and sensuality.

The writers he has worked with over the years reads like who’s who of modern sci-fi luminaries. This is a list that includes, but is not limited to, Greg Bear, Neil Gaiman, Peter F. Hamilton, Timothy Zahn, Orson Scott Card, Terry Pratchett, and Anne McCaffrey. There are way too many to list here. I told you that you were more than likely familiar with his work, at least in a passing, cursory way.

The pieces in Hyperluminal cut across the spectrum of his work. There are book covers, of course, that’s the world where he is most widely recognized, as well as concept art and works that are part of his own private collection. Burns doesn’t just do work in the realms where he is most celebrated, but he has a large number of standalone pieces that are just scenarios his own vivid imagination developed without any outside push or instruction. 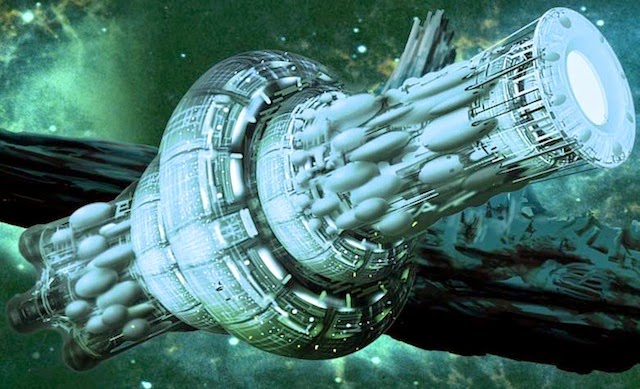 Woven throughout the slick, brilliant reproductions of his paintings, Burns himself provides something of a guided tour of the work contained within the cover. You get the various nuts and bolts, but it also offers a glimpse into the process that goes into things like sci-fi book covers. For instance, you learn how he came to work with a particular writer, what they wanted out of his work, how they went back and forth, and show off the finished product. This is the kind of vantage point that you don’t often run across, but is also one that Burns is qualified like few others to unveil.

The latter portion of the book, probably the final quarter or so, does trade in the sci-fi trappings in favor of a more fantasy bent. While the quality of the art remains consistent, on a personal level, I’m simply not as much of a fan of fairies and orcs and shit like that. Here the suggestive and sexually charged elements are on full display, there are lots of busty elfin women in revealing tops.

In the final section of the book, called “Encounters with Otherness,” Burns digs into his evolving fascinations and styles. As he ages, he says his work tends to inhabit a new “dark place of the soul,” looking for new avenues and areas to explore with his work. This segment has more macabre, surreal vibe, like a field of human bones surrounding a cathedral, and pieces that combine elements of various mythologies from around the world.

If any of this sounds interesting, The Art of Jim Burns: Hyperluminal is well worth taking a look at. It’s yet another visually stunning, well put together offering from Titan Books, one that offers a new, different perspective on the a piece of the science fiction genre that, while we all recognize is important, too often goes overlooked by more general audiences. 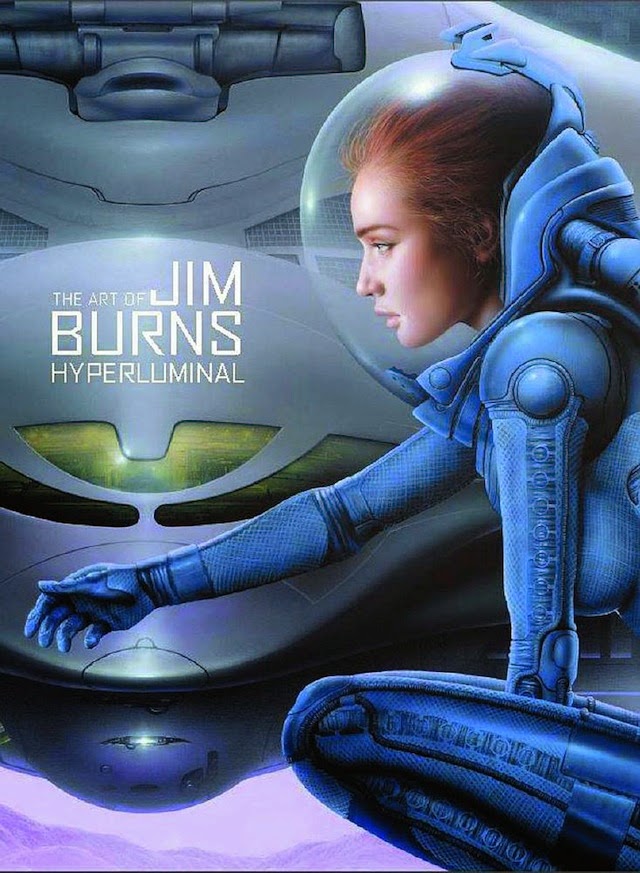