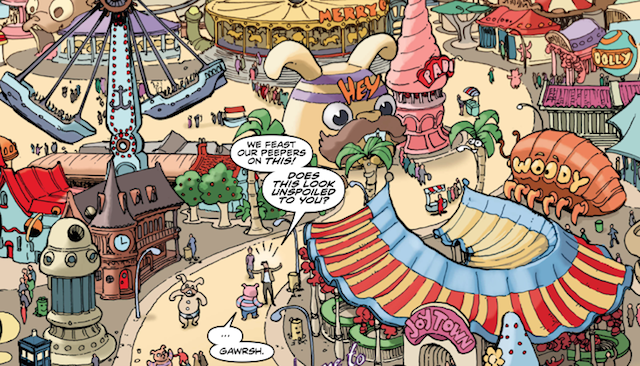 If you’re an alien lord with two hearts in your body, the last of your kind, and you have the ability to travel through space and time, what’s the first thing you do when you make a new friend? That’s right, you take them someplace nice. And that’s exactly what the Doctor does in issue #2 of Titan Comics’ young series Doctor Who: The Eleventh Doctor, or at least that’s what he tries to do.

Now that he has acquired a fresh travelling companion, laid off librarian Alice Obiefune, the two-dimensional representation of Matt Smith’s Doctor wants to do something fun with her, you know, ease her into her new, alien in every sense of the word, lifestyle. She didn’t bat an eye seeing a weird, emotion-sucking dog bounding through London, nor question the bigger-on-the-inside physics of the TARDIS, but still, best to take things slow in these situations, lest you scare someone off.

So the Doctor and Alice wind up on the once pristine world of Rokhandi, but things have changed just the slightest wee bit since he was here last. Instead of the most gorgeous, sparkling, protected natural environment you can imagine, there’s now a gaudy, plastic, toxic waste spewing theme park full of mindless tourists where everyone is happy every second of every day. It’s horrible. As you can imagine, this surface pleasure and contentment mask something dark and sinister, even more so than a happy toxic mine, and it’s up to Alice and the Doctor to figure it out, and discern what role vomit plays in the whole thing.

This incarnation of the Time Lord is essentially a child. He goes from manic and bouncing off the walls one moment to pouting and dragging his feet the next. More than a companion, Alice serves as a caretaker, a babysitter who must contend with his fluctuating moods, rein him in when he gets too frantic, and cheer him up when he is sullen. This definitely captures the feel and aesthetic of Smith’s portrayal of the character, so if you’re missing him, these comics may help soothe those still fresh wounds. And again, she proves herself a quick study when it comes to this balancing act as well, and is not afraid to handle her business and take steps to protect herself and the Doctor when necessary. 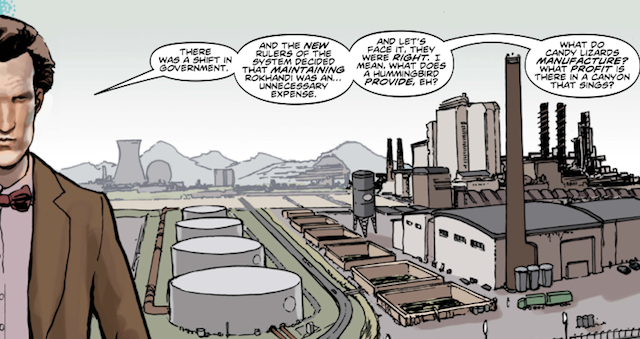 Given the altered state of Rokhandi now versus what it once was, there is a heavy, obvious conservationist message here. Writer Al Ewing doesn’t even attempt to hide it, work it into the subtext, or anything so subtle, it’s all up in your face as the Doctor orates loudly on the matter. That’s all well and good, it’s a fine topic get passionate about, but it’s nothing that you haven’t heard before, and comes across as such. Why should you listen this particular time when this exact thing has been said before? All history needs is an eye-blink and everything can change that fast.

More than its counterpart, Doctor Who: The Tenth Doctor, which, as you likely surmised, follows a version of David Tennant’s Time Lord, this is more of a single, limited scope story. The other title is like reading chapters of a larger arc, while this, at least thus far into the run, is more akin to watching an episode of the long running BBC TV show. There is definitely something larger going on, which becomes especially clear at the conclusion when there are seeds of a greater narrative, but this is a much more self-contained tale.

We’re only two issues into the run, and while they have been fun enough, especially for those of you who are still very much missing Smith’s Eleventh Doctor, you have to hope that the creative team has grander plans in store. It’s not that they’re bad, but if they continue like this for too much longer, it may be difficult to maintain your level of interest. The Tenth Doctor, on the other hand, is more engaging on that front. The more serialized nature of the story they’re telling over there is something that will keep you metaphorically tuning in month to month, and that’s something The Eleventh Doctor might want to look into before long. 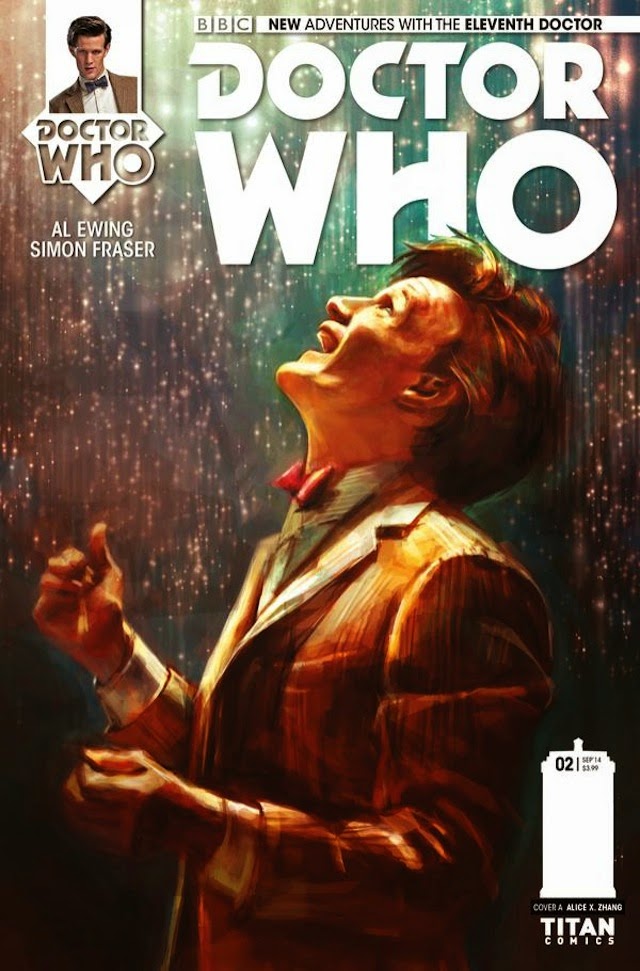 Posted by Brent McKnight at 6:55 PM

I've been reading your stuff online and I can tell you're pretty into Doctor Who stuff. Can you drop me a line - I've got something you may enjoy.