'Force Majeure' Movie Review: A Biting Look At The Person You Become 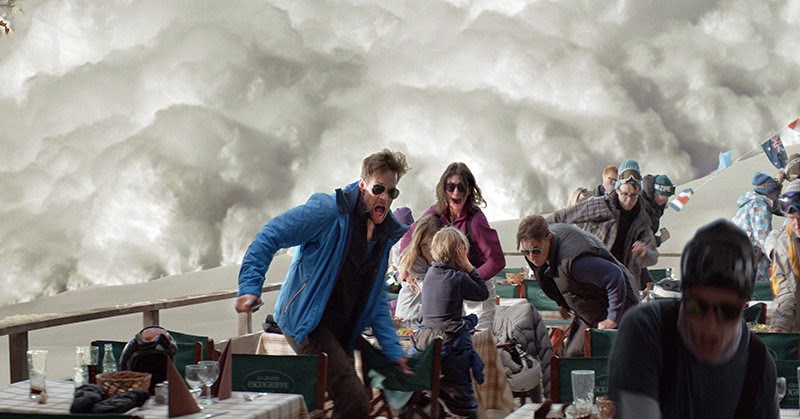 Force Majeure, Sweden’s entry into the Best Foreign Language Film Oscar race, is a disaster thriller where actual disaster is entirely secondary and serves as a launching pad for the rest of the film. A biting, and bitingly funny, look at marriage, family, love, and coming to terms with the person you turned out to be, this is getting some serious buzz when it comes to end of the year awards, and rightfully so.

Tomas (Johannes Bah Kunke), Ebba (Lisa Loven Kongsli), and their two young kids embark on an idyllic family ski vacation for some good old family bonding and some quality time with Tomas, who is so consumed by work he can hardly stop checking his phone. While eating lunch on a resort terrace with a spectacular view there’s an avalanche. But don’t worry, it’s the kind the ski resort sets off intentionally for maintenance and safety reasons. Only this one isn’t so controlled. As the wall of snow bears down on the restaurant, Tomas tucks tail and runs, leaving Ebba and the kids to fend for themselves.

Fortunately everyone is fine, but what turns out to be relatively minor event has a cascading effect on the family. Tomas goes on as if everything is normal and perfect—this is obviously a problem that extends far beyond this one family get away—but Ebba and the kids may never look at him the same way again. He’s the one who is supposed to protect them, right, to sacrifice himself for his kids? Ebba lets it go as long as she can, but this inciting incident brings all kinds of lingering domestic issues bubbling to the surface. It’s a delayed shock, like she can’t even believe it herself what happened, but before long, Tomas is scrambling to reclaim his married life, lamenting the man he has become.

First he admits to nothing, then he pushes it off as no big deal and downplays the significance. He even brings in their friends Mats (Game of Thrones’ Kristopher Hivju) and Fanny (Fanni Metelius), which leads to one of the most delightfully awkward dinner parties of all time. You have to force a laugh, but only so you don’t cringe. Before long, he’s a burbling wreck, breaking down in front the creepy hotel employee who only wants to smoke a cigarette in peace but keeps getting ambushed by this dysfunctional couple. It’s to the point where you’re not sure if Tomas can ever make his way back.

Writer/director Ruben Ostlund isn’t afraid to linger in one place in order to make his point crystal clear, which, depending on your stance, is either a boon or a hindrance. But constructed with sharp, almost Kubrickian precision, every choice in Force Majeure is deliberate, and the script takes its delicious, needling time to ever so slowly stick in the knife and twist the blade. It’s the kind of cutting satire that is so razor-edged you don’t initially see how deep it cuts and how permanent it scars.

This is a deceptively simple premise, but one with major ramifications. It shakes Tomas and Ebba’s marriage and relationship with their kids to its very foundations. Their drama even starts to infect Mats and Fanny like a disease, leading to sleepless nights and fights on their end as well.

Ostslund builds tension in what is realistically the story of a troubled relationship in the way you would  tense thriller. The stakes may not be life and death in a literal sense, but the continued survival of this family unit certainly hangs in the balance. And the vibrating string score, a short, sharp refrain that punctuates the film, ratchets up the pressure as Ebba’s fury builds and Tomas’ shame takes over.

Spectacular sweeping wide shots of the picturesque mountain resort cut in closer and closer until you get a face full of this family’s most private, intimate moments, deconstructing the façade of this apparently perfect middle class family in this pristine environment. Director of Photography Fredrik Wenzel is as important a part of this film as any other player. Ostlund, who it should be noted, started his career making ski films, and puts those skills to good use here, and the result is a gorgeous movie with a size and scope that belies the intensely personal contents of the story. It’s difficult to make this kind of specific, bourgeois story important and relatable to everyone—if you say you find Tomas and Ebba intolerable and unpleasant, I wouldn’t argue—but this scale gives it a grander feel that helps in that regard. This is a small tale that plays big.

Force Majeure may run a bit long for some, and the focus does wander off for a short time in the middle—there’s one scene that’s best described as a screaming rave that is the most out of place moment in the movie—but this is a sharp dissection of communication in relationships, family, marriage, and the dealing with uncomfortable subjects. The film drives home that you can never truly know how you’ll react in a given situation without actually being there, which is true Tomas’ case as well as Ebba’s, but you can be damn sure that how you act will have repercussions.