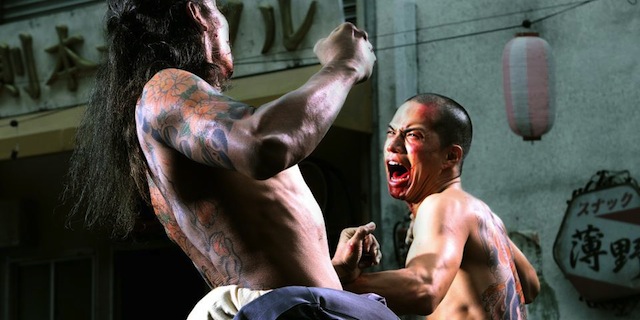 If I told you any Japanese filmmaker made a yakuza vampire movie, most of you would probably guess it came from Takashi Miike. And you would be right. The prolific auteur of mayhem’s latest, YakuzaApocalypse, is coming, and just dropped an insane new trailer. Check it out below.

Making the festival rounds and getting astonishingly good reviews (including at Cannes, where it debuted), Yakuza Apocalypse looks totally bonkers, like as nuts as the description sounds. The official synopsis is bananas and the trailer is even more off the wall:

Fearsome Yakuza boss Kamiura is also a bloodsucking vampire. One day, men arrive from a competing clan and deliver him an ultimatum: Play nice or die. Kamiura refuses and, during a fierce battle, is torn limb from limb. With his dying breath, he passes on his vampire powers to his loyal lieutenant, Kageyama. His first order of business is to avenge his mentor, setting him on a collision course with the seemingly unstoppable foreign syndicate, and take his place as the new Yakuza boss.

Yakuza Apocalypse is actually getting a North American run, too. Instead of reading other people’s reviews, waiting, and wishing we could see this for ourselves, waiting for a domestic release, this hits theaters on October 9. And as if all of this wasn’t enough, it also stars Yayan Ruhian from The Raid and Star Wars: The Force Awakens.

Posted by Brent McKnight at 4:10 PM