When it was released in 1971, the critical response to Robert Altman’s revisionist anti-western, McCabe & Mrs. Miller, was positive, but tempered. Co-star Julie Christie received an Academy Award nomination, celebrated cinematographer Vilmos Zsigmond’s gauzy camerawork earned a BAFTA nomination, and a few other accolades added up. Over the years, however, it’s become recognized as a classic of the American New Wave. A maverick, anti-establishment feature, and the Criterion Collection just released a fantastic new Blu-ray worthy of that elevated status.

Set in Washington State in 1902, in the mountain mining town of Presbyterian Church, a mysterious stranger, gambler John McCabe (Warren Beatty), arrives on the scene with big plans. Helped in no small part by the possibly mistaken idea that he’s a vicious gunfighter, McCabe sets up shop, establishing a small brothel, all while wearing a bearskin coat of epic proportions and regularly downing a shudder-worthy concoction of a double whiskey and raw egg. Enter Julie Christie’s cocky Brit, Constance Miller, who teams up with McCabe to take their whorehouse game to a whole new level, a strategy that works like gangbusters until a big business concern shows up to start a ruckus.

Shot in Vancouver, BC, McCabe & Mrs. Miller toys with and subverts a slew of western tropes and traditions while flat out refusing to fall into others. It plays with the stranger-comes-to-town set-up and runs themes of the self-made-mythos—McCabe neither confirms nor denies his gun-slinging past, leaving the townsfolk to stew and speculate. Rugged northwest mountains replace sparse desert frontiers, and off-kilter humor supplants grim-faced stare downs, an element that feels more at home in the era the film was produced rather than set.

All of Robert Altman’s directorial trademarks are present and accounted for. Improvised and layered dialogue gives scenes a cacophonous, lived-in feel. The hazy photography is like a stunning mythic dream—enhanced here by the Blu-ray’s gorgeous new 4K transfer. Intentional chaos—or at least the surface appearance of disorder—abounds, like in so many of the filmmaker’s best. Then there’s the cherry-on-top of this particular sundae: a slew of Leonard Cohen songs, diaphanous and wistful—it feels like a bard following McCabe through this weathered land.

Altman stocked the cast with his company of regular players—including Rene Auberjonois, Keith Carradine, Shelley Duvall, John Schuck, Bert Remsen, and more. But it’s Beatty and Christie who make McCabe & Mrs. Miller go. Flawed and ambitious and not nearly as clever as the townsfolk think he is—or as clever as he himself thinks he is—McCabe swaggers in. A swagger on the verge of buffoonery, and a swagger Mrs. Miller, putting up her own front, cuts right through. On screen, their chemistry is effortless and undeniable—simultaneously charming, disarming, scheming, wounded, and insecure as they delve into their ill-fated romance.

A different kind of western, McCabe & Mrs. Miller makes the framework its own—an experimental genre exercise seen through an opium dream. With an immersive world and uniquely damaged characters all the more compelling for their imperfections, it’s only gained acclaim over the years, and rightly so. 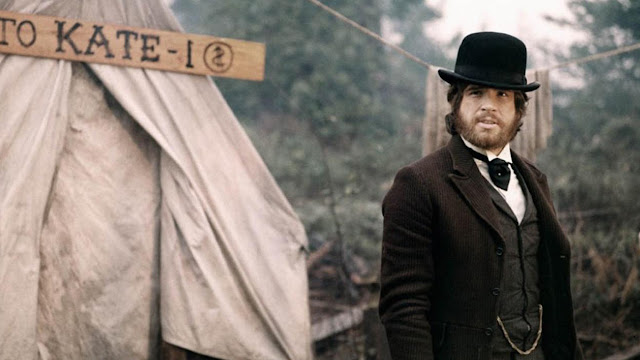