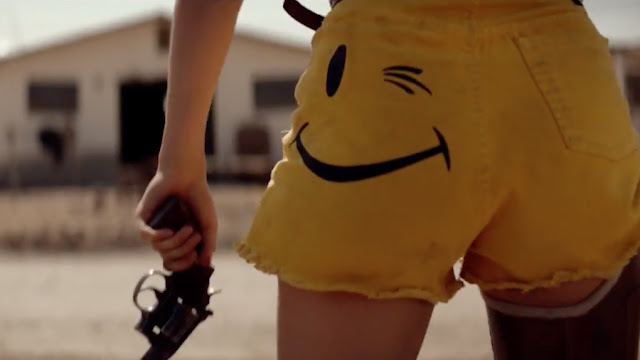 Twee indie Iranian vampire western A Girl WalksHome Alone at Night is a goddamned masterpiece, so, of course, anything writer/director Ana Lily Amirpour does next is high on my list. It doesn’t hurt my feelings at all that her next movie is a weird-as-hell post-apocalyptic cannibal joint. And the latest trailer for The Bad Batch does nothing but sell me.

The Bad Batch looks like the type of movie people are either going to love or hate without a lot of middle ground. Judging from the reactions after the film hit the fall festival circuit last year, that’s definitely the case—responses were mixed to say the least. But all of this falls smack into my wheelhouse.

Spare, sparse, and desolate, I’ve seen The Bad Batch described as a near-silent movie. Then there’s Keanu Reeves as a wasteland cult leader, post-apocalyptic body builders, a protagonist (Suki Waterhouse) missing an arm and a leg, Jason Momoa as a cannibal artist, and a general left-of-center vibe and deliberate tempo. I love all of this.

Here’s a lengthy synopsis for The Bad Batch if you’re in looking for more concrete details:

A girl walks across a cannibal-infested desert at midday…. Ana Lily Amirpour’s highly anticipated follow-up to A Girl Walks Home Alone at Night feints in the direction of sensationalistic horror — and, be forewarned, blood is spilled and limbs are hacked — but The Bad Batch, like Amirpour’s deliciously low-key debut, uses genre as a springboard for high style and social commentary. The aforementioned girl (Suki Waterhouse) is one of thousands of Americans deemed unacceptable to civilized society. While wandering in her desert exile, she is captured by a community of cannibals. She manages to escape, soon ending up at a very different enclave of outcasts. Our heroine is safe here, but still does not quite feel that she has found her tribe.On an excursion beyond the gates of her new shelter, she encounters one of her former cannibal captors (Jason Momoa), who ends up requiring her help. But can she do it without one of them getting slaughtered in the human-eat-human world where savagery is considered central to survival?

New-kid-at-the-table NEON (who’s also handling Colossal) has The Bad Batch slated to drop June 23, which may well provide a much needed respite from tepid PG-13 summer blockbuster fare.
Posted by Brent McKnight at 10:24 AM