'The Survivalist' Trailer Is My Kind Of Post-Apocalyptic Bummer 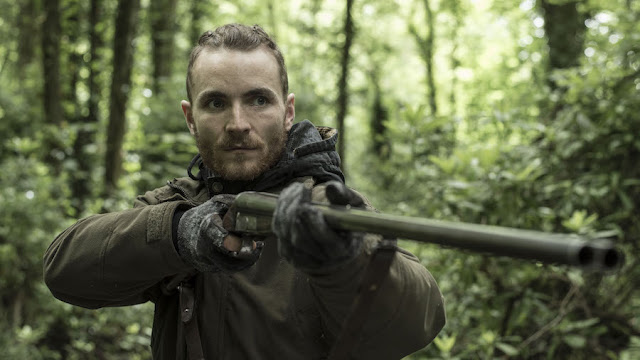 Are most post-apocalyptic joints too light and fluffy? If that’s the case, you may want to watch the trailer for Stephen Fingleton’s debut feature, The Survivalist. This appears to be bleak, depressing shit, but just my speed of bleak and depressing. Check it out after the jump and get ready to curl up in the fetal position and rock the sadness away for the rest of the day.

In my home town, we used to call that dude’s haircut a “meth-cut” because he was either going to try to sell you meth or jack you and sell your stuff, for meth.

As we see in this trailer, the set up for The Survivalist is simple, and calls to mind other recent post-apocalyptic films like Here Alone, not that those two have a trademark on this particular cinematic situation. After an as-yet-unrevealed apocalyptic event, a dude named “Survivalist” lives alone in the woods, foraging, farming what he can, keeping to himself, and protecting what’s his. Then, of course, strangers enter the fray and things take a drastic turn. Sounds like an ideal environment for grim, minimalist, slow-burn horror.

A time of starvation. The Survivalist lives off a small plot of land hidden deep in forest protecting his crop from intruders with his shotgun and improvised traps. But the long years alone have taken their toll on him and he is beginning to lose his grip on reality.

Everything changes when a starving woman called Kathryn and her teenage daughter, Milja, discover the farm. Desperate for shelter, the mother offers up her daughter to spend the night with him in return for bed and board. Overcome with desire, Survivalist breaks his strict code of self-preservation and accepts them into his cabin. As the exchange becomes an uneasy ongoing arrangement, the women plot to get rid of Survivalist and have the farm for themselves. But just as they are about to put their plan into action, an intruder kidnaps Milja and Survivalist risks his life to save her. As he is nursed back to health by the women, food runs short on the farm and they are forced to make desperate decisions to survive.

From what I hear, The Survivalist isn’t quite as desolate and hopeless as it sounds, but it still doesn’t exactly look like a happy-times-pick-me-up. Most of the characters have names like Survivalist, Gaunt Man, Forager, the Snatcher, and Crossbow Raider, none of which sound particularly pleasant.

It’s taken until now for The Survivalist to make its way to theaters. Back in 2015, it showed at the Tribeca Film Festival and received fantastic reviews (The Survivalist currently sits at 96% on Rotten Tomatoes with 25 reviews, which isn’t a bad start).

The film stars Mia Goth, Martin McCann, and Olwen Fouere, and IFC Midnight is finally ready to unleash it into theaters and on VOD starting May 19.
Posted by Brent McKnight at 8:35 AM