Frank Grillo Fights Iko Uwais In This 'Beyond Skyline' Clip 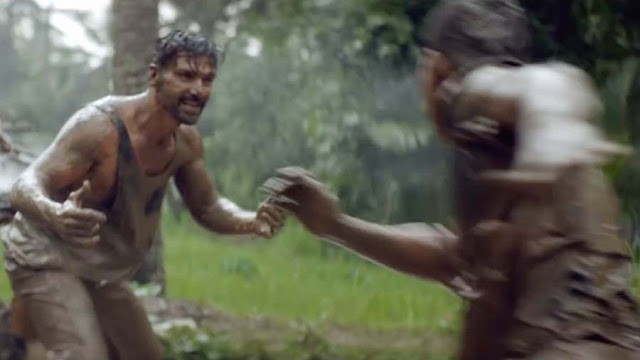 So far, December 15 is shaping up to be the best day of my calendar year. Not only does Star Wars: The Last Jedi open, but Amazon drops the first season of Jean-Claude Van Johnson, and the after-the-fact sci-fi sequel Beyond Skyline also hits. And I might be most excited about that last one. Check out this new clip to see why.

No offense intended to Liam O’Donnell, who directs Beyond Skyline, and also co-wrote 2010’s alien invasion actioner Skyline, but I don’t particularly care for the first movie. This, however, is 100% my shit.

I love the sci-fi angle, but this new clip shows off what I really want to see: badass dudes pummeling the living hell out of each other. In the mud is icing on the cake. When Frank Grillo and Iko Uwais show up in a movie together, there better be at least one scene of them throwing down, even if they wind up on the same side, and that’s precisely what we see here.

And if that’s not enough, there’s a bonus side fight between Pamelyn Chee and Bojana Novakovic. More cinematic fisticuffs of any variety is always a welcome sight. This movie just gets me, because there are also aliens. I mean, come on, this is all of my favorite things in one convenient place.

Here’s a rather in-depth synopsis for those of you interested in plot points beyond punching:

Los Angeles Detective Mark Corley (Frank Grillo, Captain America: The Winter Soldier) thought bailing out his eighteen-year-old son, Trent (Jonny Weston, Taken 3), was the worst part of his day. But on the ride home, the skies above fill with a strange blue light. Within moments, the entire city's population is vacuumed up into a massive alien ship.

In the aftermath, father and son lead a band of survivors to the marina. But when Trent is abducted, Mark relentlessly storms after his son onto the nightmarish warship. As the aliens move across the planet, feeding off the remnants of humanity, the resilient Mark battles through the bizarre environment, uncovering their horrific secrets. Before long, he forges an alliance with an unlikely ally. Together they are able to crash the ship and rescue several abductees. Landing in Southeast Asia, they encounter a highly skilled resistance force, led by the deadly Sua (Iko Uwais, The Raid 1 & 2). In a race against time, these warriors from different sides of the world must unite to save their families and take back the planet.

It also features Yayan Ruhian, a fact I feel like too much of the marketing fails to mention. Just FYI.

Beyond Skyline has been making the rounds of the genre-centric fall film festivals, where it’s received a warm welcome from people I trust on these matters. All of which only makes me want to see it that much more. It’s also opened in a few territories already, though as I said early on, it lands on domestic shores on December 15. So make sure to squeeze at least one viewing between trips to that galaxy far, far away.
Posted by Brent McKnight at 8:33 AM