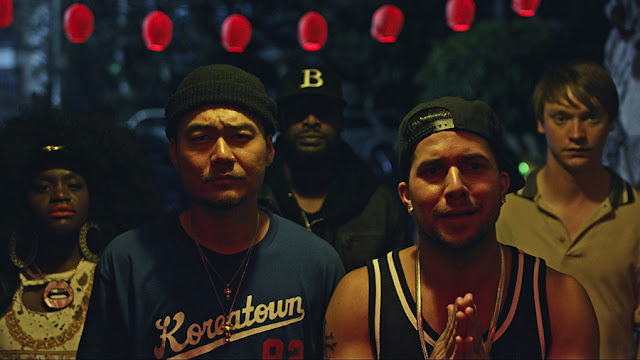 Joseph Kahn’s Bodied follows Adam (Calum Worthy, American Vandal), a nerdy white college student. Fully entrenched in the PC world of academia, his thesis focuses on the use of the granddaddy of all racial slurs in the world of underground rap battles. Immersing himself in this world, he, along with his mentor Behn Grymm (Jackie Long), discovers a penchant for sick rhymes and ill burns that outrages everyone around him and throws his coddled, carefully manicured life into chaos.

After making the rounds, Bodied plays as part of the Seattle International Film Festival, and SIFF missed the boat not making this a midnighter. Akin to Scott Pilgrim for the underground hip hop set, it’s tailor made for a rowdy, amped up late-night audience. 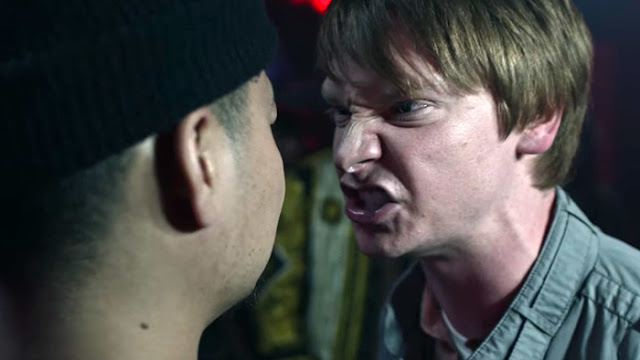 At a hair over two hours, the momentum flags a bit in the middle as the plot wanders too far afield, but when it’s on, Bodied wields an electric energy few other movies possess. At its peak, it offers a hilarious, astute skewering of everything from PC hypocrisy that’s more closed-minded than overt bigotry to misogyny and racism. As Adam tears his way through one battle after the next, it watches like an underdog sports saga spiked with verbose adrenaline.

The middle act notably drags. Overlong and overfull, especially in comparison to the crackling pace of the beginning and end, things grind way down. Certain threads add unnecessary bloat to the plot. Like a through line with Adam’s father (Anthony Michael Hall). While it has a few laughs, it only exists to demonstrate his privilege, which is so readily apparent in so many ways it’s becomes overkill. And for one sick burn. An arc with his girlfriend, Maya (Rory Uphold), also runs its course, but gets trotted back out to similar redundant effect. In general, between the bookends, there are a bunch of scenes the length settles in. 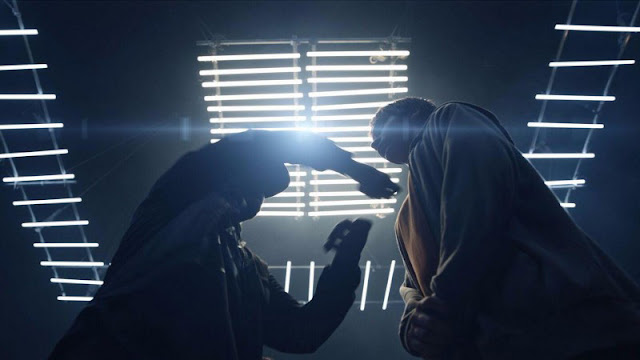 Most known for his work as a music video director—he’s worked Taylor Swift, Kelly Clarkson, Britney Spears, Bodied producer Eminem, and countless others—than films like Torque and Detention, Kahn puts his chops to good use. Bodied has the propulsive force and energy of a music video. He flashes videogame-like stats and graphics on the screen during faceoffs, superimposed over the action, though this flourish disappears for long stretches.

While Bodied often delivers an absolute full-facial blast, it tries to have it both ways but ultimately falls into its own trap. With a keen eye and clever wit, the script eviscerates hypocrisy, white guilt, cultural appropriation, and the underlying prejudices that exist no matter the expressed intentions. But the moment when the protagonist has his epiphany, when it truly hits him that his words, even words uttered in the heat of pitched battle, have consequences and he pays a high cost, it’s fleeting. Moments later he tells an Arab dude go make falafel and it all rings empty. 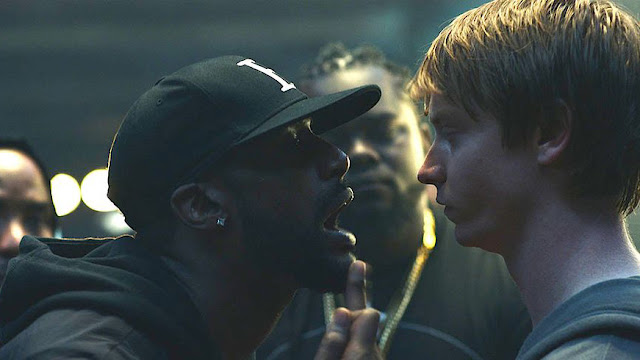 Not for the easily offended, Bodied lit audiences on fire when it burst onto the fall film festival scene last year. And with good reason, it’s an absolute banger to watch with a jacked up crowd. I don’t love it quite as much as many; it meanders around for too long in the middle and doesn’t have as much to say as some claim—in trying to take on everything, it essentially says nothing. Still, it’s a wild fucking ride, even if it doesn’t really go anywhere, and it works best when Kahn just lets it rip and run free. [Grade: B]

This is an extended version of a review from the Seattle International Film Festival.