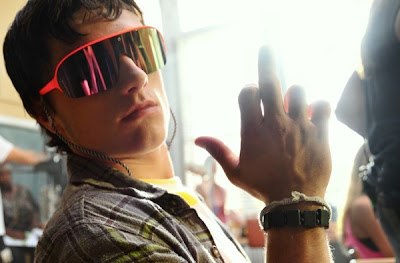 Is it time to start wistfully longing for the 1990s already? Since “Take Me Home Tonight”—which oddly enough I did enjoy—was pretty much the last nail in the 80s nostalgia coffin, it makes sense that things would start moving in that direction. That’s the definite impression that you get from “Detention”, Joseph Kahn’s first feature film since 2004’s “Torque”, though he’s stayed busy working music videos for high profile pop artists. The movie is a mash up of horror, time travel, and teenybopper comedy, and doesn’t so much have plot as a lot of excuses to reference earlier days of music, fashion, and popular culture. You’ve never seen so many nods to the Backstreet Boys.


Riley Jones (Shanley Caswell) hates her life and wants to die. She hates her suburban high school, her 90s obsessed bff, Ione (Spencer Locke), suddenly started hating on her, and her dream boy, the ironically clad, skateboard riding Clapton Davis (Josh Hutcherson), doesn’t know she’s alive. To make matters worse, there’s a masked killer on the loose, and even though he’s targeting Riley, no one believes her because she’s not popular enough to be killed. So she has to find out who wants her dead, solve her romantic woes, and figure out something do about prom. That is, until Principle Verge (Dane Cook), throws all the potential murder suspects into a “Breakfast Club” style Saturday detention. Then there is a time traveling bear, which I have to say is a nice touch.

“Detention” is a fun little romp at first, but the kitsch wears thin before long, especially when you realize that it is just a shield for nonsensical oversimplification of a generation and an excuse to pretend that empty stereotypes are something more. It is a little bit “Heathers”, a little bit “Scream”, and a little bit “Mean Girls”, all thrown in a blender and poured in a “Donnie Darko” mold. A good comparison might be a less nerdy “Scott Pilgrim”. It is a cheeky, self-aware film that attempts to lampoon other cheeky, self-aware films, only to cover well-worn territory, poking fun at things that have already been poked and prodded and parodied and sent up time and time again. Riley is a caricature of the overly serious high school girl—she’s a vegetarian who wears a homemade “this is what a feminist looks like” t-shirt. That’s teen movie code for “this girl cares about important things”. Essentially she’s the exact same character as Janey Briggs (Chyler Leigh) from “Not Another Teen Movie”—you know, the cute girl who is supposed to be ugly and unpopular—only ten years after the fact.

The script is not as clever as it thinks it is, and does things like compare “Avatar” to “the Smurfs”, something “South Park” already did a couple of years ago. The random antics and constant asides, like a football player who pukes acid and has fly blood, can’t distract from the fact that the plot never really goes anywhere or does anything, and that most of the movie is a bunch of hollow theatrics that amount to very little. In reality it is just as shallow as it wants to be deep.

After having a trying, to say the least, experience with the studio on “Torque”, Kahn financed “Detention” independently for a proverbial song. It feels like an ADD riddled mess, where Kahn and writing partner Mark Palermo toss in every joke, gag, and bit that they can think of, regardless of how it will impact the larger flow and structure of the movie. Occasionally this benefits the film. Some of the bits work, and are a lot of fun, like the story of Elliot Fink (Walter Perez), a mysterious student that shows up out of nowhere and has been in detention every day for 19 years. And again, there is a time travelling bear! That’s always a good idea. But for every up there is a down, for every peak there is a valley where the movie falters and falls flat on its face.

You can tell that Kahn intends “Detention” to be a big middle finger to critics and movie industry folk. When he came out to introduce it at SIFF, he made sure to note that anyone in the audience taking notes shouldn’t bother, that they would just hurt themselves, and that undercurrent of antagonism informs the whole movie. Some people are going to love “Detention”, and I’m sure it will spawn many a late-night screening. On the other side of that coin, there are people who are going to hate the crap out of it. I’m not fully committed to either pole. I like the blatant antipathy and combativeness, but in the end I find myself leaning towards the latter camp. After a strong start, the 90s obsession, preciousness, and air of pretentiousness get irritating, and ultimately infuriating. Then again, I’ve been known to be wrong.
Posted by Brent McKnight at 11:28 AM